How do a helicopter's cyclic and collective transfer commands to the swash plate?

I understand the function of the cyclic and collective, and I am specifically wondering if anyone has a good image/video showing the mechanism of how the flight control "mixer" works! I can't seem to find many good illustrations of the mechanisms themselves, even a simple example.

Perhaps something like this but clearer, or something filmed in real life? 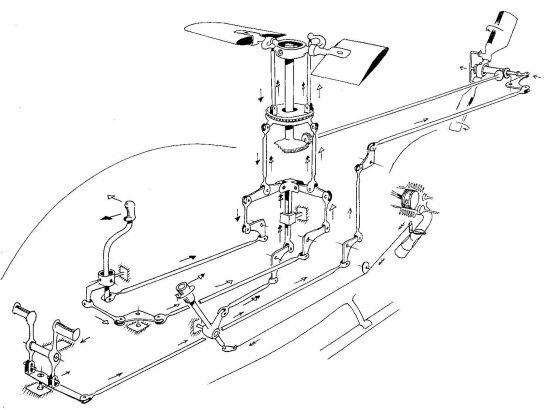 I think I generally understand what is going on, and I understand what the swash plate is supposed to do, and which direction the swashplate actuators are supposed to move for a given maneuver. But what does this look like in real life? Is it typical to have just two actuators to the swash plate? And in this system it seems like adjusting the collective would make the pilot's control column move? Is it common? 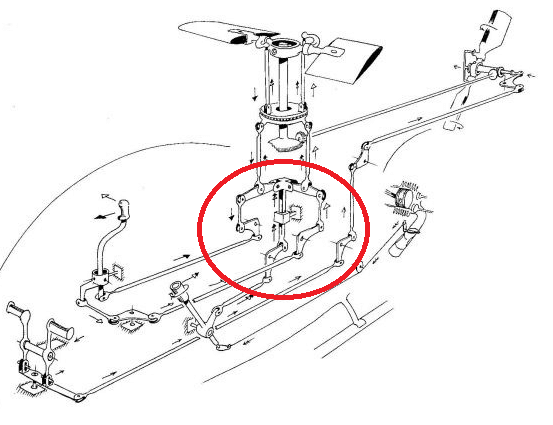 For example, I can understand in this picture that the cyclic stick can move forward and aft (circled in blue), which moves a control rod around a pivot, which lifts the forward actuator on the swash plate. I guess I am mostly confused as to how the collective plays in, and would like other diagrams or images to understand. 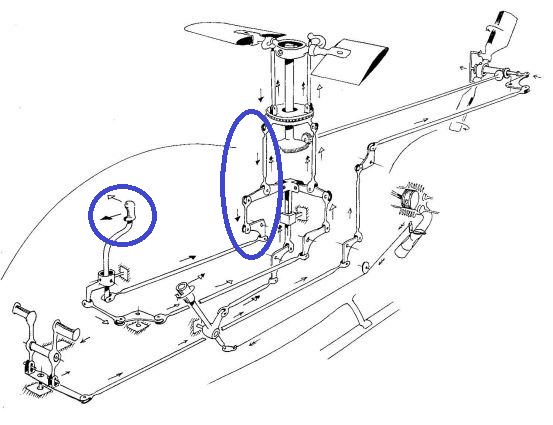 This is an image of a mirrored cyclic linkage as I understood it from @Pilothead: 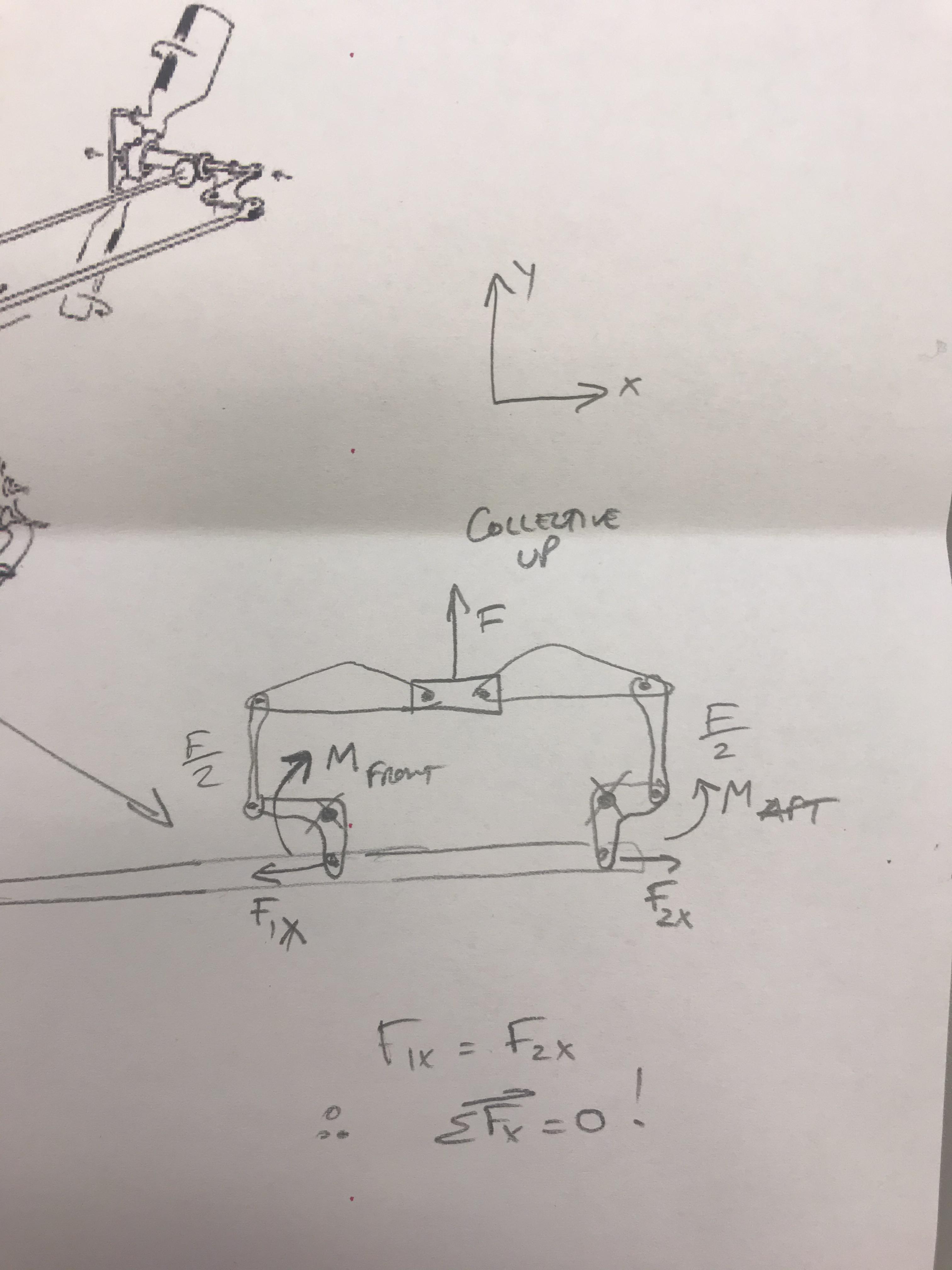 The collective controls climb and descent. This is achieved by increasing pitch on all blades simultaneously, or collectively, explained towards the end of the video. 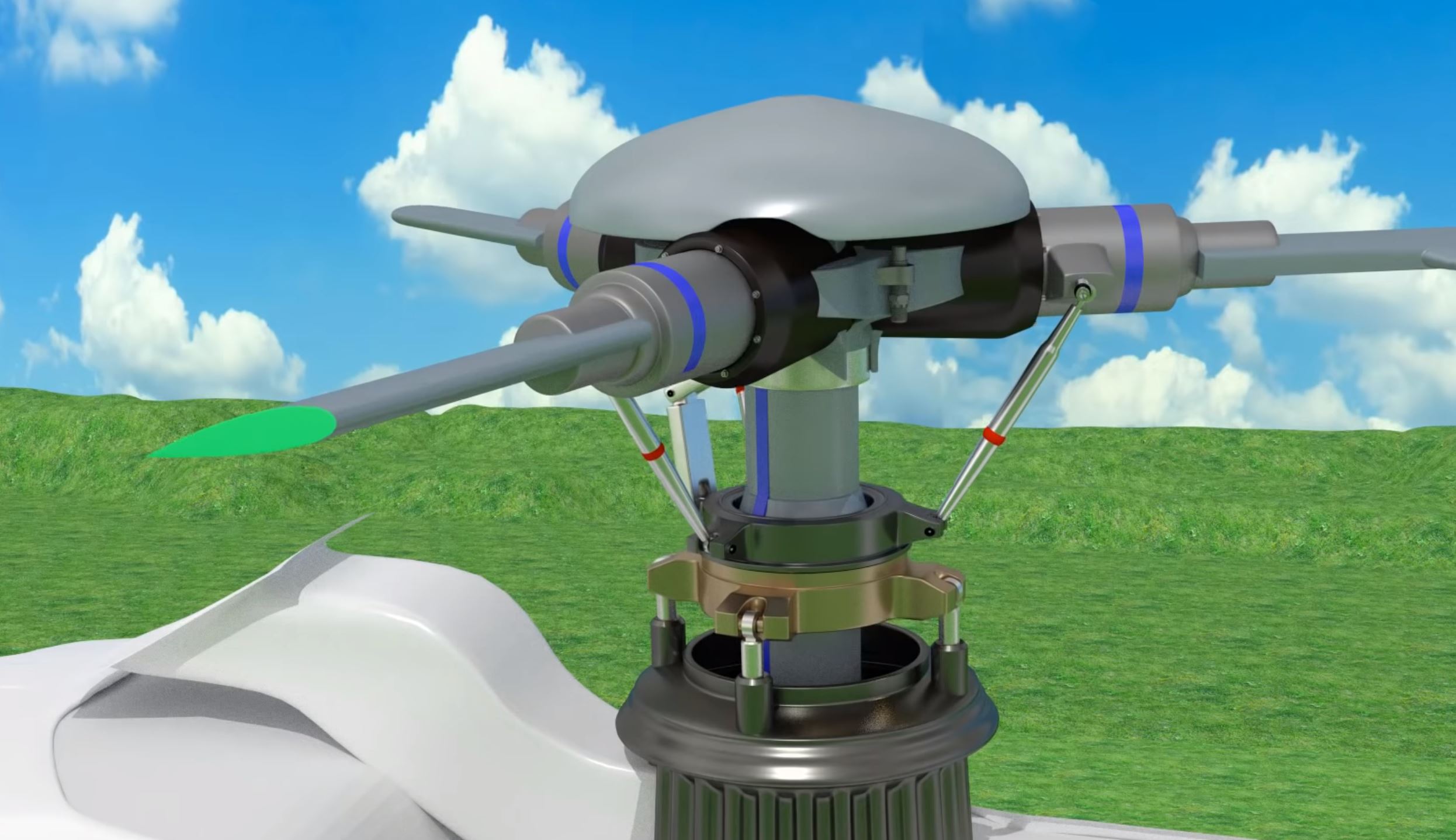 In your diagram, lifting the collective uses linkage to raise the swashplate without tilting it as shown by the arrows. 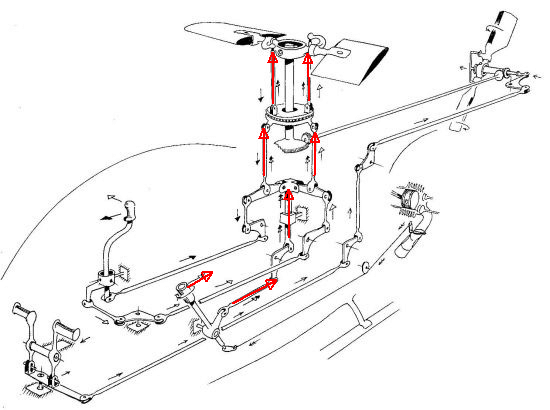 The mixer is mainly found in larger helicopters where their expense is not such a large part of the purchase price. This answer explains more of the function of the flight control mixer: it de-couples degrees of freedom from the control inputs.

The helicopter in OP picture shows unmixed inputs into the swash plate: tilt swashplate forward for longitudinal control, sideways for lateral control, pedals connected to tail rotor only. Picture below is from Principles of Helicopter Aerodynamics by Leishman, and shows a schematic of the cyclic longitudinal 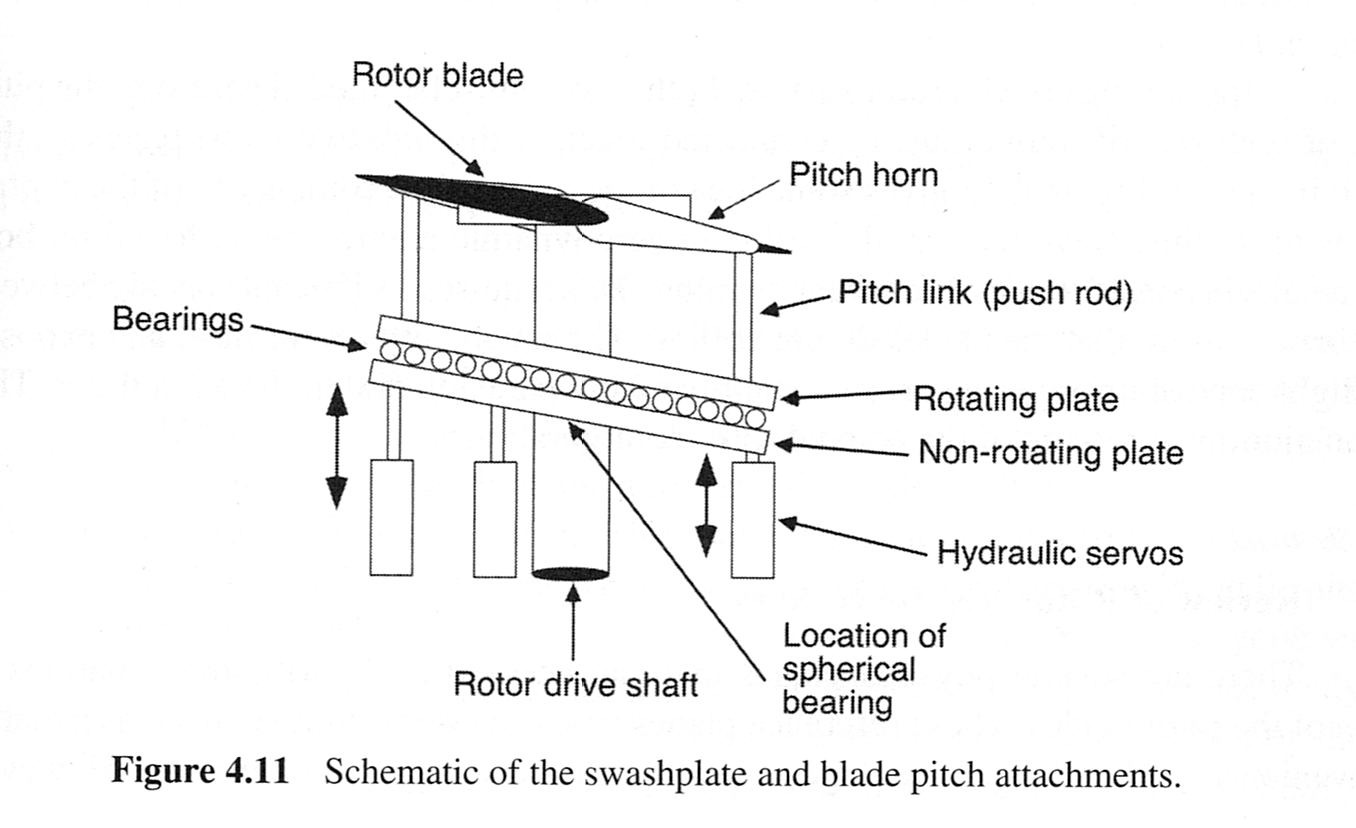 Three actuators are connected to the Non-Rotating Plate, which can be tilted and lifted. The Rotating Plate follows the fixed plate, and cyclically pitches the rotor blades so that they adjust their circular path up/down. The swash plate arrangement is quite complicated, as shown in the photo below, from the same book. 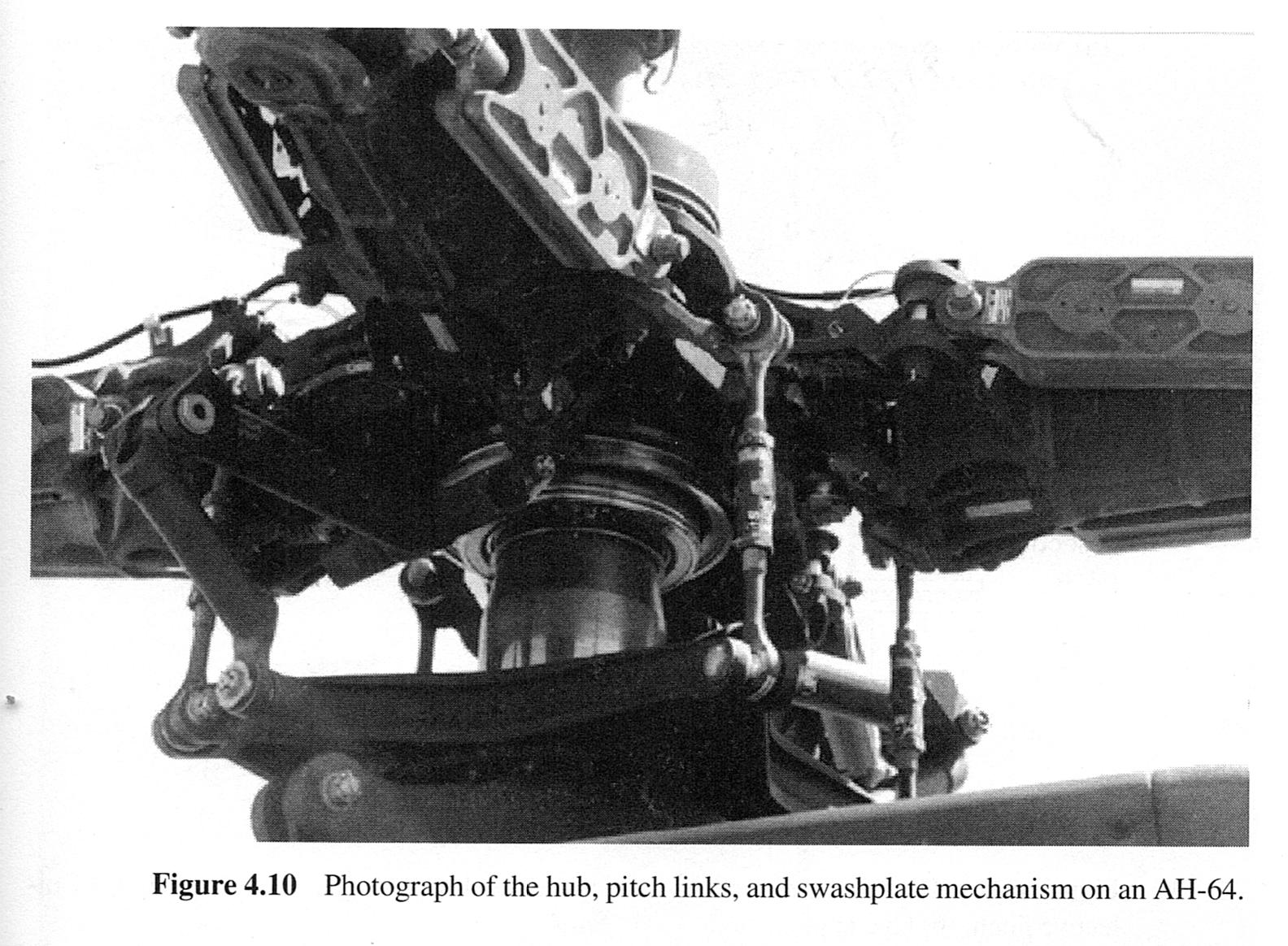 The mechanical linkage from the cyclic and collective sticks to the main rotor actuators does have some input summation involved, as the picture below shows (from this source, which indeed calls it a mixer). 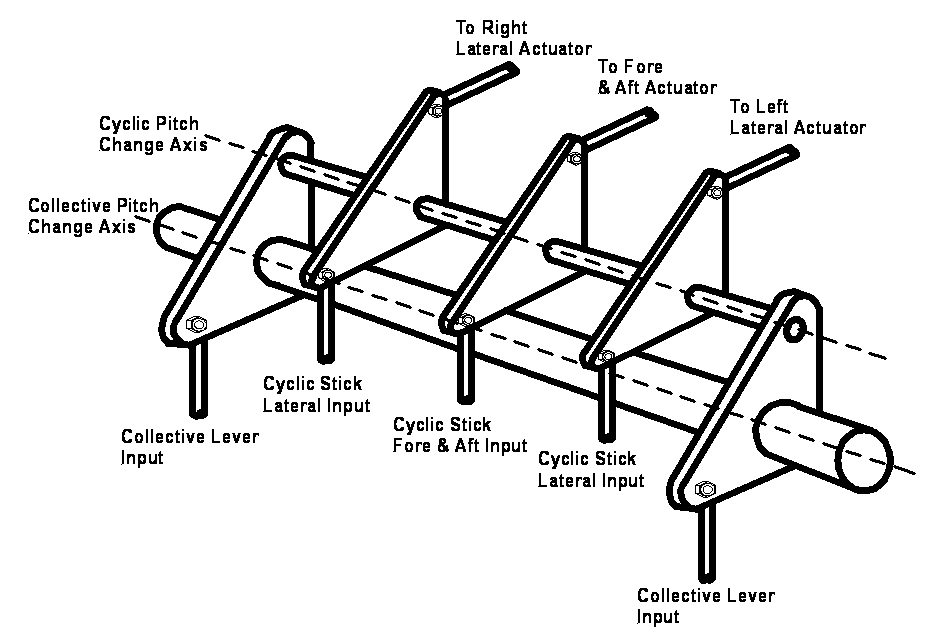 Not the answer you're looking for? Browse other questions tagged aircraft-design helicopter flight-controls rotorcraft fluid-mechanics or ask your own question.

0
How does a helicopter swash plate move?
5
Why do some helicopters have such complicated flight control mixers?

8
How are helicopter cyclic and collective jacks connected?
30
Why aren't there simplified fly-by-wire helicopter controls?
8
Can a helicopter be “stalled” by pulling too hard?
13
Would an aircraft with no ailerons, no elevators and no rudders be safely flyable?
9
Relationship between flapping and lagging frequency
5
Why do some helicopters have such complicated flight control mixers?
3
How are pitching and rolling moments transferred from rotor to the body?
4
How do linear actuators for flight controls work in fighter jets?
1
Can a helicopter be stable without moving the control inputs?