Why can’t the F28 be deiced with one or both engines running?

Recently, I was contemplating Air Ontario Flight 1363, which, despite heavy, wet snowfall while it was on the ground at CYHD, could not be deiced before takeoff, as it arrived bearing an inoperative APU, necessitating (as CYHD, at the time, had no ground-starting equipment available) that one of its engines be kept running the whole time the aircraft was on the ground, and hot-deicing an F28 (deicing it while one or more engines are running) is forbidden. The aircraft eventually took off, and, predictably, crashed almost immediately due to snow and ice accumulation on its wings.

Wikipedia claims that the prohibition against hot-deicing an F28 is to prevent vapours from ingested deicing fluid from entering the cabin ventilation system via the engine bleed air used to heat and pressurise the cabin, but the engine bleeds can easily be turned off before deicing the aircraft, and any residual deicing fluid left in the engine after deicing can be dealt with by letting the engine run for a few minutes to flush out its passages before turning the bleeds back on (and, if necessary, one could start the engine on the side not being deiced at the moment, and route bleed air from there into the other engine to blow out any deicing fluid, or vapours therefrom, that did somehow make it into the bleed-air passages).

The Fokker F28 can be de-iced with engines running, but this was not permitted by the Air Ontario manuals.

The Wikipedia article does not list a source for their claim:

One can however find all details in the final report, which shows an excerpt from a memorandum distributed by Air Ontario's director of maintenance: 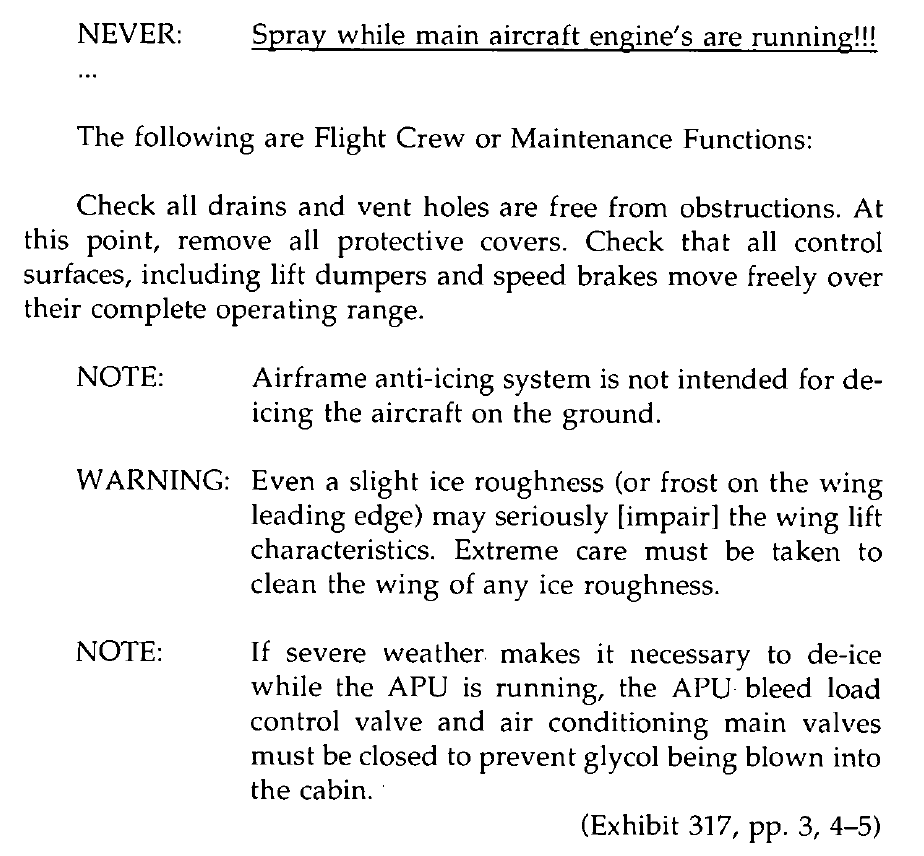 This memorandum was not known to all Air Ontario pilots:

The body of evidence on this point does not support a conclusive finding, one way or the other, as to whether Captain Morwood and/or First Officer Mills received the Fokker cold-weather operation publication or the Mauracher memorandum, which contained, among other important information, the crucial proviso, "NEVER: Spray while main aircraft engine's are running!!!" (Exhibit 317, p.3). What is clear is that a specific pilot bulletin was never disseminated on this point, and there is strong doubt, based on the above-mentioned evidence of Air Ontario pilots, as to whether pilots Morwood and Mills had received the Fokker cold-weather operation publication.

Air Ontario pilots Hansen, Wilcox, Stoger, and Monty Allan testified that they were not aware of specific restrictions against spraying the F-28 for the purpose of de-icing while one engine was running. Only Captain Maybury, who had received the Fokker publications, was aware of such restrictions. In the absence of specific instruction or a company policy on this point, Air Ontario pilots who were questioned in this regard (in particular, pilots Hansen, Wilcox, and Allan) testified that they considered the practice of de-icing with a main engine running unsafe, because of the risk of ingesting glycol into the engine and the danger of having a person in a de-icing bucket in close proximity to a running engine. However, the evidence of experts in the fields of aircraft ground de-icing, aircraft engines, and cold-weather operations indicated that aircraft ground de-icing is routinely performed in Europe and the United States with engines running. Clearly, an operational matter of such importance requires a standard company policy that is made explicitly known to all pilots and operational personnel.

This implies that de-icing with engines running is possible, but without proper guidance or procedures most Air Ontario pilots would advise against it. The report summarizes its finding on this matter: 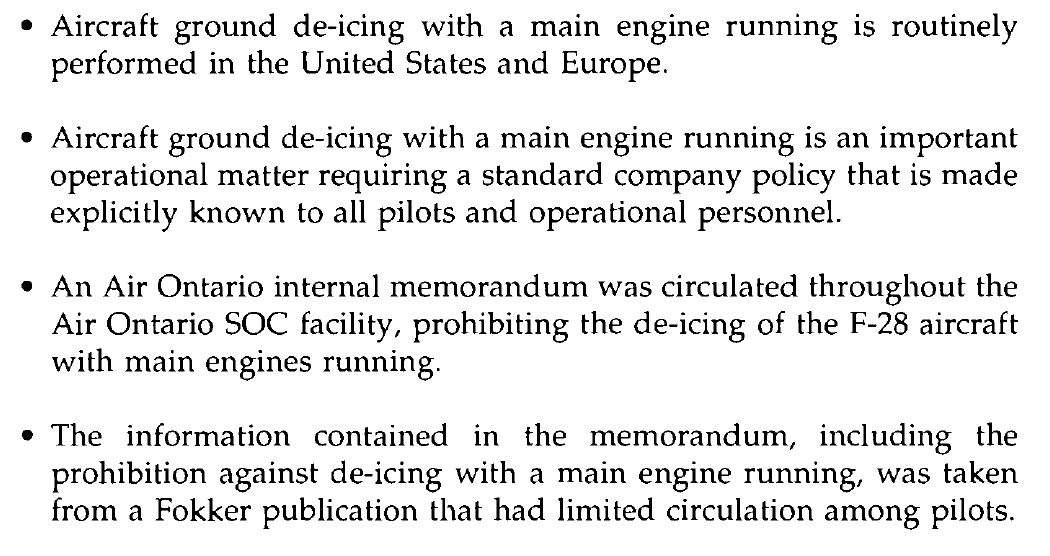 The report does not say however, why the original Fokker publication prohibits de-icing with engines running.

Not the answer you're looking for? Browse other questions tagged engine aircraft-operations deice fokker-f28 or ask your own question.

18
Why do reciprocating aircraft engines have more than one spark plug?
5
Could older airplanes be retrofitted with engines with chevrons?
10
Why would aircraft engines be mounted with “toe out”?
9
How did the F28 have such a good L/D ratio?
32
Why don't airplane piston engines have mufflers?
5
Why do we seldom see small unmanned aircraft with gasoline engines?
2
Are four-engined airplanes calibrated to put out the same thrust for both their inner and outer engines?
4
Why is engine #1 still used when taxiing with one engine?
1
Do pilots turn off the engines during de-icing?