Why do the DC-9’s three-phase electrical systems use separate, unconnected breakers for each phase?

Most of a typical aircraft’s AC electrical system uses single-phase AC, with just one set of wires; however, a few electrical components (primarily heavy motors) require three-phase AC, with three sets of wires. Like any other electrical circuit, each of those three phases is protected by a circuit breaker.

Accepted engineering practice for three-phase circuit breakers calls for mechanically linking together the breaker mechanisms for each of the three phases, so that a fault with any one of the phases trips the other two offline as well (preventing electricity from the non-faulted phases from going places it shouldn’t). Indeed, googling “3 phase aircraft circuit breaker” or the like turns up images and descriptions of breakers with all three phases sharing a single mechanical toggle.

This standard practice was apparently not followed, however, for the three-phase breakers on the DC-9 (or, at least, one particular DC-9; all emphasis and [comments] are mine):

Individual units are protected by individual trip-free circuit breakers. These, when tripped, cannot be electrically reset until cooled. Those units requiring three-phase supply will have individual breakers in each phase. [Page 49/44.]

Another possible source of ignition near the area where the fire was discovered was the flush motor wiring harness. The tripping of the three circuit breakers accompanied by the arcing sounds recorded by the CVR occurred at 1851:14. The three circuit breakers tripped almost simultaneously indicating that the circuitry of all three phases shorted at the same time. The only evidence of wiring damage was found where the flush motor wiring harness passed through the lightening hole in the partition between the amenities section and the toilet section of the lavatory. The damage noted in the wiring harness at this location could only have been the result of fire and heat, and the Safety Board concludes that the damage to the wiring which caused the three flush motor circuit breakers to trip was caused by heat and fire. [Page 60/55. Had the three breakers been mechanically interconnected, they would all have tripped simultaneously as soon as the first of the three phases shorted out, regardless of whether or not the other two had faulted.]

1: No relation to the DC in the names of Douglas airliners, to the comic-book company, or to the seat of the U.S. government.

Your linked Google Images search leads to examples such as this: 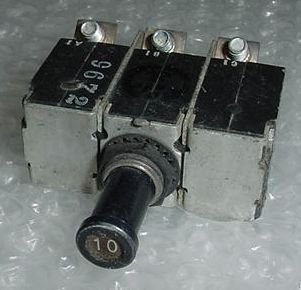 The manufacturer being Mechanical (the company's name). A little dive into the patents reveals this invention: 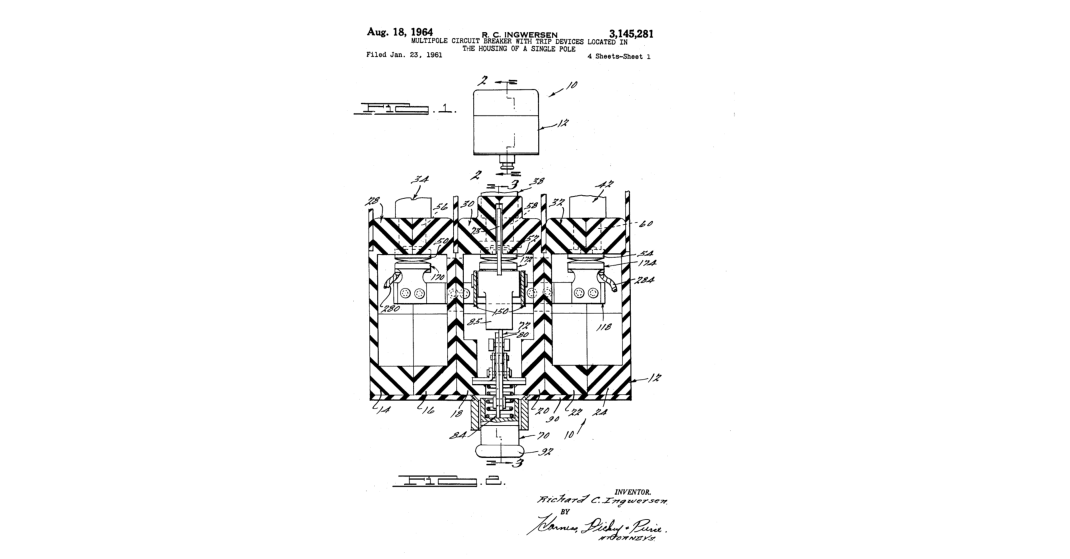 Also by Mechanical, for, you guessed it, a Multipole circuit breaker with trip devices located in the housing of a single pole. And the date was 1964, as shown on the image.

So the conclusion is that the invention was new when the DC-9 was being developed, and if Douglas Aircraft Company used existing proven technologies, say from the DC-8, that would explain why a multipole CB wasn't on that DC-9.

A three-phase electric motor can in some cases continue to run on only two phases but at reduced power, depending on the nature of the load it is driving. Having separate breakers for each phase would allow this.

Not the answer you're looking for? Browse other questions tagged electrical-system dc-9-family circuit-breaker or ask your own question.

10
What crash does FAA SAIB CE-10-11 refer to?
7
Why do airliners still have a switch for the non-smoking sign?
3
Is it possible or has anyone explored the possibility of capturing static electricity for supplying electrical loads on an aircraft?
5
What are the "Start & Acc" and "Pitch stab" circuit breakers for on the Piper Dakota?
6
Why does the B737NG need electrical power for aircraft towing?
1
Why are these steps performed on the A330 emergency electrical checklist?
5
Why is the battery turned off for checking the voltage on the A320?
4
Why is the alternator connected only to one electrical bus in the C152?