I was discussing VOR-based navigation with a pilot, and he mentioned that VOR doesn't provide a very high level of integrity and safety (at least, compared to GPS or DME). He explained that the FAA only guarantees VOR radials listed in approaches and claimed that "one quarter of the radials at Las Vegas are bad".

Are the Las Vegas radials off by just a degree or two or is it worse than that, and how did they get to be so bad? Is it a case of normal variation due to geography and magnetic drift, or is it something more serious like what happened in 2003 to an Airbus A-320-231, G-MEDA on approach to Addis Abeba Airport?

I guess it depends on what you consider to be a "high level of integrity and safety." VOR is a perfectly acceptable means of navigation if you know how to use it. And, I guess, if the transmitter hasn't been flooded.

Let's take a look at the data for the Las Vegas VOR: 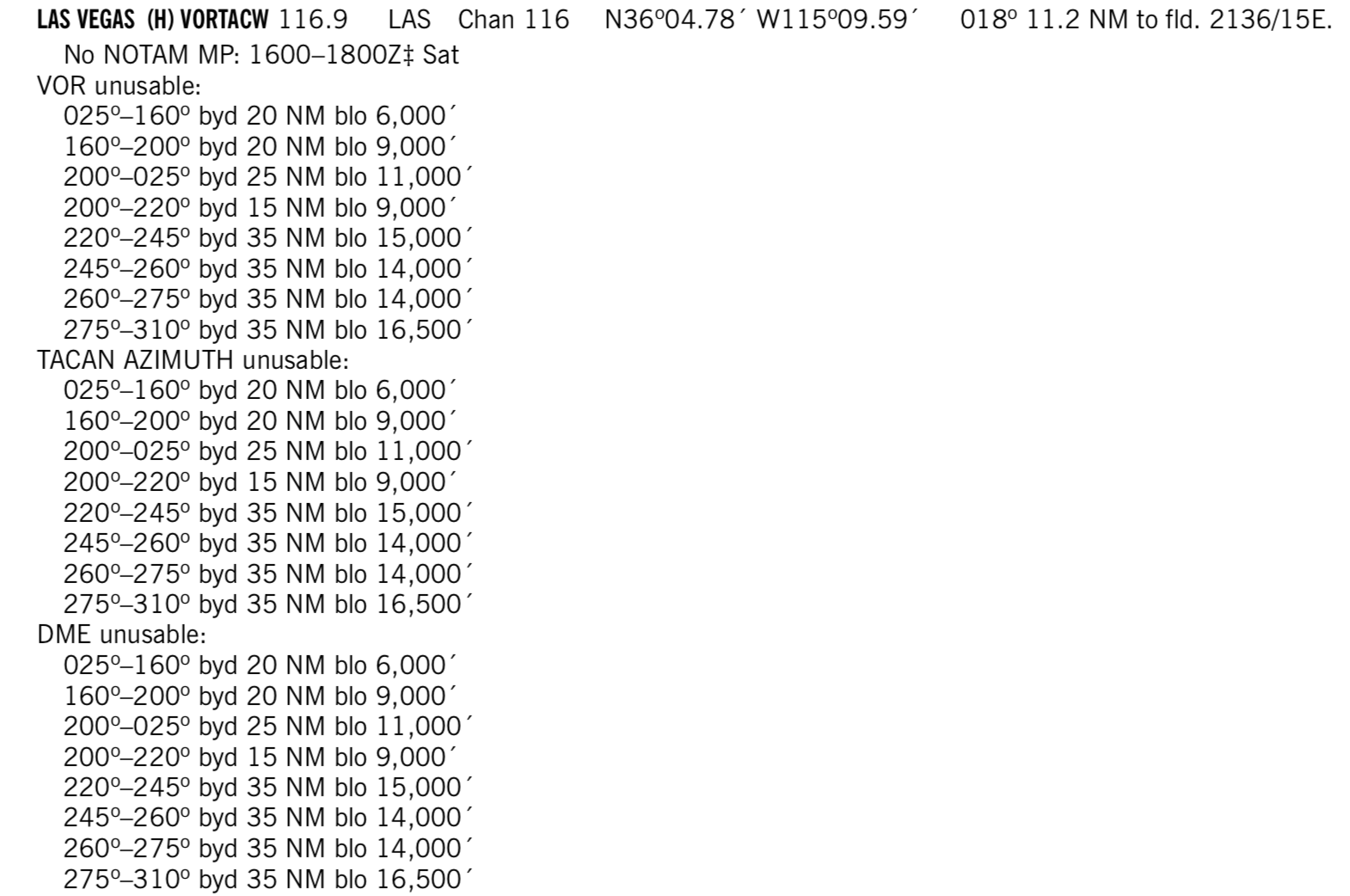 Now, that does look like a lot of "unusable" radials, but it's not actually as bad as your friend claims. First of all, you're not "only" guaranteed service on legs of instrument approaches. You're also guaranteed service along Victor airways, and within a standard service volume. Think about it: certainly you can't expect to pick up the Las Vegas VOR in Florida. So where should you expect to be able to use it? The answer is on flight tested legs (approaches and airways) and within its service volume. According to the AIM, a VOR must "conform to flight inspection signal strength and course quality standards throughout the published SSV". The (H) after the VOR name indicates that Las Vegas is a high-altitude VOR. Let's look at its service volume: 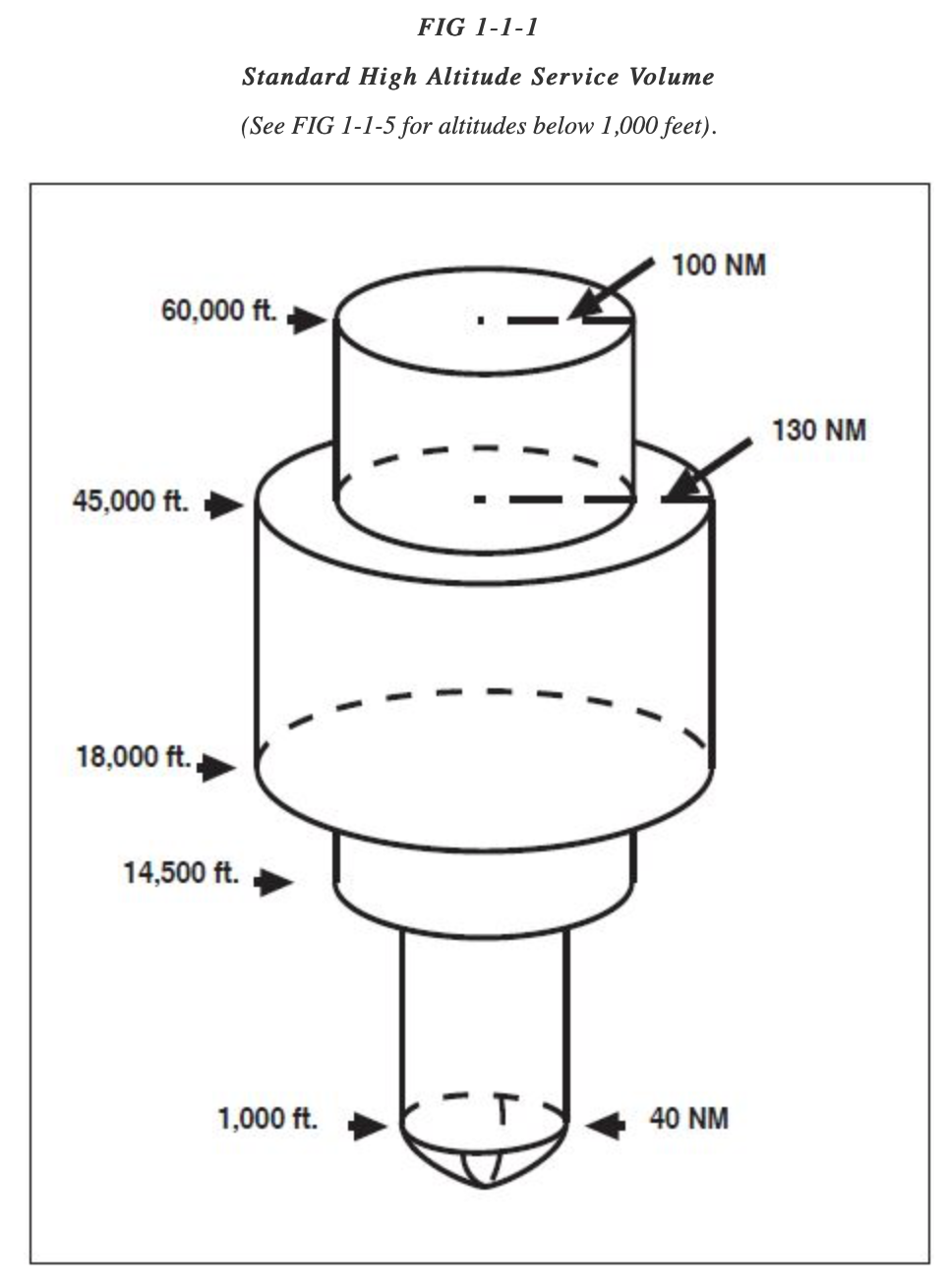 Notice first that the service volume only has a radius of 40 NM to begin with at low altitude. Most of those cutout unusable radials reduce this to 35NM instead. So it's not that much of a cut. And above 16,500 feet? It's all usable, and that's where most of its service volume is. So in fact, the vast majority of the Las Vegas VOR's service volume is usable, that is to say, meeting FAA standards of signal strength and course quality.

Where it doesn't, it's usually because of terrain in the vicinity of the transmitter. As a radio signal, the VOR beacon bounces off of nearby hills and mountains.

Now, what does it look like to the pilot using the system if they're in one of those unusable regions and not receiving an adequate signal? VOR receivers are also FAA approved and if they are not receiving a strong enough signal with enough integrity, then they will display a flag. It should not present totally false data without a flag. The problem with your Ethiopian flight seems to be that the VOR transmitter was transmitting the wrong info, which of course the receiver can't know anything about and it did not flag.

That would be a pretty terrible scenario. That is not what is ever going on around Las Vegas. NAVAIDS in the USA are monitored for integrity. The worst that will happen in a receiver in Las Vegas will (hopefully) be a flag that indicates the receiver is not receiving an adequate signal.

Not the answer you're looking for? Browse other questions tagged safety navigation radio vor radio-navigation or ask your own question.

3
How does CDI work when flying to VOR without DME?
9
How wide is the cone of confusion above a VOR and NDB?
7
Are nearest VOR stations always tuned to?
3
Are VOR frequencies static?
4
Could a pilot navigate using distances and radials from an RNAV waypoint, similar to VOR navigation?
4
How does one reverse direction on a VOR radial?
0
Does an aircraft equipment suffix denote how many VOR radios are installed?
1
How do I do these VOR time and distance calculations?
1
How does the ICAO VOR separation apply to reciprocal radials?
2
Is it allowed and possible to hold at the intersection of two VOR radials using a single VOR receiver?