Can all helicopters hover, and how long does it take to "stop"?

Following the accident of Kobe Bryant's helicopter N72EX, there are a few things that puzzle me:

As noted in another answer, all helicopters can hover, but a so-called "high hover" (out of ground effect or especially at operational altitude) is a more difficult maneuver, requiring more power than a ground hover, and being harder to maintain (because reference points are much further away).

Helicopters generate more lift for the same power when in forward flight, and transitioning from forward to hover requires a well-controlled combination of adding power, adjusting collective, and maneuvering cyclic (in both axes) and anti-rotation controls -- which is to say it's much harder than simply flying forward at low speed. In general, once aloft and flying forward, it's much easier to continue forward flight (it's also safer, since in the case of a failure, autorotation works better if you already have some forward speed).

Hovering on instruments is even more difficult than a high hover -- so if visibility is a problem, it's generally far better to continue forward flight than to attempt a high hover.

Yes all helicopters can hover, but it requires: 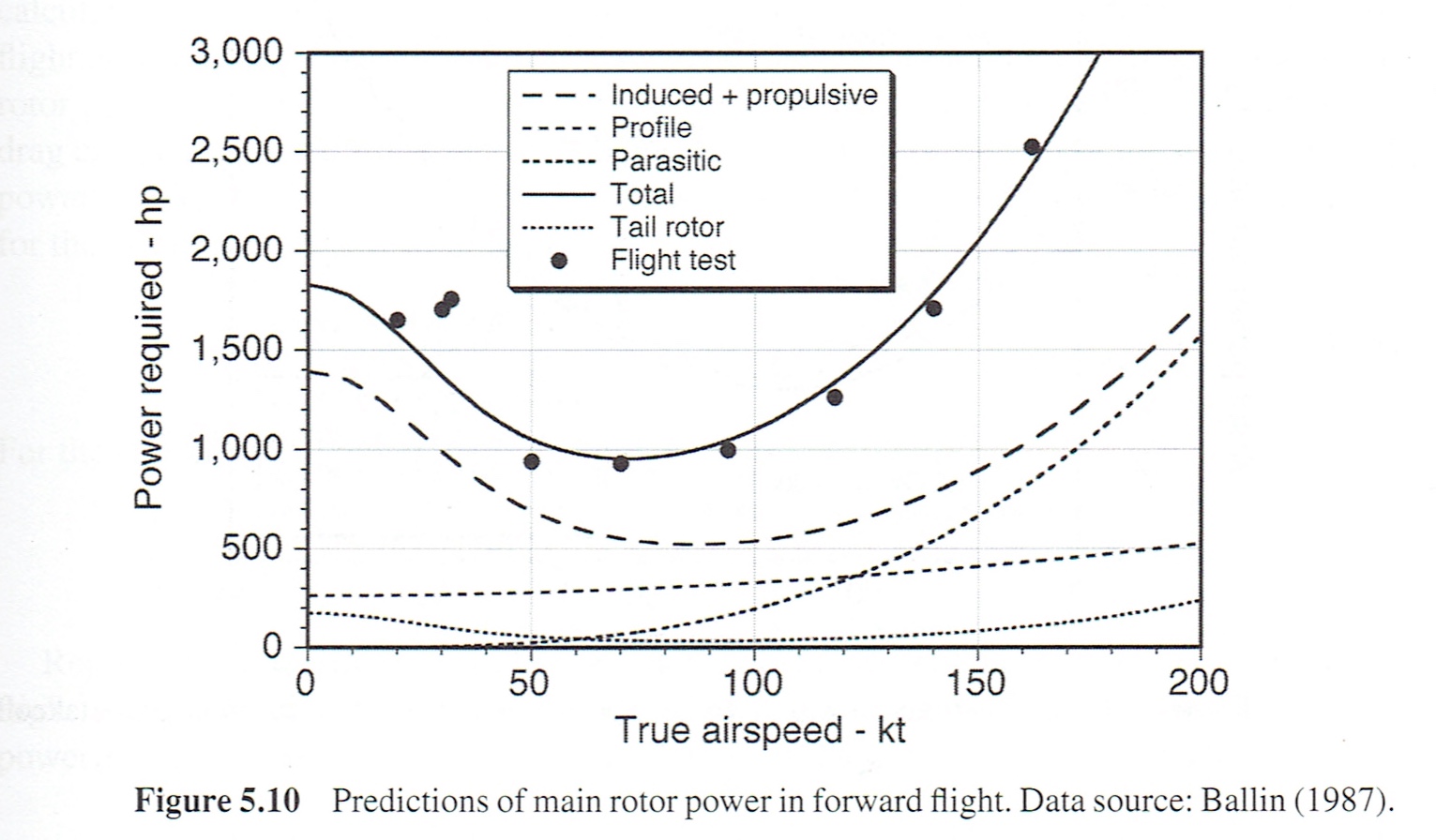 In order to hover, available power must be larger than required power. Available engine power reduces with increasing altitude due to the decreasing air density, and this results in helicopters having a hover ceiling, where power available is equal to power required.

Ground effect reduces required power, resulting in two hover ceilings, In Ground Effect and Outside Ground Effect. But even below the OGE hover ceiling, it is simply safer for a helicopter to pick up forward airspeed shortly after takeoff:

When navigating WX in a helicopter, it is often less workload to fly orbits. It gives additional perspective and permits easy lateral movement during the course of the orbit. It also reduces configuration changes, and possible power changes, as the aircraft can be kept in translational lift.

IFR hold navigation for helicopters is essentially identical to airplanes, and regular holds on an intersection or navaid are assigned by ATC. This is for informational purposes relative to the OP question, because in the example the helicopter was VFR or SVFR and a conventional instrument hold would not be used unless an IFR clearance was issued. Hovering in one spot with no visual reference cannot be readily accomplished. Most helicopters are not instrumented for a totally IMC hold. For example, small motion inline with the longitudinal cannot be accurately determined with the instruments normally used for IFR flight. While GPS/IMS/FMS could provide that information, it is not conventionally done. In short, a helicopter flies IFR like an airplane and hovers with visual reference.

In summary, an orbit allows better visibility in all directions and therefore better situational awareness, and it does not require a configuration change, and it requires less power per unit time if the airspeed is in a reasonable envelope.

When a helicopter hovers, it's basically is sitting in its own wash. By pushing air down, it creates a low pressure region above itself, and a high pressure area below it. To stay hovering, it has to draw air from the low pressure area and push it into the high pressure are below it, which takes a lot of energy. If it instead flies forward, it encounters fresh air without (as much of) a pressure differential to fight.

This is a phenomenon for all heavier-than-air aircraft: the faster they fly, the easier it is to produce lift.

Question 1: No, an S-76 can hover, but it's more energy intensive than economy cruise. It made more sense to circle and hold in an area as opposed to hovering. In addition, hovering at altitude can be hazardous in the event of an engine or tail rotor failure and having some forward airspeed can aid in making an autorotative landing, if needed.

Question 2: What brought about the accident is speculative until the NTSB releases its report. We won’t get a definitive answer until then. We do know that the entire Los Angeles basin was reporting low overcast and both KBUR and KVNY were reporting IFR weather condition locally. The helicopter holds clear of KBUR Class C until it receives a special VFR clearance, then heads northwest, skirting around the edges of the KVNY Class D surface area, turning left to head south toward Calabasas and following CA101 through the canyons at a high rate of speed, around 120 KIAS. One of the last ATC interactions was to tell SoCal approach that he was maneuvering to avoid clouds. Exactly what factors led to the accident at that point is unknown, though as a pilot I have a few theories. It appears as though the pilot was flying in SVFR, but with helicopters, the visibility can be as low as 1/2 mile (800 m) for SVFR operations. Being in a narrow canyon with marginal weather conditions and attempting to fly at a high rate of speed, there probably weren’t very many options left if the canyon became socked in.

Not all can hover indefinitely.

A fully loaded Soviet era MI-24 Hind attack helicopter could only hover for 15-20 seconds, before the engines are damaged from the overload.

US intelligence agencies wondered why the Hinds always seemed to make a running takeoff rather than pull up in a hover to take off, until they got their hands on one and found that out.

As many of the other commenters here mentioned, it is much easier and lower work load for the pilot to fly forward than hover. It also takes more power from the engine to hover than it does to fly forward, and this largely has to do with the effects mentioned above about having to pull air from above the rotor to below. That also saves me quite a bit of gas. One thing I do not see mentioned here is that it is also significantly safer to fly forward than hover, in the sense that there is a much larger margin for error in forward flight than there is in a hover, and I'm going to make an effort to explain.

Helicopters, in the case of engine failure, can auto-rotate. This basically means you're "gliding" the helicopter (it works like those sticks with a propeller on them that you spin between your hands and they fly a little bit). Auto-rotating while moving forward is much easier to do, and is much more gentle, than auto-rotating in a hover. If I auto-rotate in a hover, I first have to convert some altitude into moving forward, and once I'm doing that, I can "glide" towards the ground. When I get near the ground, I convert the forward speed I now have into the rotor, so I basically come to a stop and a gentle landing. What does this mean, in practice? It means that if I'm moving forward, I can auto-rotate at any altitude. I can auto-rotate anywhere from 20ft to 15000ft altitude. If I'm in a hover and have to auto-rotate, I will probably need somewhere between 200-500 feet of altitude to successfully auto-rotate and land safely. When I'm flying, I'm comfortable hovering very near the ground (1-30ft) and I'm comfortable hovering at 500ft+. I'm far less comfortable (from a safety perspective) hovering at 250ft than I am at 1000ft.

TLDR;
I tend to think of the rotor spinning as a "battery". If the rotor stops spinning, I have no energy, and I will fall out of the sky. The rotor is constantly using energy to keep me flying, and that use of the rotor's energy will slow it down. I can add more energy into the rotor by using the engine, but I can also convert both forward movement and altitude into spinning the rotor. If I lose the engine, I will start to descend to keep the rotor spinning until I get near the ground. Now there's no free lunch, so what I can't do is trade my altitude for rotor speed, and then use exactly the same energy to trade my rotor speed into stopping my fall. It has friction, etc., and so I will hit the ground VERY hard if I do that. What I can do though, is be moving forward too! So now I'm moving forward, and I'm trading altitude for rotor speed, which basically means I'm falling slowly (descending). When I get near the ground, I can slow the helicopter's forward movement, and convert the forward energy into rotor speed too! This means I can stop moving forward, and as a result, have a very soft landing. That is why I can't auto-rotate from a hover easily. First, I have to convert some of my altitude into moving forward, and only then slow down my descent as I get near the ground. Then I convert that forward movement into making my landing nice and gentle. Converting that altitude into forward movement will take me about 200-400ft, which is why helicopter pilots don't like hovering at low altitudes.
END TLDR;

All helicopters can hover. That's the key advantage of that type of aircraft over the autogyro. Almost all rotating-wing aircraft are today helicopters, with only a relatively small number of autogyros still around. The most advanced autogyros of the 30s, before helicopters existed, were capable of vertical take-off and landing, but could not hover.

Some interesting information that I was told by a very experienced helicopter pilot today... things that aren't obvious...

At low airspeeds, aircraft will warn the pilot with a stall warning horn that flight characteristics are about to drastically change. Helicopters do not inform the pilot when the helicopter is transitioning from forward flight into hover. It's up to the pilot to know this.

This is important to keep in mind, because the S76 in question had flown into fog. Zero visual references. It had also entered a climb and lost airspeed, enough to where it appears to have transitioned from forward flight (where it has the natural stability of an aircraft) into hover with zero stability.

The instruments in most commercial helicopters are the same as in an aircraft, and thus only useful if the helicopter has sufficient forward velocity to be in forward flight mode, i.e. > 30 kts for an aircraft the size and weight of the S76. One cannot hover a helicopter with aircraft instruments, on instruments alone. They are not precise enough. Some military aircraft have additional instruments that provide the precise attitude and acceleration information to allow hover with zero visual references, typically SAR or special ops birds.

What I didn't know until today: a helicopter with aircraft style instruments cannot be successfully hovered in IMC conditions on those instruments alone. Absent visual references or helicopter specific instruments, it will become increasingly unstable and crash. And do so fairly quickly, like within 30 seconds.

Not the answer you're looking for? Browse other questions tagged helicopter hover or ask your own question.

73
Do helicopters use more fuel when hovering?
34
Why would a helicopter climb in a spiral?
24
How do modern helicopters tackle Vortex Ring State?
6
What is the significance of hover performance in helicopters (HIGE, HOGE)?
-1
EVTOL(Electrical vertical takeoff and landing) aircraft holding pattern
0
Why do helicopters crash in low visibility (IMC)?