What is the stall AoA for the space shuttle?

As far as I can tell, NASA has never given a straight-forward answer to this question. The theoretical stall AoA is likely in the 33-40° range (see reason for that guess below). However, at operational airspeeds, the orbiter becomes aerodynamically unstable at a lower angle of attack than the stall angle. Therefore, the stall angle never mattered for shuttle operations.

Just to be clear, this answer is only referring to the very late phases of shuttle flight (TAEM and approach and landing). The 40° of early entry might be beyond the wings' stall angle, but it doesn't really matter since dynamic pressure is low and the shuttle is on more of a ballistic trajectory.

What does NASA say?

From an old NASA answer to this question:

The question: "What is the Space Shuttle stall speed?" is a bit of a trick question because, as a delta wing aircraft, the Orbiter does not have a clearly defined stall point.

From The Aerodynamic Challenges of the Design and Development of the Space Shuttle Orbiter document: 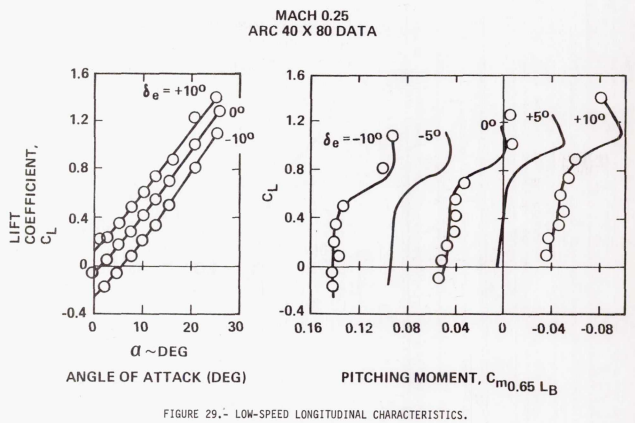 The diagram on the left shows that the lift coefficient continues to increase through at least ≈25° angle of attack (meaning the stall angle must be greater than 25°). δe = elevon deflection.

The only* reference to stalling in the Shuttle Crew Operations Manual is this diagram which depicts a stall speed (not angle). The NASA answer I referenced before gives more context to this graph. 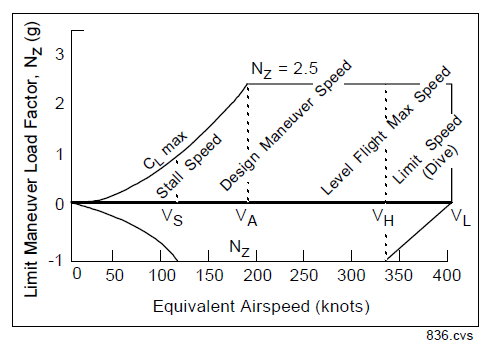 *There are a couple references to elevon stalls in the Operations Manual, but I'm not counting those.

Why does the stall angle not matter?

As we've already seen, the shuttle would exceed aerodynamic/structural limits before reaching the stall angle of attack at most airspeeds. Additionally, there are a couple other reasons for not worrying much about the stall angle.

Guidance always aimed to keep the orbiter on the "front side" of the L/D curve. This means that guidance would never command an angle of attack higher than required for "best glide". If it needed to dump energy, it would do so by deploying the speed brake and/or pitching nose down. It would never dump energy by pitching up (except during the flare). If the orbiter was low on energy, it would pitch for best glide. This means airspeed would always stay high and in the range where other factors are more limiting than the stall angle. Pitch-up maneuvers would be limited by dynamic pressure and Nz (normal acceleration — g's).

The only time the shuttle fell into the "back side" of the L/D curve was during the flare and landing. Incidentally, touchdown speed appears to be roughly the speed where the orbiter is finally slow enough that it might actually stall before becoming unstable for other reasons (see "VA" in the graph above - this is "maneuvering speed", just like in airplanes). However, at touchdown, the limiting angle is the tailscrape angle (15°), which is much lower than the stall angle.

Although not operationally significant, I think the specific question you're trying to ask is: what AoA produces the maximum lift coefficient? Generally speaking, that's considered the stall angle for most airfoils, since increasing AoA beyond that point results in decreased lift.

While I don't have a lift coefficient graph for the shuttle which goes beyond 25°, this paper discusses the results from studies on various delta and double-delta wing designs. 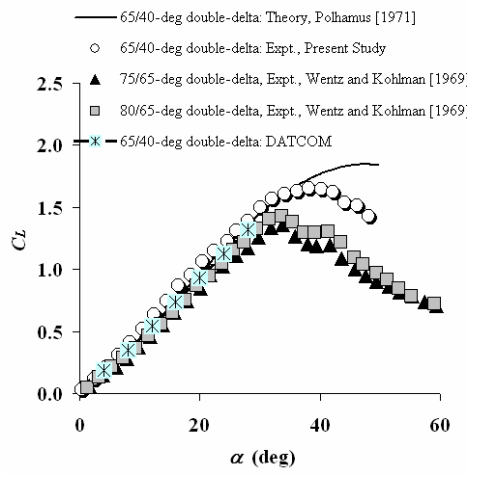 None of the studied designs have the shuttle's exact 81/45 sweep angles. However, given that they all have a maximum lift coefficient somewhere in the 33-40° AoA range, I suspect the shuttle was similar. I can't prove that unless someone finds the appropriate data. I'm certainly not an expert on delta wings, so my interpretation could also be wrong.

Not the answer you're looking for? Browse other questions tagged stall angle-of-attack space-shuttle or ask your own question.

61
How does the Space Shuttle slow down during re-entry, descent, and landing?
10
What determines the best glide speed?

31
What is the immediate cause of stall?
61
How does the Space Shuttle slow down during re-entry, descent, and landing?
4
How much can falling down due to a stall influence the angle of attack?
20
Why would landing the space shuttle on water have been unsurvivable?
6
Why is the A330/A340's angle-of-attack protection disabled in alternate law, even if the AoA vanes are operating normally?
5
Could the Space Shuttle take off like an airplane?
3
What effect does the Space Shuttle have on the Shuttle Carrier 747
0
What is stall speed exactly?
3
Would the front rudder of the Wright brothers really have helped in recovering the glider from a stall?
5
Why angle of attack is always shown against the relative wind parallel to horizon?