Why are the colors of the MiG-15's attitude indicator inverted?

Why are the colors of the MiG-15's attitude indicator inverted (blue on the ground side, brown on the sky side)?

That attitude gyro reacts in the opposite manner to pitch movement (pitch down = horizon line rolls DOWN) compared to the "conventional" manner (pitch down, horizon line rolls UP). This is sufficiently confusing that on similar gyros of American manufacture, the words CLIMB and DIVE are printed on the "ball" inside the gyro case to remind the pilot what the instrument is telling him or her.

The "opposite" reading gyro horizons were commonly used in American fighter aircraft because their construction made them more resistant to tumbling than were the "conventional" reading instruments, which were used in civilian aircraft.

After WWII, those opposite-reading gyros wound up on the surplus market and a number of them were installed in civilian aircraft, including the Beech Bonanza that was carrying Buddy Holly, Ritchie Valens and the Big Bopper on the night of their crash. The pilot had trained in a plane with a conventionally-reading instrument in its panel and the accident report claimed that he was confused by that opposite-reading gyro in the dark, thinking he was trimming for an 800FPM climb when what he was really doing was trimming for a descent- and minutes after takeoff, the plane flew smoothly into the ground and everyone aboard was killed.

I have an example of both types of gyro horizon in my collection, and even when they are not spinning, simply tilting their cases in unison demonstrates the difference: one rolls up, the other rolls down when you pitch them both down.

This is interesting! The only lead I was able to find (so far) is this discussion thread, with a comment:

The colour becomes logical, if you see it moving. Climbing the plane which shows the sky in blue on the artificial horizon. Ground being brown/earth, if you see this, the nose of the plane is pointing downwards

And the explanation for arranging the colours in this way is, plausibly (same discussion):

It makes the instrument less complex. The way it is built means you do not have to invert the pitch axis movement of the gyro, which is the case for "conventional" artificial horizons.

If you want to build the simpliest possible attitude indicator, you take a gimballed gyro and attach a sphere with horizon line and some kind of metering lineage on it. This sphere will maintain its position in relation to earths surface. With roll it is self explanatory, it will indicate the tilt of the horizon as it will appear if you look outside. Indicating pitch is not as simple. As you pitch up, the horizon line will move up on this simple AI. Now that's not very intuitive. Pitching down, the line goes down. Again, not that intuitive! 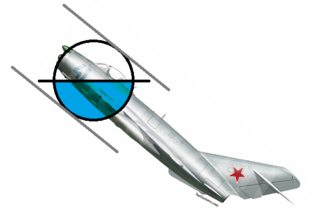 Note how the pilot would see the bottom of the sphere: more blue (source; edited)

You can see the "reversed" AI rolling as described above in the youtube video embedded in the question, approximately 19:10 onwards, as the pilot is doing some maneuvering.

Not the answer you're looking for? Browse other questions tagged flight-instruments attitude mig-15-17 or ask your own question.

19
How is a confusion possible between Western and Russian Attitude Indicators?
9
Were the original gyroscopic artificial horizons "upside-down"?