Is night VMC still VMC if the underlying terrain is completely unlighted?

The whole point of visual meteorological conditions (VMC) is that there is sufficient visibility for a pilot to be able to safely fly by visual reference alone, without reference to instruments. This, by necessity, requires a visibility of at least one to several miles, plus staying a good distance away from any clouds (the exact visibility and cloud-clearance limits depend on the jurisdiction, but all have at least some minimum requirements for these factors); so far, so good.

In many countries, however (including a lot of the big ones, such as the US, Canada, the UK, Australia, France, Germany, and New Zealand), VMC is still VMC even at night, and night VFR flight is perfectly legal (albeit with somewhat greater restrictions on who can fly VFR at night and the qualifications necessary thereto) if the visibility and cloud-clearance requirements are satisfied.1

The underlying assumption is presumably that pilots will still be able to avoid flying into the ground (in either controlled or uncontrolled manner), or each other, by reference to ground lighting and each others' anticollision lights, but this line of reasoning breaks down if you fly over unlighted terrain (of which the countries permitting night VFR flight have quite a lot), especially if it's a moonless night. If it's well and truly nighttime, the moon is either a thin crescent or completely absent from the sky, and the terrain is devoid (or nearly so) of light sources, the ground will be almost completely invisible, with the only hint of its presence being its occlusion of the background stars, and it is difficult to imagine how one would be able to maintain terrain clearance (especially if one's aircraft lacks a radar altimeter). Even worse would be if the stars (and moon, if present) were obscured (by, for instance, high clouds, or smoke from forest fires), in which case one would have no external visual reference at all;2 a non-instrument-rated pilot would find it essentially impossible to maintain control of the aircraft in these circumstances, just as if they were trapped inside a cloudbank during a daytime flight, and even a pilot who is proficient in instrument flight would have difficulty maintaining terrain clearance, especially in mountainous areas (which, inconveniently for our pilot, tend not to be densely populated, and, thus, are rather more likely to be unlighted than flatter terrain).

To eliminate this problem, does the definition of night VMC (in the US or any other jurisdiction) require that the terrain in the area be lighted sufficiently for it to be visible?

1: In many other countries, VFR flight is not permitted at night, and the issue therefore does not arise.

2: Unless you're low enough for your aircraft's lights to illuminate the ground, in which case you're already way in deep shit anyways.

Interesting question. In the United States, VMC just stands for Visual Meteorological Conditions, meaning that these weather conditions permit flight by Visual Flight Rules. IMC or Instrument Meteorological Conditions are meteorological conditions where flight operations must be performed by sole reference to flight instruments. Note the terminology: METEOROLOGICAL CONDITIONS are only in reference to weather. It does NOT make a distinction between day and night operations. Instrument Flight Rules do not make a distinction on this point, either.

You are quite right to think that dark night over featureless, uninhabited terrain or over water is instrument flying; but is is still considered flight under VMC. While you can LEGALLY conduct a flight over these areas at night under VFR, as a CFII, I will advise you that this is not a reasonable way to operate an aircraft and possibly very unsafe too. John F Kennedy Jr was killed doing this near Martha's Vineyard in July 1999. I also recommend that non-instrument rated pilots not attempt to fly VFR in these conditions. For instrument rated pilots, I strongly recommend filing IFR during cross country night flights.

The short answer is no, the definition of night VMC does not specifically require any defined degree of ground illumination to be present. (at least in the US)

You raise some excellent concerns in your question, demonstrating a solid understanding of the principles of Operational Risk Management: Identify the hazards, assess the risk, make decisions, implement controls, and monitor.

Following these steps prior to, and during night flight is crucial to safety for the reasons you describe. As long as visibility is relatively clear and there is enough ground lighting to form a discernable horizon, flying on even the darkest nights can be done safely, and can actually be fun. It is easier to pick out other aircraft visually, and roads and cities really highlight themselves. In areas where illumination is sparse, situational awareness of your position and the highest terrain in your sector is crucial.

It is rare for anybody to truly need to fly VFR at night, so if weather, visibility, ground lighting, or any other conditions are concerning to you, either don’t fly, or file IFR if you are so rated.

It's very much worth noting the level of sensitivity of the human eye.

This sensitivity, in a healthy, well nourished individual who is not hypoxic, is such that it is impossible to become fully dark-adapted outdoors on a clear, moonless night, because starlight is too bright.

From my own experience at star parties, I can attest that as long as participants are careful about use of artificial light, after less than an hour in the dark it becomes possible to walk around without colliding with people or objects, identify objects visually, and so forth. In a photographic darkroom, I've noted that light from a luminous clock dial, reflected from a light colored wall, becomes sufficient to locate developing trays visually, despite being much too dim to fog film with reasonable exposure times.

If the instrument lights can be sufficiently dimmed and the eyes adapted before leaving the region with ground lights, a pilot flying well below oxygen required altitude (or using oxygen correctly) ought to be able to see the ground well enough to avoid problems, although starlight will tend to be very "flat" -- coming as it does from the entire sky, the will be no real shadows to highlight terrain features and potential obstacles. The limiting factor here might well be the airplane's own navigation and clearance lights -- which, for obvious reasons, can't be dimmed or shut off while in flight.

"does the definition of night VMC (in the US or any other jurisdiction) require that the terrain in the area be lighted sufficiently for it to be visible?"

In the US, the answer is no. It is certainly possible, but can be mentally challenging.

When I did my night training for my private pilot license, we flew southeast to overfly Martha's Vineyard, then east to land at Nantucket; see the picture. (We actually did some takeoff and landings at Minuteman, 6B6, to start the flight as 9B1 didn't have lights). Martha's Vineyard is not too many miles off the coast, and on a clear night there are plenty of lights in the surrounding area to pick out as ground references on the way there. Once we turned away from MVY tho, I remember the loss of horizon vividly after a few minutes - I recall the plane, my Cessna 150, 100 HP, 2 seater, with just enough instruments to be legal for IFR, no autopilot, picking up speed, by the sound of the wind picking up, and realized I was not straight & level anymore. My instructor was saying "trust your instruments, trust your instruments", and I used them to level off and stop the descending turn I had gotten myself into. Then following them until the we could pick up the lights at Nantucket. Coming back was similar, climbing up into the darkness, following the instruments for several miles until lights became visible again.

It's harder than you think, and even now, 20+ years later, I find myself pretty drained after an IFR flight, even a training/practice flight "under the hood", because it is a lot of mental work. Single pilot IFR is said to be one of the toughest flying tasks there is. Admittedly it gets easier with moving map GPS and autopilot, but you have to practice without those too in case something happens and you're stuck on just the older technology, or even less. 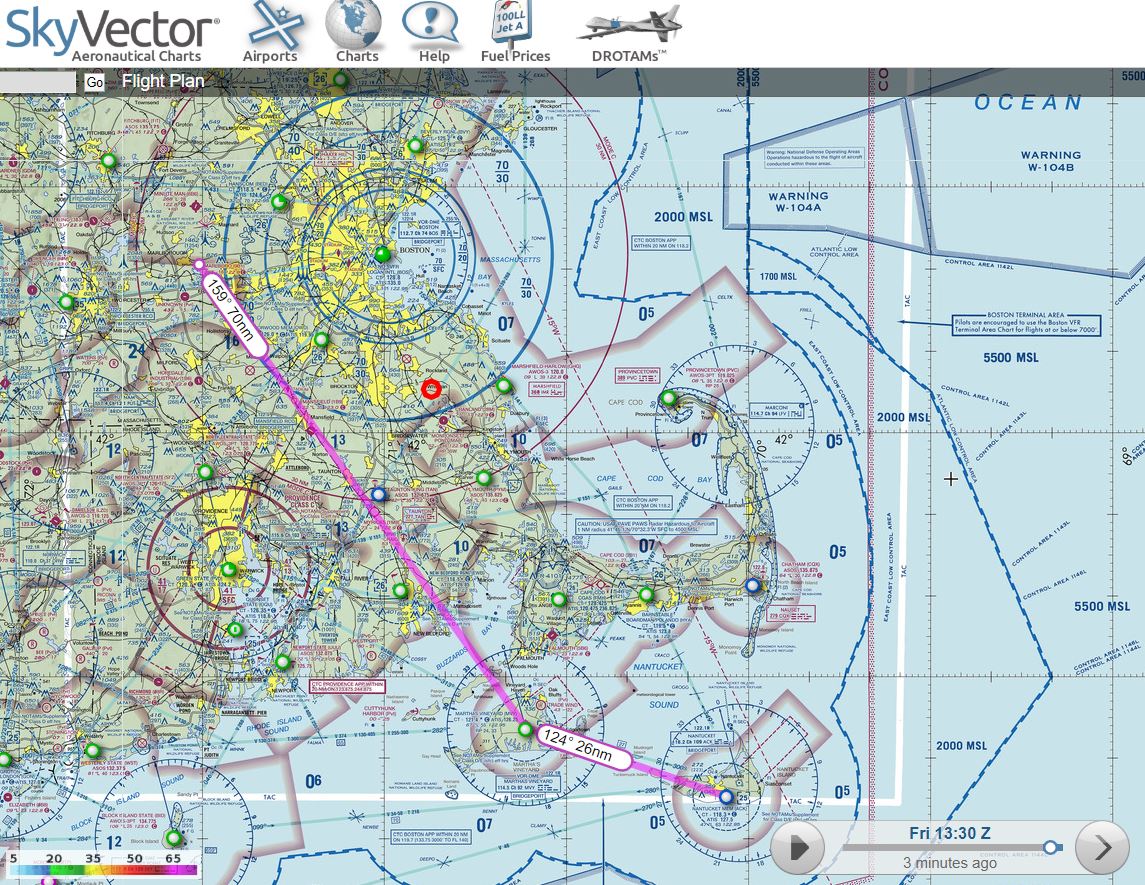 At least in the US, no, the terrain doesn't need to be visible for night VFR flight to be legal. However, what is legal and what is safe are often quite different.

Even in rather sparesely populated areas, there will usually be some amount of lighting on the ground, e.g. farm houses, cars, towns, etc. And once your eyes adjust to the dark, the moon may illuminate the ground between enough to see it. If the sky is mostly clear, you may be able to see a horizon where the stars stop.

On a cloudy night over completely barren land (or open water), it's all just black in every direction, so one must fly solely by reference to instruments. You can actually log this as "actual instrument" time even when flying VFR, which should be a clue that doing so is probably a very bad idea for someone without an instrument rating.

Actually, the thing about VMC vs. IMC is not primarily so much to do with whether you can see the ground below or around you (you can be VFR-on-top and see nothing but clouds underneath you, you're still considered to be VMC), but rather how you go about avoiding other traffic.

In VMC, the primary traffic avoidance/deconfliction method is "see-and-avoid", and crews performing VFR operations are expected to handle that burden individually with no or minimal assistance. In IMC, traffic avoidance/deconfliction is more of a team effort (though the individual crews are still held primarily responsible for their own aircraft) between all participants by following specific procedures, regulations, ATC and TCAS instructions, and so on.

That's what makes night VFR over featureless and unlit terrain an even more dangerous proposition than regular night flying; you'll need to spend a lot of time heads-down looking at instruments, but you'll still be expected to handle traffic deconfliction on your own.

Not the answer you're looking for? Browse other questions tagged regulations night-flying vmc or ask your own question.

14
Why don't light-up runway numbers similar to runway lights?
18
Is the pilot required to keep visual lookout during IFR operations in VMC?
8
How do the FAR's define a cloud?
1
Are there any non-bureaucratic hurdles preventing more widespread adoption of synthetic vision?
2
Is it possible to fly VFR above the IMC floor or VFR-On-Top without a specifically filed route, both using an IFR flight plan to go through IMC?
2
Can US pilots fly VFR OTT and/or VFR at night in Canada without additional ratings?
2
How do pilots avoid clouds under night VFR?
5
Does pilot-controlled lighting work if you are interrupted by another voice transmission?
13
What is the best procedure for landing at my destination if I have a full electrical failure at night?