From what it appears to me, flight control surfaces seem to be taken for granted. In terms of how they actually work and what kind of physical outputs they give in terms of forces and such.

Take for example the elevators of a Boeing 777, if the pilot wanted to pitch up, the elevators would move up. What are the physics behind this? Is it air being deflected thus a change in momentum occurring to pivot the aircraft's tail down or is the angle of attack changing due to the moving nature of the trailing edge? or both?

I am quite interested to know because I want to simulate Aerodynamical forces in a game I plan to make soon. Diagrams would also be useful but not required. Thanks in advance.

Thankfully, aerodynamics in the usual flight range is linear.

Another parameter which influences lift is the camber of the flight surface. Positive camber produces more lift at the same angle of attack. Deflecting a flap changes this camber, and its effect can be linearly added to that of the angle of attack.

Is it air being deflected thus a change in momentum occurring to pivot the aircraft's tail down?

Yes, when a flap moves, the angle of attack stays constant but the camber of the flight surface changes, thus producing a change in lift. In your example, a trailing-edge up deflection decreases camber, the surface produces less or negative lift which produces a moment around the center of gravity.

And yes, lift is produced by deflecting a stream of air.

Things get more complicated and interesting when the aircraft leaves the angle of attack range in which aerodynamics is linear.

A trailing-edge control surface, when it deflects, changes the camber of the overall airfoil. More camber means more lift, in whatever direction that airfoil is mounted.

Philosophically, "why" it does this is just, well, that's how air behaves when you push it past something with that shape.

Lift can be described as a moving wing colliding with air molecules at an angle, the result of the collision is the wing moves one way and the air mass the other, as per momentum physics.

Moving the trailing edge, or the entire surface, increases the angle of attack, resulting in more lift at a given speed $V$:

Deflection of the control surface produces a linear response to lift, as Peter Kampf says. A graph of angle of attack vs lift coefficient generally shows a linear relationship through most of the unstalled AOA range.

Further inspection of the effect on AOA, of deflecting a trailing edge flap down, as compared with "drooping" a leading edge, does indeed show doing this changes the angle of attack of the lifting surface!

Flaps are usually near the wing roots, and leading edge slats near the wing tips, for this reason. We want the root to stall first.

The importance of this concept is highlighted in a slow flight coordinated turn. Use of ailerons without coordinating rudder may result in a sharp roll in the opposite direction of the intended roll, because the AOA of the "down" aileron wing now exceeds its stall AOA.

From an old uni book on stability & control of aeroplanes, showing the pressure distribution over the horizontal tail: 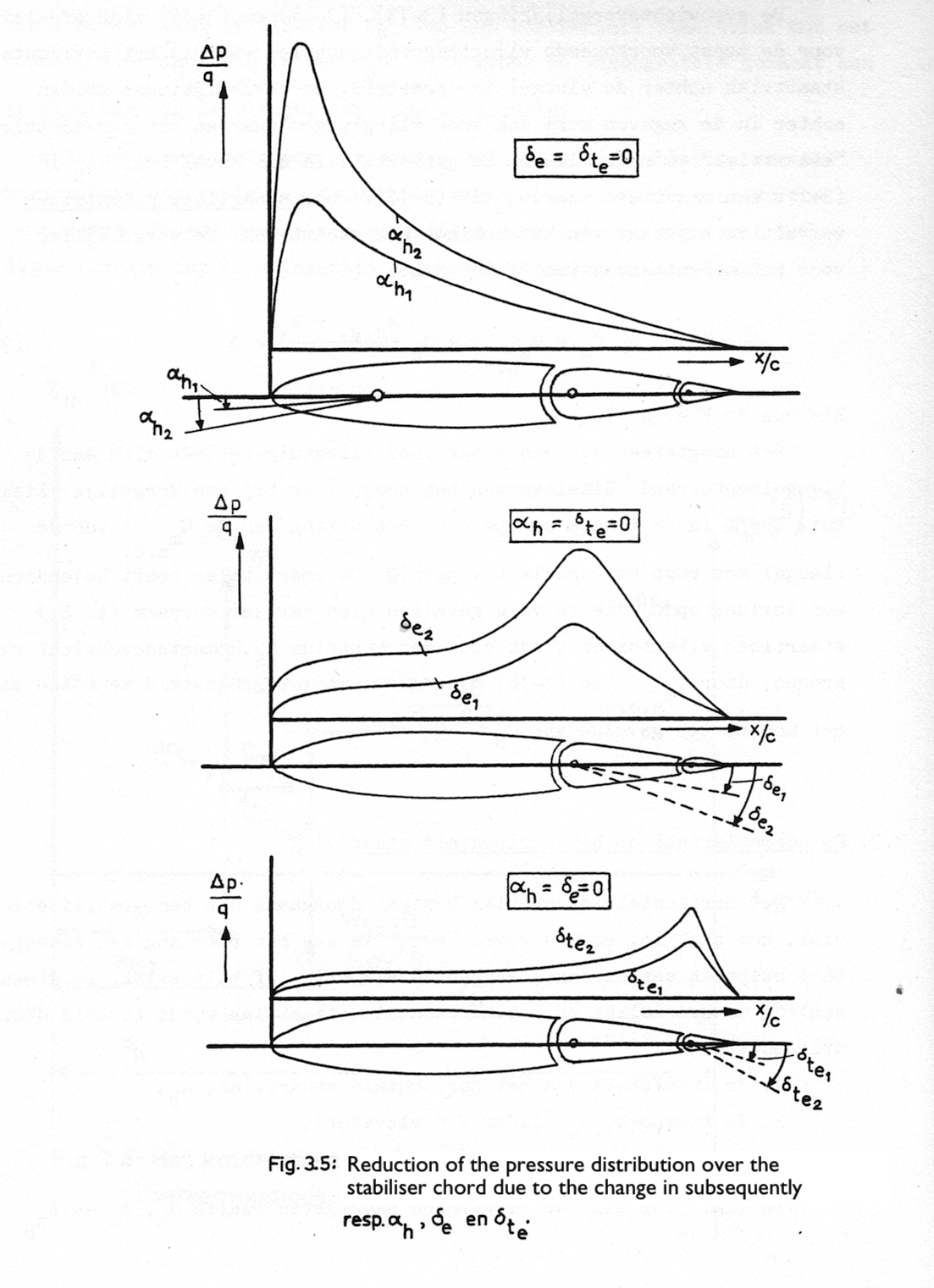 Not the answer you're looking for? Browse other questions tagged aerodynamics flight-controls lift aircraft-physics control-surfaces or ask your own question.

47
How complete is our understanding of lift?
12
How does flight control surface authority change with AOA?
5
What's the theoretical background of the critical angle of attack?