The common battery voltage on aircraft is commonly referred to as "28 volts". What does that really mean in terms of a lead-acid battery?

I hope this isn't overloading this question too much, but when nickel-cadmium packs are used, does that have 20 cells, or 19 or some other number?

It's the second option. In any other context, a small aircraft's electrical system would be called "24V". But the alternator regularly puts out 28V, so that's what's typically expected if you hook up your multimeter while the engine's running. Of course, the on-board equipment can operate over a wide range of voltages, often down to as little as 20V.

Multiple sources indicate that the 28 VDC bus on aircraft powered by 24 VDC batteries, and the 24 VDC systems on truck powered by 28 VDC alternators, are basically the same thing, and that is is just a naming convention.

The number of cells is a function of the nominal voltage and the cell type. From this site:

For instance, from this site on the B737:

The 28 VDC bus on aeroplanes is normally powered by a Transformer Rectifier Unit (TRU), which is powered by the 115 VAC bus. Power is transformed first from 115 VAC to 28 VAC, then rectified from 28 VAC to 28 VDC. The charging voltage must always be higher than the nominal battery voltage.

From the same B737 site, indicating that the average voltage is more in the order of 27 VDC:

The purists may like to know that the DC voltages are measured at the following points:

Let me start of with two facts that pretty much answer your question:

To put a bit more meat on, here is a typical discharge graph for different types of 48V batteries (I could not find one for 24V, but divide the y-axis voltages by 2 and it will be pretty spot on): 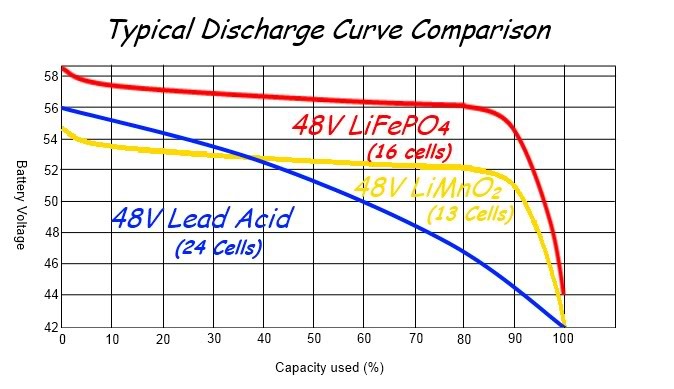 So, you design your circuit so that it can stay alive on the minimum-rated voltage from your battery (24V, in your case), but also so that it can handle the voltage that the alternator has to put out to keep the battery charged (for a 24V battery: roughly 28V), which is what it will be at most of the time.

Btw, to directly answer your question:

So, when aircraft power is specced at 28 volts do they actually mean a 12-cell battery with a "float" voltage around 28V, (built out of two common-as-dirt "12V to everyone else") batteries?

But in reality, the fully charged/charging/float voltage of the system with alternator running is higher

Yes. If a car battery states 12V that's kind-of the lower limit. As in, it really shouldn't drop below 11.8 when fully discharged, although depending on the type of battery and vehicle it may still function (for some values of function). A fully charged lead-acid battery goes 10-20% above what's on the label (in case of 12V accu, up to 14.4V is not uncommon).

While the battery is being charged, the voltage is going to be even higher. An alternator for a 12V system will probably output 14.5V. External chargers can go above that. After all, charging tends to go faster if there's a higher-than-target voltage connected. I've seen 12V chargers charging at 15V, but that's probably not very good for the lifespan for the battery involved.

When a voltage is specified on a battery, consider that voltage to be what's left when the battery is almost drained. So everything connected to it should be able to handle voltages that are higher or switched-off during charging (the latter is uncommon in my experience).

This is all assuming lead-acid batteries. Newer batteries are trickier.

Not the answer you're looking for? Browse other questions tagged electrical-system battery or ask your own question.

8
Were cabin lights really consuming that much power back in 2006?
7
What does BUS mean in the startup procedure?
3
How does the Piper Archer III electrical system work?
6
How does an aircraft recharge its batteries?
1
Am I correct about what AC/DC BAT BUS does?
8
What is the typical voltage used on jet airliners?
2
What does Phase 3A mean for avionics?
6
What is the battery voltage for a Supermarine Spitfire?
2
What is the difference between an aircraft main battery and standby battery?