Could Henri Farman have steered his plane with ailerons on January 13, 1908?

It is known that Henri Farman flew (over) 1 km in a circuit on January 13, 1908, and gained a 50000-franc prize. Orville Wright even witnessed Farman on November 18, 1907, attempting to make the full circle but each time touching the ground before completing the required course. The altitude of the machine dropped while the French pilot attempted some turns. (Farman did not use ailerons till after September 1908.)

The question is: Would the ailerons have made the Farman plane to steer more efficiently without losing altitude, which was critical because, for technical reasons, the plane could not fly higher that what you can see in the picture? 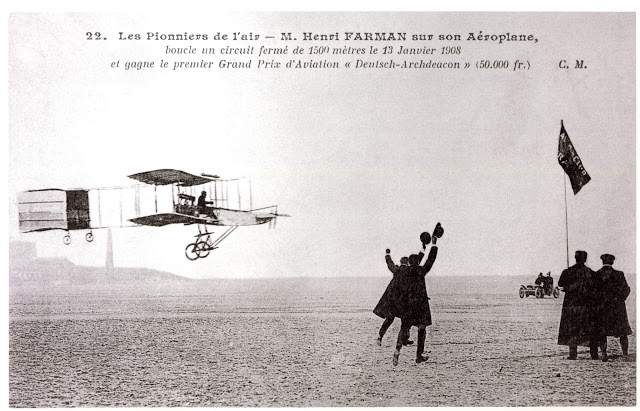 Henry Farman flying on January 13, 1908. The picture appeared in many French publications of the time.

The image below apparently shows that a plane loses altitude while taking turns using its ailerons. Does the airplane also go down if it is steered just with the tail?

I would first check to see if the car in the background was actually pulling him along in 1908, or maybe the aircraft engine was a bit better.

Banking does indeed reduce lift, but not as much as we may think:

If vertical lift at 0 degrees bank was 1000 lbs, a 20 degree bank at the same AOA and speed still produces: $$cosine 20 degrees × 1000 = 940 lbs$$ of vertical lift, easily corrected by slightly increasing the Angle of Attack of the wing.

The reason the plane previously could not make the turn can be explained by the relationship of thrust and drag. Turning increases drag, which will slow the plane down. These early aircraft were very draggy and underpowered, barely getting off the ground.

Deflecting the ailerons (really 2 halves of a speed brake) increases drag. The bank additionally decreases lift. With no reserve power to add, the plane goes down. What an accomplishment the first circle must have been at that time!

But "skidding" the plane around the circle, with rudder only, presents the whole side of the plane as a dragging surface, there for is not a better solution. The "coordinated turn" using both rudder and ailerons produces the least amount of drag, and remains the recommended aircraft turning method to this day.

But even the best method of turning requires more power (thrust) than straight and level flight. A few more horse power, and/or a lower drag design wins the prize.

Reducing weight and a better prop design would also be helpful.

Yes ailerons would help turn more efficiently, although likely not enough to help with an airplane with such marginal power it can't get out of ground effect.

To the extent that it does bank, an airplane loses altitude because of the bank, and it doesn't matter how the bank was induced. When it banks the lift vector tilted means the vertical vector is reduced and a lateral vector is introduced, the lateral vector being the turn (you're moving sideways and forward, in an arc). The keep from descending the total lift has to be increased by pitching up, so an elevator input is required to keep the nose from dropping. The process requires more power, so if power is that marginal, even a nice banked turn induced by proper aileron controls will cause a speed reduction as nose up input is added and it may start to settle toward the ground until you stop turning.

That being said, controlling turns by skidding, basically angling the engine thrust vector to the side to impart a lateral thrust component and around you go, more or less, is way more draggy although it can be done. A skidding turn with wings level doesn't need as much elevator input but the drag of the skid is much worse and you will still slow down and without a power reserve will have to descend if already at a minimum speed.

Another factor is you may get some roll rate due to the skid itself to induce some bank into the turn. Depending on how strong the Farman's dihedral effect was, the skid may have induced a bit of roll as well to create a turn that was a combination of skidding and banking, (a bit like a car drifting while on a banked track turn). This is massively inefficient and would make the problem of holding altitude with marginal power even worse.

Then, on top of that, controlling with rudder alone with only a bit of dihedral, there would be a substantial lag between the skid input and any rolling input, requiring a lot of lead-in with the rudder input. If you just try to turn by skidding, well you can make it around that way, but the roll becomes a problem because without ailerons you now have to skid the OPPOSITE way to return to level flight.

If you've ever tried to control and airplane with rudder and elevator alone, you discover this pretty quickly, unless the roll induced by yaw is very strong and immediate. You skid, get some heading change and some roll, but to control the roll and keep from over-banking you have to skid the other way. It's extremely difficult to control an airplane like this without very large amounts of dihedral (2 axis ultralights like the Quicksilver MX used large amounts of dihedral for this purpose, to be controllable with rudder and elevator alone; it was still an inefficient way to turn, but the thing is so draggy even flying straight it doesn't make that much difference).

In the case of the Farnham, there isn't a lot of dihedral so he would make a rudder input, skid sideways, getting some heading change, and, as there is some dihedral, there would likely be a gentle roll into the skid. The drag alone from this slithering sideways would make the machine descend and require a pitch input. But the delay between rudder input and a banking result would be several seconds and the thing would be a massive handful to fly, like trying to drive a car around a slalom course on a slick ice surface.

As I mentioned in my earlier answer, the Flyer was a handful to fly for other reasons, mainly neutral stability, but compared to its contemporaries it was incredibly controllable. You would have to master the instability to train your eye/brain/muscle loop, but it was doable and once you mastered it (like a helicopter, also dynamically unstable but extremely maneuverable), you had yourself a very maneuverable machine. The Farnham would have struggled around barely on the edge of control, a crash waiting to happen, although ailerons or wing warping would have helped a lot.

Yes, it is generally more efficient to enter a turn by using ailerons and rudder together than by using rudder alone, even if the poor performance of the aircraft requires the bank angle to be kept rather shallow in order to maintain altitude.

Not the answer you're looking for? Browse other questions tagged flight-controls aviation-history or ask your own question.

10
How far could the Wright brother's catapult have thrown their unpowered plane?
8
Do aircraft using only spoilerons for roll control, with no conventional ailerons, have a crossover airspeed?
13
How is a plane with only ailerons and jet (no props) controlled?
2
Is there any clear picture or drawing, of a Wright brothers' plane, published before August 12, 1908?