How did the Brazilian Civil Aviation Authority have MCAS on paper from Jan 2018? 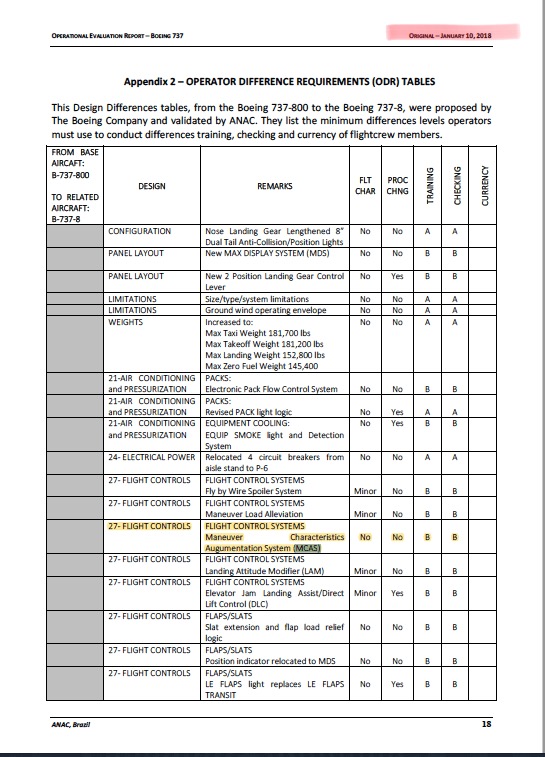 how could they know but nobody else did? Did they buy the extra sensor or something?

Of course the airlines knew about MCAS. Do you think the maintenance manuals, maintenance program documents, tech training, wiring diagrams, and all that stuff was left out so it was totally top secret? There would be a controller, wiring and software on board even though there were no cockpit indications or controls, so certainly the techs who might have to troubleshoot it, and others on the tech/engineering side, would know.

All that happened was MCAS was excluded from differences training, as that document shows, so that it was not included in the ground school differences course pilots took when moving from one 737 model to another (avoiding sim time, which was the point).

So pilots never got a formal briefing on its existence, and it could just be considered part of the "PFM" of the various black box systems who's level of function is too in-depth to be included in pilot training (PFM means "Pure F-ing Magic" and is a term instructors use to describe black box function that is beyond the training because covering it would extend the course to months).

I have little doubt there were pilots, those who dig into the aircraft more deeply than most and might even peruse maintenance manual descriptions, who would have known of the system, but just not on an official level, with official procedures and protocols that affected the flight crew.

Sort of like the subsystem that applies the brakes after you lift off to spin the wheels down right away. It just does its thing in the background, and pilots may or may not be aware of it, but everybody on the technical side does.

Not the answer you're looking for? Browse other questions tagged aircraft-design commercial-aviation flight-controls flight-training or ask your own question.

5
What protection did the Concorde have against an uncontrolled decompression?
5
What is the purpose of these labels on an aircraft's wings?
16
How able were pilots of three-person cockpits at running the normal FE work?
8
How did Northrop Grumman propose to make the Global Hawk nuclear powered?
2
How did the controls work for variable-pitch props?
8
For the 737 Combi, How did changing the proportions of the passenger vs cargo areas work?
9
Did the Douglas SBD Dauntless have a second set of controls?