Is an ekranoplan less efficient than a regular plane? [closed]

This are my conclusions upon researching the matter:

Ground effect is the cushion of air that can not escape down because of the ground. The hovercraft creates that cushion using a skirt which prevents as mush as possible a lateral escape of the air from underneath the ship. In effect a pressure differential between underneath and over the ship is created, enough to counter the ship weight. The value of this overpressure is within millibars.

Now returning to ekranoplan. While in the water, the ship has to fight the water drag. If the wings provided just enough lift to defeat the water drag, and the air cushion former under is rendered slow enough at escaping, then the ship becomes airborne. Will ride on a dynamically forming air cushion, better known as ground effect. However, the air drag becomes now the main opposing force. Increasing the angle of attack will increase the air drag and thicken the air cushion to the point where the ground effect is lost and the aircraft will loose altitude down to ground effect. Since the power output is limited, the machine is restrained at flying in ground effect only.

Now in terms of efficiency, the answer is no. The ekranoplan uses more thrust to fly in ground effect because it has to overcome air drag which is significantly stronger due to high angle of attack required to maintain the ground effect. The main reason the airplanes are efficient is due to low drag cruising. The wing develops enough lift to maintain the aircraft in the air while the angle of attack makes the wing a blade cutting through the air. Since the ekranoplan rides at way lower speeds than a regular airliner, it is required a high angle of attack which in turn determines a high drag.

There are a couple of inaccurate trains of thought in the question.

The ekranoplan uses more thrust to fly in ground effect because it has to overcome air drag which is significantly stronger due to high angle of attack required to maintain the ground effect.

...thicken the air cushion to the point where the ground effect is lost and the aircraft will loose altitude down to ground effect.

Thickening an air cushion cannot result in losing ground effect. The ekranoplane cannot fly out of ground effect - increasing Angle of Attack does not make much sense and altitude will auto stabilise to within ground effect, indeed at higher thrust level at higher AoA for a given speed. I believe this is what OP means, but it does not equate to ekranoplanes being less efficient than conventional aeroplanes. Ground effect creates extra lift without a drag penalty.

Whether ekranoplanes are more or less fuel efficient than standard aeroplanes is not due to the ground effect, but to the interference with the water surface, sea state, having to lift the engine out of the spray etc. Depending on the speed, they may be less efficient than ships, but the payload arrives a lot quicker.

We can see the increased efficiency of the design in this photo of the Orlyonok: 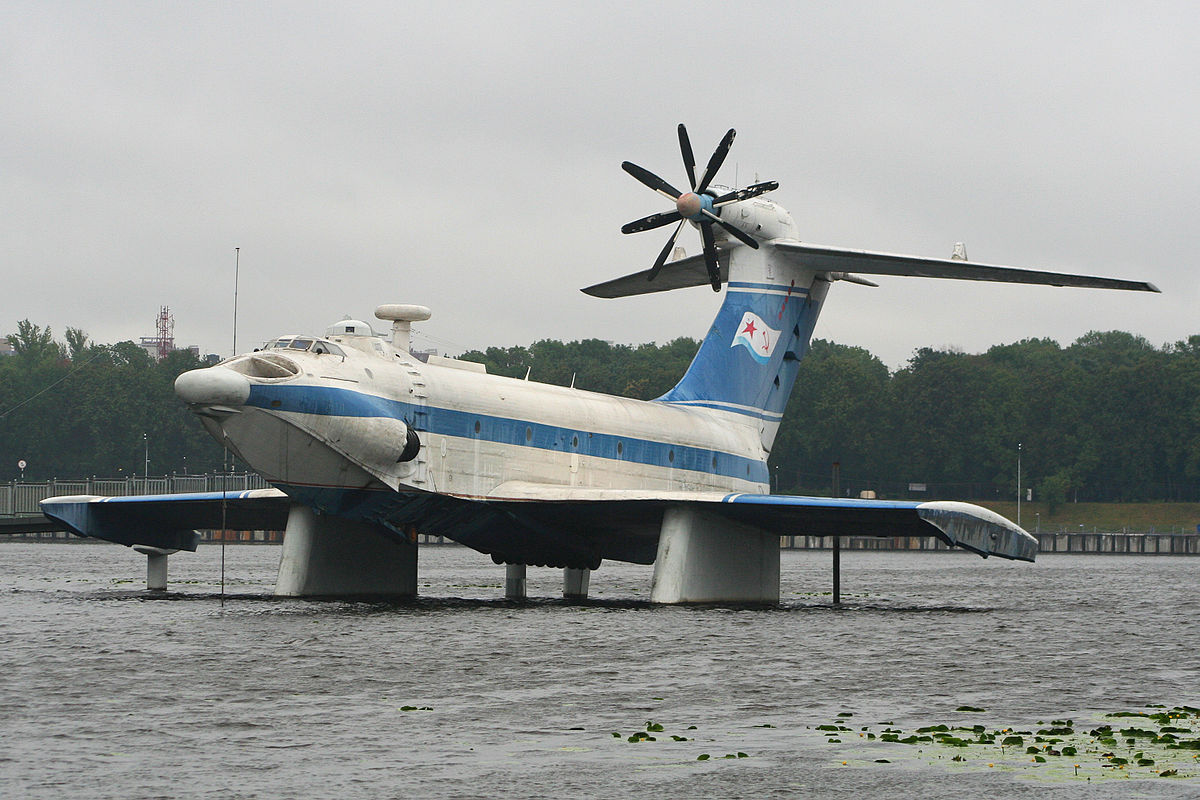 This is an aircraft roughly the size and carrying capacity of a midsize transport like a C130, yet its wings are much shorter, and it is propelled in flight by a single turbofan. Granted, probably more powerful than the C130's engines (looks similar to, and possibly the same unit used on the TU95), but one engine as compared to four.

This doesn't quantify the relative efficiency exactly, but the benefits are clearly visible.

However, ekranoplans require a flat surface to operate, so they are restricted to over water flight. What makes the ekranoplan impractical for general ocean use is the sea state requirement: no more than 3 foot swells. Higher than that, ground effects and lift are disturbed, and a wave striking the hull would stall the aircraft and result in a crash - just too low to recover from a stall. An ekranoplan, operating on the open ocean, would be in serious trouble if the sea state worsens while it is in flight, as sea states have been known to do. Even in calmer seas, one rogue wave could crash an ekranoplan.

In that respect, the ekranoplan is less efficient than a conventional aircraft, for the narrow range of weather conditions that it can operate. Much of the efficiency of modern transport aircraft is reliability of delivery: their ability to operate in almost any weather condition.

This was a primary reason the Soviet Navy lost interest in the ekranoplan technology: it's likely NATO opponents would not restrict operations to locales and weather conditions where an ekranoplan could reliably operate.

Note that Russia has shown some interest in reviving the design recently for commercial applications, and a few recreational aircraft based on the ekranoplan design have appeared in recent years, for use on lakes.

Not the answer you're looking for? Browse other questions tagged ground-effect ekranoplan or ask your own question.

11
Can ekranoplans (GEV) be more efficient than traditional airliners?

32
Why don't helicopters always takeoff from a hover out of ground-effect?
31
Why the ground effect has such a different outcome for wings and cars?
5
Can we borrow Formula One's ground effect for airplanes?
6
Why did America not build its own ekranoplan?
8
Why is ground effect greater over smooth hard surfaces?
11
Can ekranoplans (GEV) be more efficient than traditional airliners?
0
Could an airliner be as efficient lower and slower?
2
Why do the two different “ground effect”s used by aircraft and automobiles do opposite things in almost the same conditions?
1
What about a Plane-Train?
4
Is there ground effect flying below an infinite 2D plane as opposed to above one?