What is the minimum speed a glider can thermal at?

What is the minimum speed a glider can thermal (climb)at, typically, in terms of Vs over a dark field on a warm summer day?

The answer depends on several factors:

Below please see a graph for resulting climb speed for different bank angles and a cosine-shaped thermal of 215 m diameter. This is not to suggest that thermals will always have this climb speed distribution over their radius, but it is easy to model mathematically. Outside of the thermal's radius the vertical air speed drops to negative values (the rising air needs to be replaced somehow, after all) 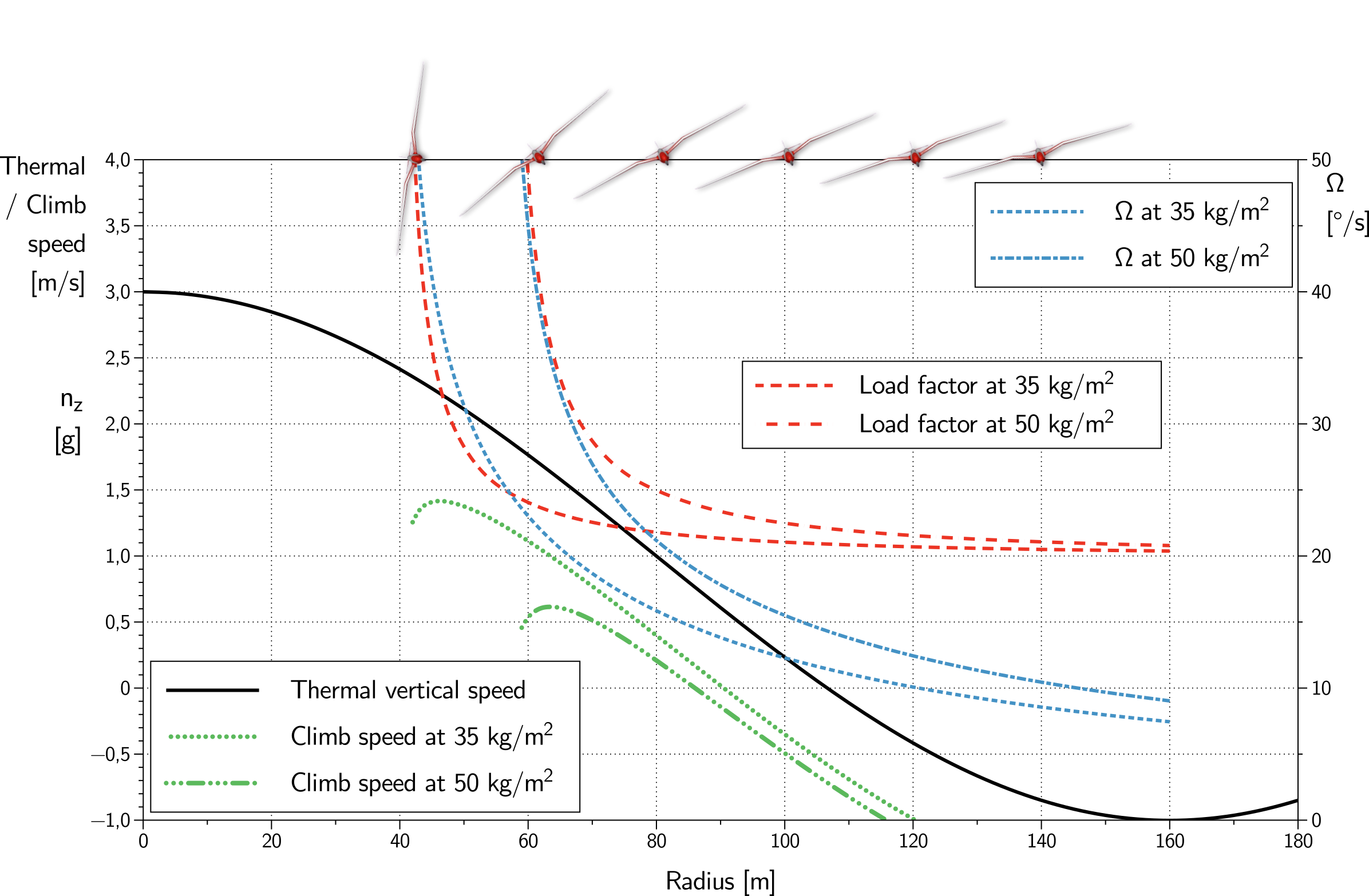 The solid black line shows the vertical air speed over the radius of the thermal. The red lines are the load factor with and without water ballast and the blue lines show the angular velocity of the circling motion ($\Omega$, right Y axis). The green lines show the resulting climb speed for both wing loadings. The little DFS Habicht gliders on top illustrate the bank angle for the low wing loading.

The flight speeds at the different radii are:

I do a lot of soaring and you thermal at min sink +/-, which is normally just few knots above stall, around 1.1 Vs. The slower you can go the better (smaller circle) and sometimes going below min sink is worthwhile if it lets you core the thermal better, but your ability to do this can be limited by the glider's particular stall characteristics and your own flying skills.

On gliders with docile stall behaviour you can pretty much circle on the edge of the stall buffet. A glider that breaks sharply with not a lot of warning, and wants to roll off, you need to leave more margin lest you enter a spin while above someone else and you might thermal at min sink or a little above.

The Schweizer 1-26 has very docile stall behaviour with a very strong pre-stall buffet that starts well before the stall break, and you can thermal a 1-26 right in the buffet range, shuddering and shaking as you go around.

BTW the best thermals come from lighter brown fields, that are dry. Moisture in the ground makes it store heat and this tends to move the thermal activity to later in the day, and makes it milder. Spring time after a very dry winter with little residual snow cover to moisten the earth when it melts will yield boomer conditions on good soaring days.

Thermal flight is generally done at a speed close to minimum sink (which is usually slower than maximum L/D). This is found by experiment with any given sailplane design, and depends on many factors such as specific airfoil, aspect ratio, spiral stability, and weight (the heavier, the faster you have to fly for minimum sink).

Minimum sink can be roughly calculated from airfoil data, which give lift and induced drag produced for a given speed and angle of attack, but there are so many other variables in the design of a complete airframe that it normally has to be established by testing on the prototype (or the actual article, in the case of a non-production aircraft). It's typically, however, a small factor above stall, rather than, say, at much higher speed.

The usual sequence of thermal cross country flying is climb in a tight circle within a thermal at minimum sink speed, then when the thermal tops out or, in the absence of pilot oxygen, oxygen altitude is reached, break out and fly toward the next thermal/thermal group/"avenue" toward the destination at "speed to fly" -- which is maximum L/D plus half the reported wind speed.

Rinse and repeat until destination is within a straight glide.

This technique may be modified in ways intended to save time when flying timed or competitive tasks.

5
What is the minimum speed for a scale-model of a modern commercial aircraft to fly?
6
Does the expression "stall speed" have a definition?
5
Can a light glider without thermal protection land from the orbit, starting from the orbital speed?
21
How can we calculate the benefit gained from taping glider wing roots?
7
In a jet, are Vy and Vx achieved at a constant AOA at all altitudes?
0
How to calculate minimum flying speed in distributed propulsion?
3
What would be the minimum number of engines required to climb in a 747?
0
What is the minimum glide ratio of a motorized glider?
2
Do motor glider pilots ever "cheat" and use their motors to thermal?