Was the Coanda effect known in 1868 to Matthew Piers Watt Boulton (the one who described the first ailerons)?

Matthew Piers Watt Boulton is known as the inventor whose 1868 British patent No. 392 nullified any claim of the Wright brothers that they discovered the ailerons (see FIG. 5-7). It seems now that another invention in the same patent (see FIG. 1) shows an engine similar to one that uses the Coanda effect (see the picture: "Diagram of a generic engine that harnesses the Coandă Effect to generate lift (or forward motion if tilted 90° on its side)" for comparison).

The question is: Did Boulton have really in mind the Coanda effect when he proposed the engine in FIG. 1?

This is the explanation Boulton gave to FIG. 1:

"A body is provided having the form of a solid of revolution tapered at the stern and prow on front. An annular jet of aeriform fluid is caused to issue at its fore part in front of its convexity so as to mix with air and create a mixed stream which flows or sweeps over the convex surface, finally quitting it backwards. In this case the action of the jet causes reduction of pressure on the front and thus produces propulsive effect."

"Figure 1 is a longitudinal section of a body or vessel constructed according to my Invention, propelled by an annular jet issuing at its front. a is the body or vessel containing fluid under pressure and shaped so as to offer little resistance to longitudinal movement in the direction of the arrow e; b is a tapering front or prow connected to a by thin ribs; and c is a cavity so formed with an opening round its periphery that an annular jet of fluid can issue by it perpendicularly to the longitudinal axis of a or nearly so. When the jet so issues it tends to reduce pressure on all sides. By virtue of this reduction of pressure the air (or other medium in which the body is placed) in front being free to move flows backwards towards the jet and mingles with it, while the body a being also free to move, moves forwards in the direction of the arrow e. The jet instead of issuing from c perpendicularly to the longitudinal axis of a may be made to issue at any desired angle by suitably forming the passage round the periphery of c." 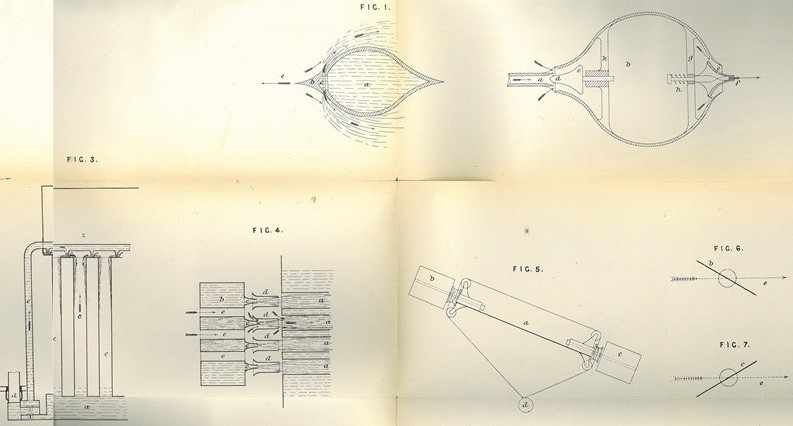 FIG. 1 shows an engine that seems to use the Coanda effect and FIG. 5-7 a wing with ailerons (driven by a pendulum but the patent specifies they can also be controlled by hand). The entire patent of Boulton can be consulted HERE 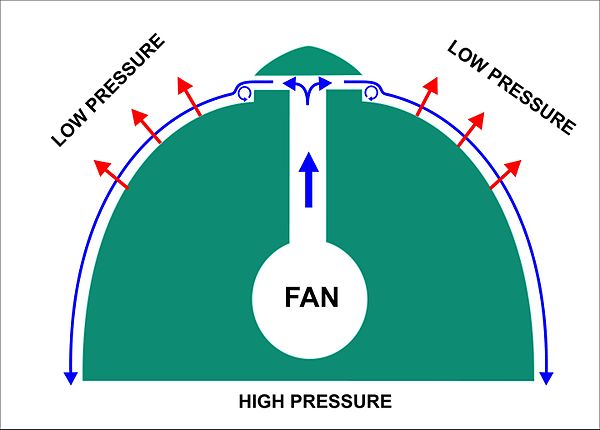 A diagram of a generic engine that harnesses the Coandă Effect to generate lift (or forward motion if tilted 90° on its side).

The accompanying text clearly describes an application of the Bernoulli effect. However the resultant backwards airflow shown in the drawing is given no explanation, other than that implied by the fact that the device is drawn forwards. So there is no evidence of the Coanda effect, in which the airstream clings to the device skin, being understood. Would it have worked? Probably, but it would have been pretty inefficient.

Not the answer you're looking for? Browse other questions tagged aviation-history lift or ask your own question.

7
Who was the oldest pilot ever so far?
12
What was the first plane that allowed walking during flight?
10
Who invented the cabin chime? What aircraft was the first to use it?
5
What was the first supersonic wind tunnel?
11
Who was the first black person (in the world) to go airborne in an aircraft?
6
Who first coined the phrase “aviate, navigate, communicate”?
8
Which was the first pressurized aircraft?
2
How does the Coanda effect help some aircraft produce more lift?
1
Did the Wright brothers discover the three-axis control system for airplanes/gliders and the adverse yaw?
3
Who was the air traffic controller voice?