Why are winglets swept back and not front?

A winglet is defined by its airfoil shape, profile, sweep angle and height. In case of the sweep angle, why does it always mean that the winglet is swept back. What is the disadvantage of having a front sweep angle 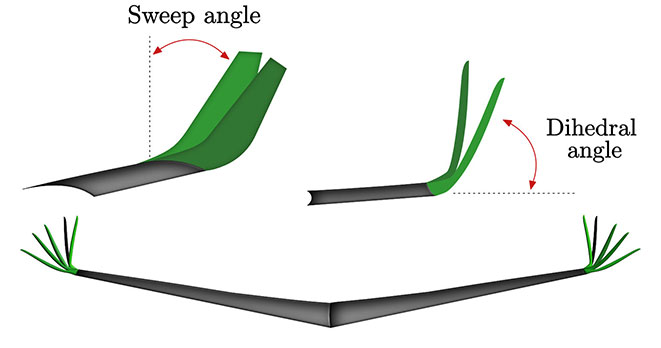 A winglet makes lift like a wing. That's why it's called a wing...let. It's basically a sail (originally they were called "tip sails") designed to exploit the otherwise wasted circulation of air from bottom to top around the tip, placed so that the local flow curling around the tip strikes it at a positive angle of attack. It makes lift/thrust and, being a wing, creates a downwash while doing so, which means some of the circulation is being redirected back the other way (an "outwash" in other words).

So the overall effect is the vortex field is weakened, and some its energy is used to make lift and/or thrust. If the winglet is straight up, its lift component is straight inboard and forward, and is purely thrust and a (wasted) bending moment on the winglet root (which leads to angled winglets).

If it's angled, its lift component is a combination of vertical lift that contributes to holding up the plane, and thrust. So the dihedral angle is a function of how much the designer wanted the winglet's lift force to be extra lift and how much was to be thrust, the resulting angle being a compromise sweet spot between inboard lift and vertical lift in that particular wing's tip flow pattern (nobody seems to use straight up winglets any more).

The sweep angle is for the same reason the main wing is swept, to reduce high Mach# drag (remember it's not just a fin "blocking" airflow; it's a wing making lift like the main wing), and also to place the winglet in the optimal location in the circulation for exploiting the energy in the flow.

Simply because it's easier to pull something bendy than to push it.

The technical term is 'aeroelasticity'.

Not the answer you're looking for? Browse other questions tagged aircraft-design aerodynamics winglets or ask your own question.

5
Why does the spanwise flow along a swept wing not accelerate?
0
Spanwise flow and wingtip vortices in forward-swept wings
13
Why do newer 737s use two different styles of split winglets?
2
Why can’t more older 737s be retrofitted with more newer winglets?
17
Why does the F-15 have a swept-back trailing edge at its wing tips?
2
Swept back wing theory
1
How are foam cores shaped for tapered and swept back wings?
3
Why is sweep angle measured at the 25% chord?