How does increasing the size of a jet engine make it more fuel efficient?

The design trend is there: 8, 4, 3, 2 jet engines on powering the large cargo or passenger aircraft. Is it mostly to accommodate the larger, more efficient fans, or are there also benefits in the combustion cycle?

Jets seem more immune to the issues of excess heat removal that their piston engine predecessors suffered when scaled to greater size. Is there a limit to how large an axial jet engine can be? Are we approaching that limit today with engines such as the GE9X at over $130 \, 000 \, \text{lbs}$ of thrust, or is there more to go?

The efficiency issues are as follows.

For a fixed amount of mass flow rate through a work-extracting thermodynamic process, one large engine is more efficient than two smaller ones because the pair of smaller engines present more interior surface area relative to the mass flow through them than the single larger engine. The more wetted area inside the engine relative to the mass flow, the greater will be the frictional losses. This drives the designer toward fewer and larger engines and away from more numerous and smaller engines.

In addition, there are aerodynamic losses associated with each engine nacelle/pylon assembly on the wing which are minimized by reducing the number of engines installed per wing.

A larger jet engine is more fuel efficient due to there being fewer losses from:

As with every design decision, it's a balance. It only works until a certain limit because of weight gains and duct losses.

Also, it's not just fan size that controls the bypass ratio (BPR) / efficiency:

The bigger the fan, the more powerful the core needs to be, and for efficiency, the smaller the core the better – a big core that reduces the bypass duct size isn't as useful.

The limiting factor has always been the OPR (overall pressure ratio). That requires advances in combustion and materials. Once a higher OPR can be achieved, the BPR can get bigger.

The square-cube law favors large heat engines, because losses are lower the bigger the engine is, since, in general terms, losses are related to surface, and output is related to volume.

Other answers have well explained the real-world implications of engine size and number. Here's a brief take on why an idealized larger-diameter engine (or propeller) is in general more efficient than a smaller one to produce the same thrust. Skip to the end if you're not concerned with the mathematical details. 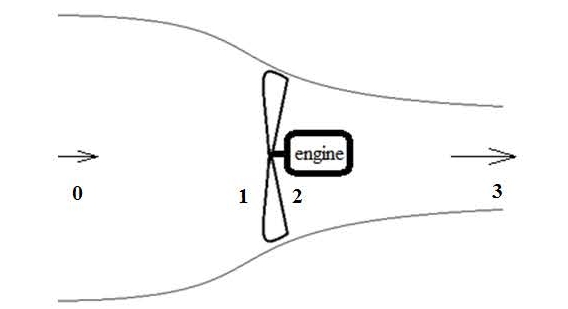 The fan accelerates the flow and the streamtube is narrowed. Depending on the type of engine, this narrowing happens in free air or within a nacelle. Let's say the flow has a velocity $V$ at point $0$ and a velocity $V+v$ at point $3$.

So to drive the efficiency towards its maximum at $1$, we want $v$ to be as small as possible. That is, the most efficient engine imparts the least velocity to the airflow. But remember that the useful thrust is $\dot{m}v$, so if we decrease the imparted velocity but want the same thrust, we must increase the amount of air flowing through the engine. The easiest way to do that is to simply make the fan bigger.

Other people provided very detailed responses that certainly describe many aspects of large engines, but I think the key variable here which have the most impact is the bypass ratio. Turbofan engines generate large proportion of thrust from the air that passes through the fan, but bypasses the engine.

Technological advances in the (core) jet engines probably enabled this trend by increasing the power on the shaft without corresponding increase in weight. The best way to employ this additional power under constraints of passenger travel is to increase mass of air that passes the fan, but not the engine - the bypass ratio.

This cannot be done by increasing the speed of the fan, as you start hitting the material limits on large diameter fan blades. So geared turbofan designs started to appear, which allow large diameter, slowly rotating fan, which provides thrust, and high RPM core, operating at maximum efficiency.

This also has a side effect of reducing noise.

I will attempt to answer your question without any equations.

What defines propulsion force of jet engine? Mass and speed of 'ejected' gasses and also surface the gasses will pushed against (atmosphere), minus air resistance created by engine on intake side (air sucked in but still engine creates some resistance).

Theoretically we can push gasses faster by narrowing gas eject opening, but at some point we will reach critical velocity when gasses will have not enough surface to push against.

Also we can not make intake opening too big -- resistance will start overtake efficiency at some limit value.

Also we should take in account a mass of the jet engine -- more weight means more load on engine/wings and efficiency decreases (more fuel burnt to carry the engine itself).

Force generated by jet engine is proportional to square speed of 'ejected gasses' multiplied by mass of 'gasses' itself [I=V^2*M].

A balance should be achieved to make jet engine efficient.

Two jet engines is less efficient than one due equation S=Pi*R^2 -- surface increases faster with increase of radius.

Two or more engines increase reliability of flying craft -- but at expense of efficiency. Nowadays airplane can land with only one engine, it was put into design of air craft.

Not the answer you're looking for? Browse other questions tagged aircraft-design jet-engine efficiency or ask your own question.

9
Is it currently possible to build a jet engine with 1,050 kN of thrust? (236,049 lbf)
18
What prevents jet engine designs with larger bypass ratios?