I analyzed 2 nearly identical flying wing in XFLR5, how come the one with the thinner tip chord has a higher cD?

I made two flying wings, one with half the wing tip chord as the root chord and one with the root and tip chord being equal.

I then did VLM2 analysis on both at 7 m/s, and used the same airfoil on both. surprisingly, the wing with the thinner wingtip chord had a higher coefficient of drag (which i believe leads to higher drag). How come?

Everything I know leads to less drag, less induced drag because a thinner chord, thinner airfoil due to proportions, and same parasitic drag because everything else is constant. What causes the one with a thinner wingtip to have a higher CD? Does this make sense, or is it just the inaccuracies of trying to calculate CL and CD? 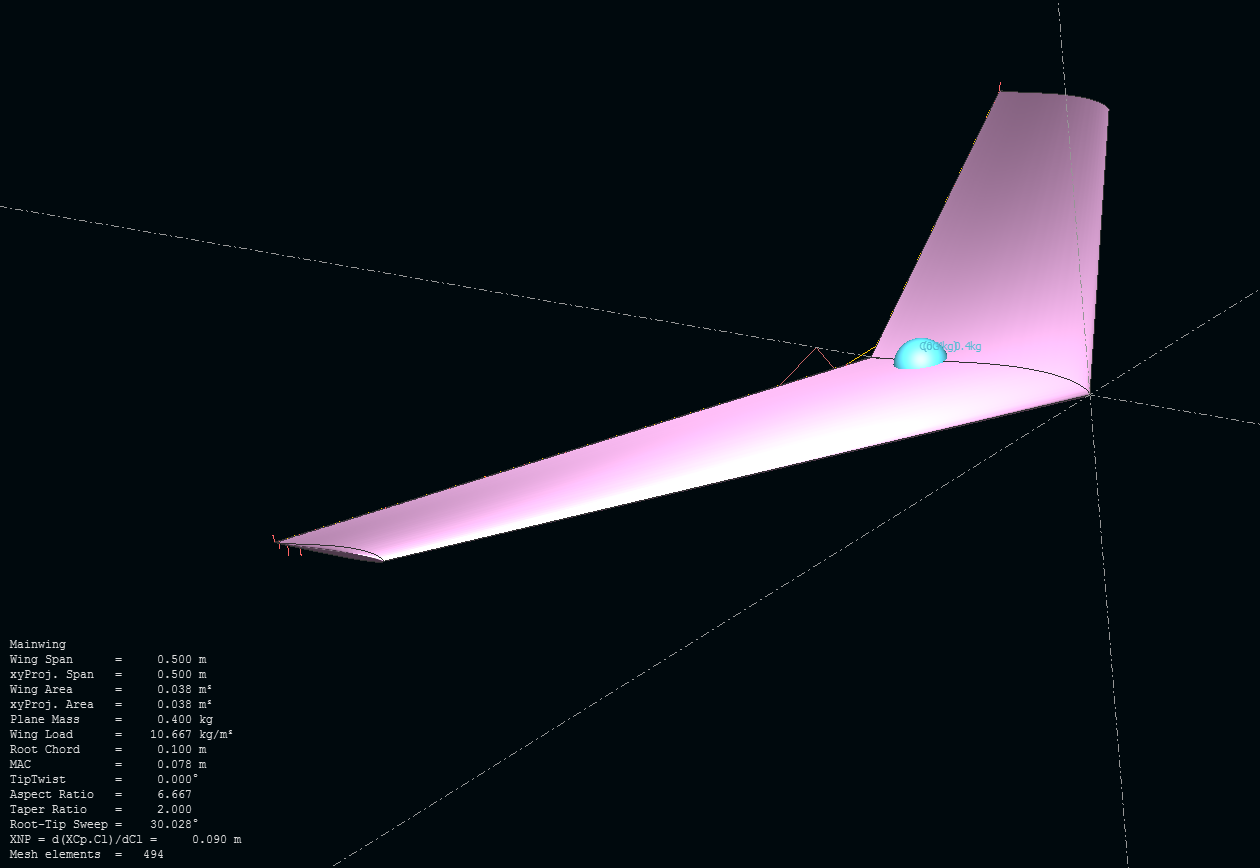 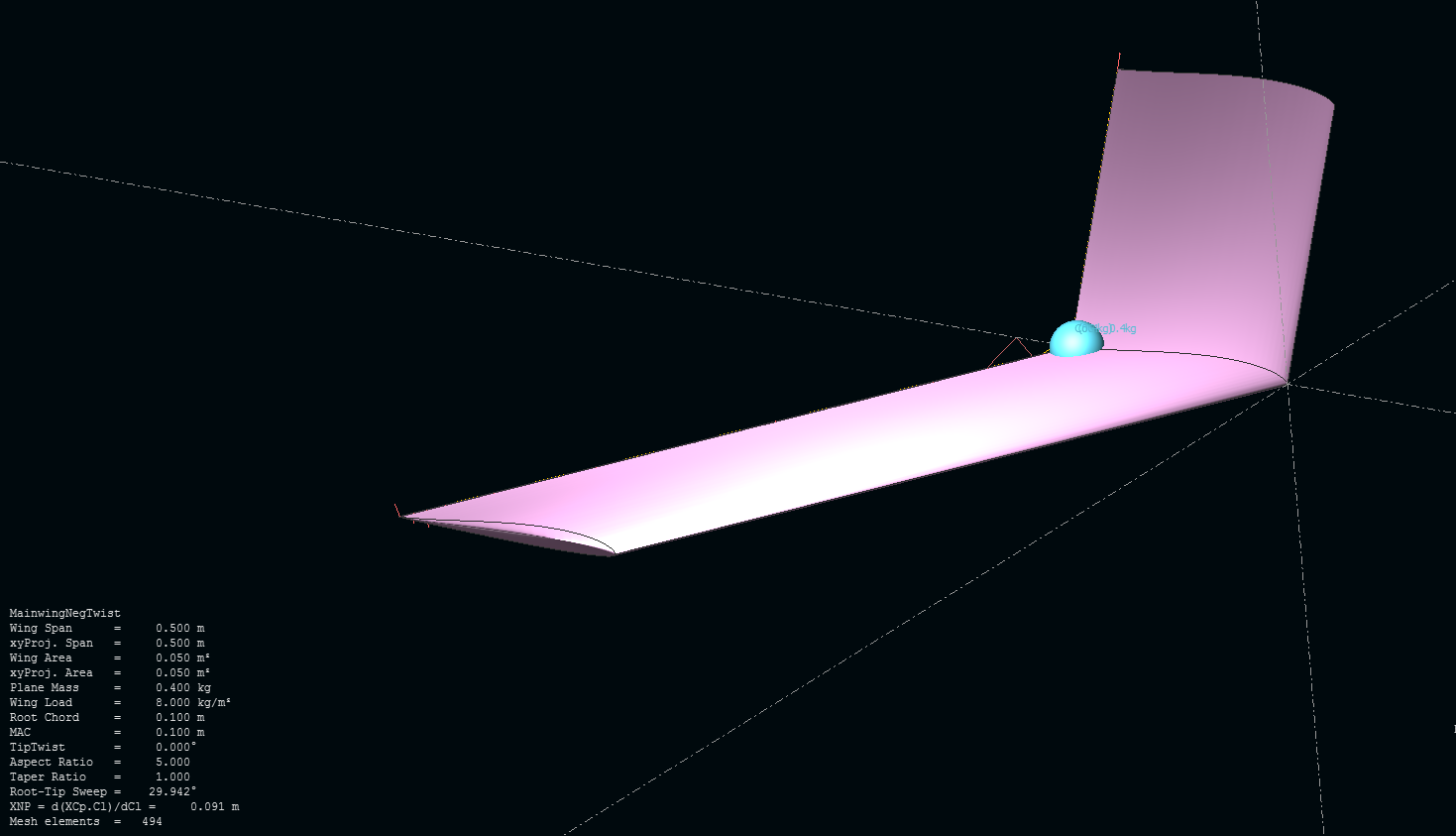 I designed another plane with the same 30 deg sweep, same airfoil and an aspect ratio of 10 (span .5m, root & tip chord .05 m, no twist). Performance keeps getting worse. Only AOA at 0 makes sense to me but that's out the window.

In addition to Chris' answer, I have had a look at your project file and could not readily reproduce your problem. I suspect the issue was in a combination of poor discretization (I increased the resolution of the airfoil and wing somewhat) and incorrect methodology (fixed-speed instead of fixed-lift).

Here are the XFLR5 results for fixed-lift tests (using 0.4 kg) on the following designs: 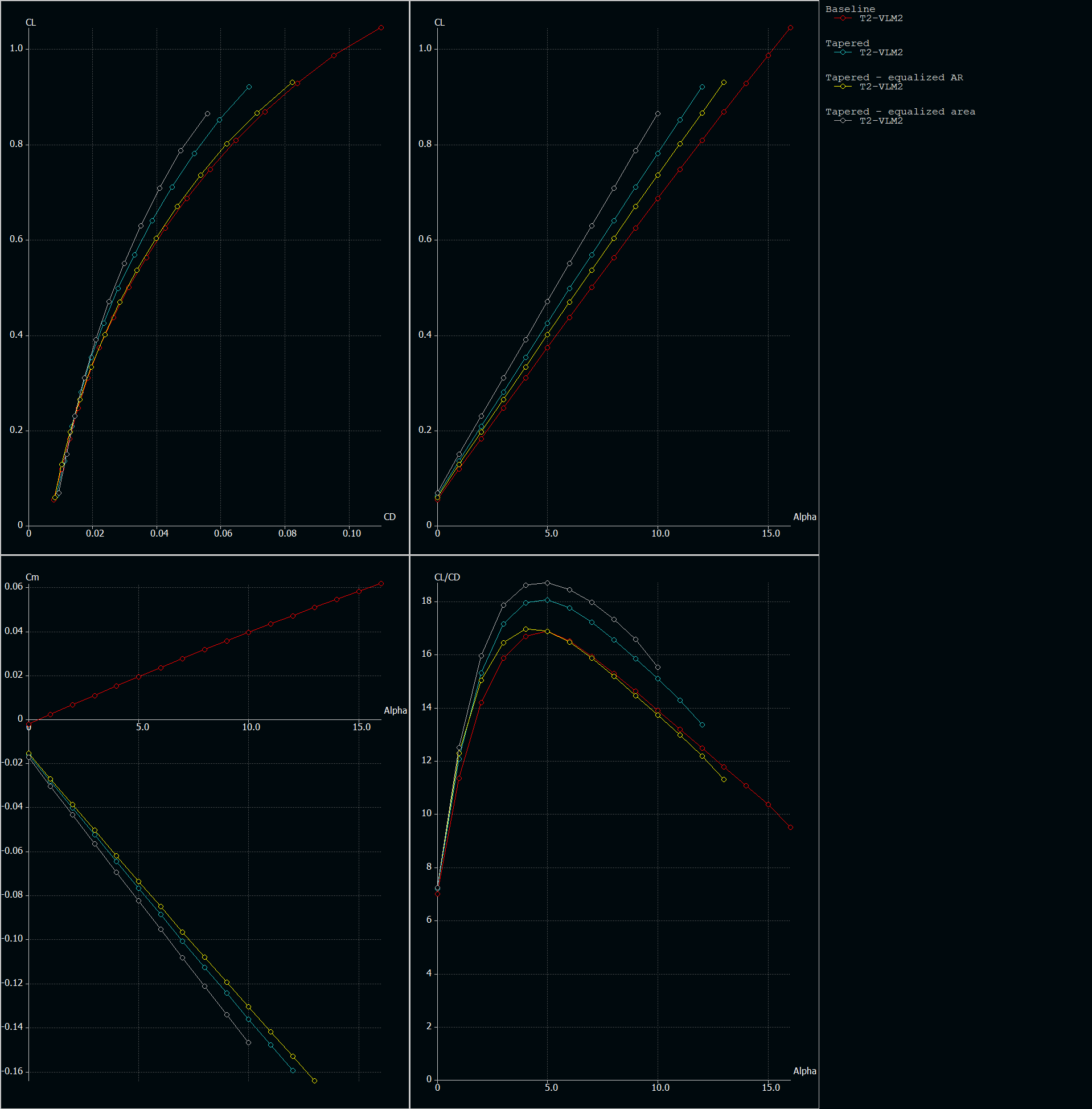 As expected, efficiency gains are proportional to AR increases. You can have a look at the updated project file here (make sure to click Show all Polars).

It may be inaccuracies in your modeling method; it's hard to say without more info.

First, this isn't quite an apples-to-apples comparison. The aspect ratio of the first wing is higher than the second wing, so you're varying more parameters than just the tip chord.

The way to think about this is that the CD of a wing is going to be strongly dependent on the aspect ratio $AR$, the taper ratio $\lambda_T$, the chord and twist distribution along the wing, as well as the airfoil distribution. Is the airfoil t/c constant across both wings? That will also have an effect.

It would be clearer to look at a polar of CL plotted against CD; the best point of comparison is to look at the drag generated at the same CL, not the same angle of attack (because the zero-lift angle of attack will change with wing design as well). The second wing is generating less drag, but also less lift at a given angle of attack; the comparison isn't really fair. If you're using a VLM what you're measuring is the CDi of a wing geometry, which is going to be most strongly dependent on CL.

Not the answer you're looking for? Browse other questions tagged aircraft-design flying-wing or ask your own question.

23
Would an aircraft with contra-rotating propellers longer than the plane's wingspan be able to fly?
5
What makes the F/A-XX twin-engined tailless fighter controllable with engines out?
3
How can I find the optimum chord wing length for this wing?
4
What is the purpose of thinner airfoils used near wing tips?
6
Is 1 propeller always more efficient than 2?
8
Have bi-wings been used without creating more drag?
3
What are the scale effects of GA wing tip airfoils?
0
What provides a higher lift to drag ratio, a thick laminar wing or a thinner wing with a vortex generator
0
A question regarding airfoil parameters
1
What is the correct definition of "spanwise" and "chordwise" with a swept wing?