Why does the use of reverse thrust on the DC-8 generate a pitch-up moment rather than a pitch-down moment?

Unlike most aircraft, the DC-8 is certified to use reverse thrust in flight (albeit only on its inboard engines). This serves as a very effective airbrake, although it also produces considerable buffeting (due to the large areas of separated and/or reversed airflow it produces over the wing’s surface).

It also, more interestingly, produces a pitch-up moment (at least according to the CAB AAR on the crash of EA304):

[...] The pilots in this case, if the drive system failed during a PIO rather than earlier, had no way of knowing the real reason for its failure to operate in the ANU direction. In the split seconds available to them for analysis they could easily have concluded that the failure was due to heavy stick forces. Reverse thrust, in addition to drag, produces a nose up pitching moment, a fact known to the first officer if not to the captain, and as indicated previously, they did employ this aid. It is also true that during the time, no matter how short, required to go from forward thrust to reverse, the noseup pitching moment of forward thrust has been removed and therefore contributes to the severity of the dive. Small as it may be, this factor becomes more significant at very low initiating altitudes. [Page 25 of the aforementioned AAR; my emphasis.]

For an aircraft with engines mounted below the aircraft’s center of mass, like the DC-8, only the use of forward thrust would be expected to produce a pitch-up moment (due to the torque exerted by the offset net thrustline), and reverse thrust should produce a pitch-down moment (for the same reason): 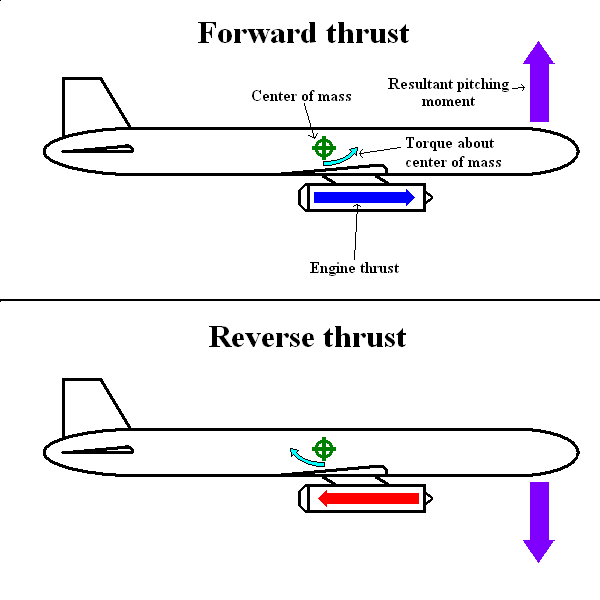 Yet, for the DC-8, the use of reverse thrust not only creates a nose-up pitching moment, but, apparently, creates one that is stronger than that produced by forward thrust!

What you're missing from your diagram is @JohnK's drawing (which I'll borrow) from his answer to your related question, Why does the use of reverse thrust in flight on the DC-8 cause areas of separated/reversed airflow over the wing?

The use of reverse thrust increases the wing's angle of attack (AOA) more than it does for the tailplane (as opposed to if the whole plane had pitched up). And not only that, the inboard thicker part of the wing now starts with turbulent air, this reduces the amount of lift at the neutral point (aka aerodynamic center), unlike what happens in a normal AOA increase.

Since the AOA of the tailplane hasn't changed much, it can't contribute to the stability, and with the big reduction in lift, the tailplane wins and the plane pitches up.

Think of it as deploying spoilers, but spoilers that affect the wing from before the leading edge:

Not the answer you're looking for? Browse other questions tagged aerodynamics thrust-reverser pitch dc-8 or ask your own question.

13
Do the engines still spool up when reverse thrust is selected, but the reversers are not deployed?
7
Will the steep beta descent mode become illegal for new aircraft?
19
What makes it safe for the DC-8 to use reverse thrust in flight?
0
Why does the DHC-6 pitch down when the flaps are retracted, rather than up?
2
Why does the use of reverse thrust in flight on the DC-8 cause areas of separated/reversed airflow over the wing?
14
Why does spoiler extension cause straight-wing Learjets to pitch down, rather than up, and why did it take so long to discover this?
5
In aircraft where the thrust reversers are not locked out when airborne, is it permissible to go around after reverser deployment?
5
Why do most aircraft with variable incidence tailplane have the possibility to trim much more degrees for nose up than for nose down?
2
Are aircraft certified for inflight thrust reversal required to demonstrate controllability in an asymmetric-reverse-thrust scenario?
2
Why do large civil airliners use cold rather than hot thrust reversers?