I have trouble understanding how the battery master switch activates the battery contactor in this schematic from the Cessna 152 manual. This is the model from 1979 or later with an Alternator Control Unit. 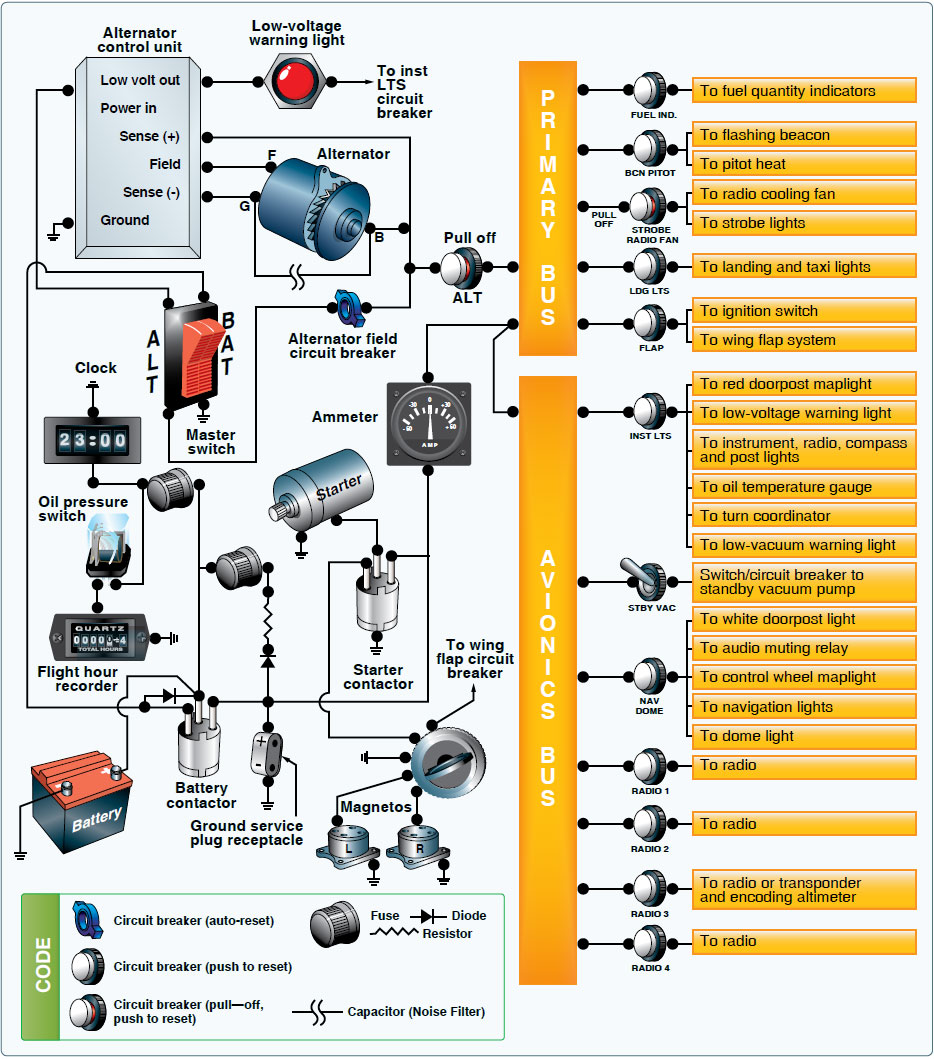 I believe that the battery contactor is a relay that connects the top and right contacts (as in the image), when the left contact is powered.

Initially, all switches are off, the alternator is not turning, and there is no oil pressure:

When I change the battery master switch to the on position, I expect that the battery contactor is closing the contact, and connects the battery via the Ammeter to the primary bus.

What am I missing?

See picture below of the C152 electrical system. 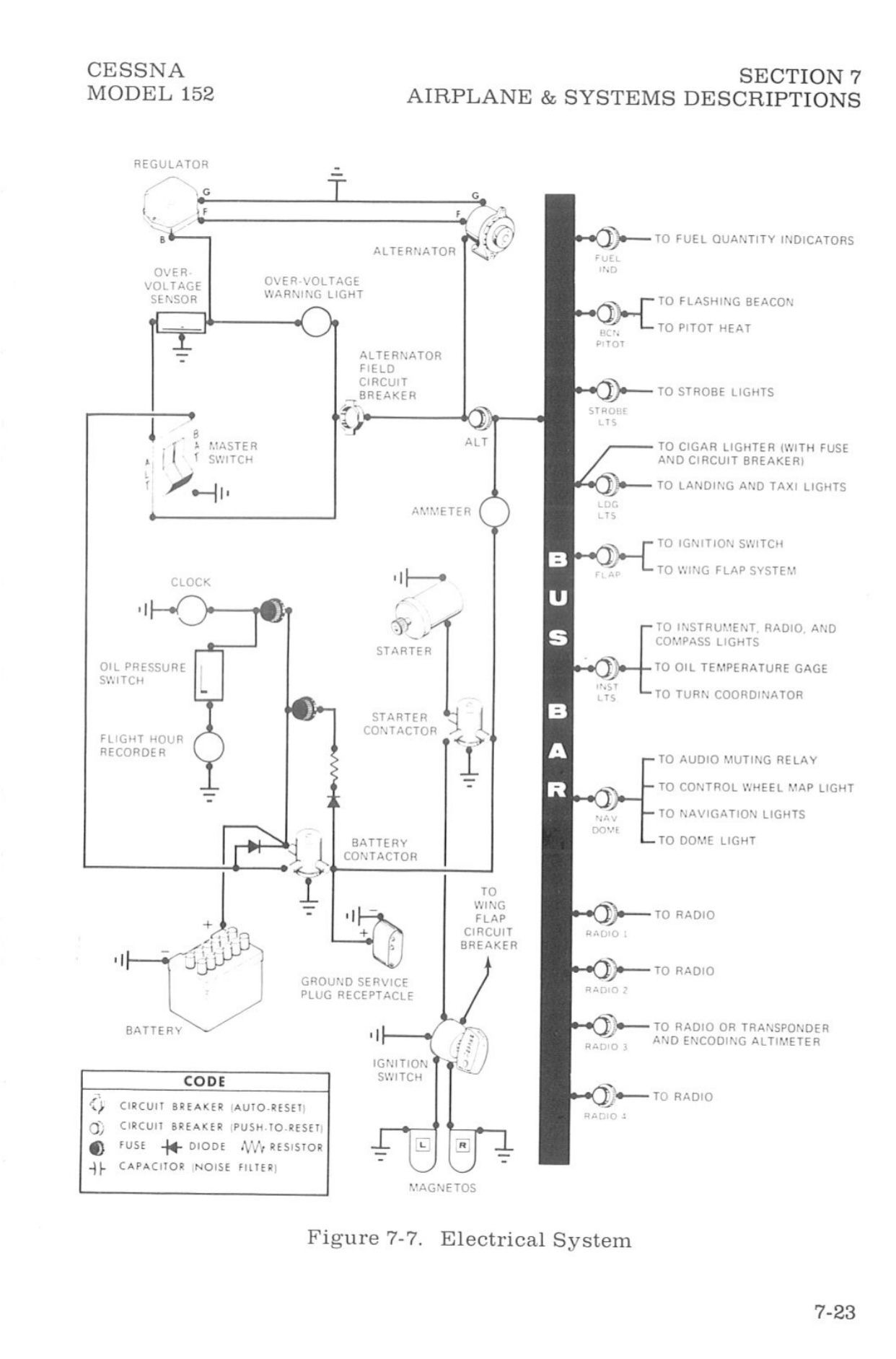 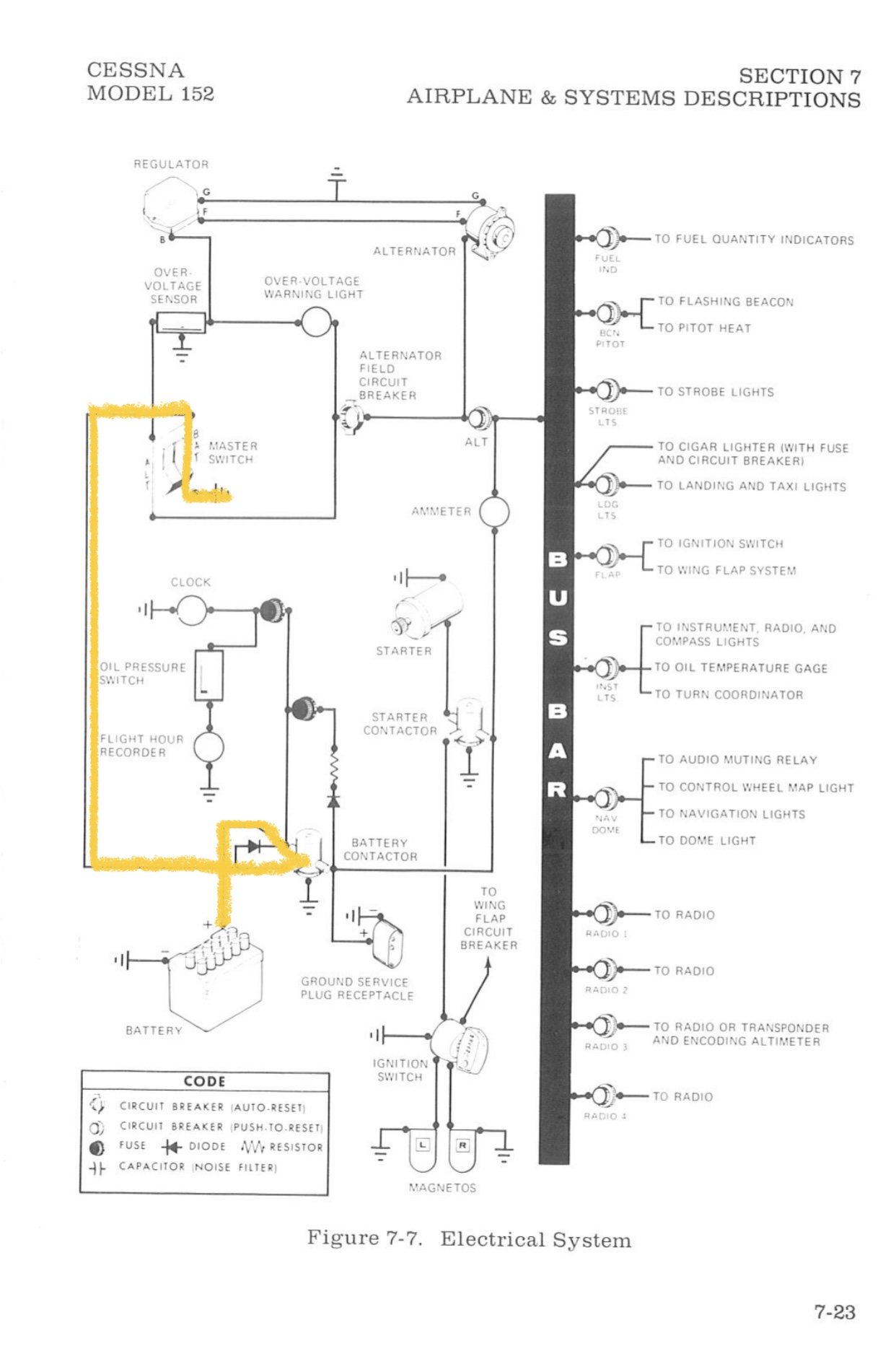 The energized solenoid makes contact between the input terminal and the and the main bus bar, energizing the airplane’s electrical system (blue path). 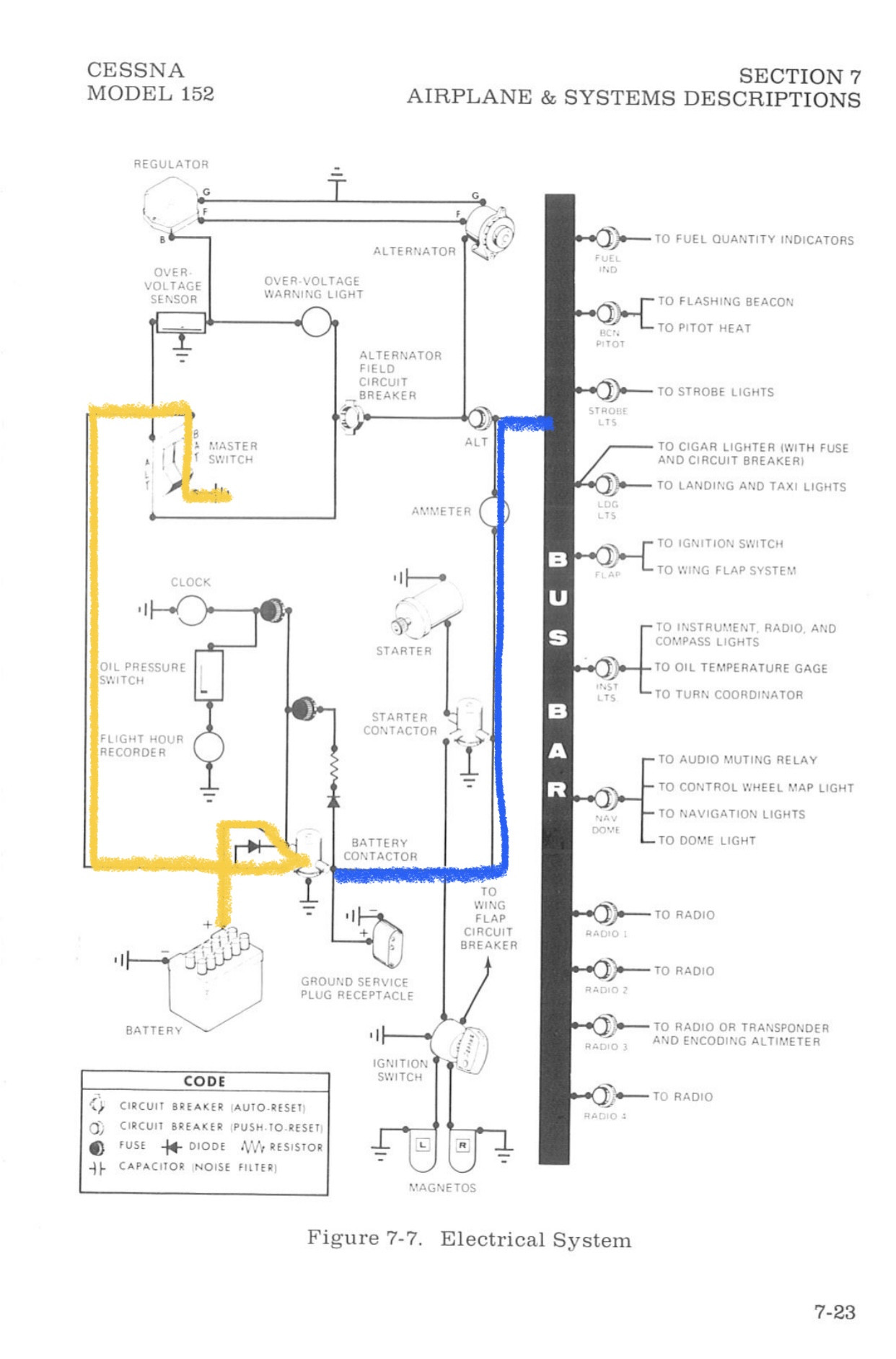 Current from the battery also passes through the ammeter enroute to the bus bar, indicating the rate of current either from battery discharge or battery charging provided by the alternator.

If the ALT switch is not energized, The overvoltage sensor is grounded, thereby preventing the regulator from supplying power to the alternator field coil and the alternator from producing electricity to be fed into the bus (purple path). 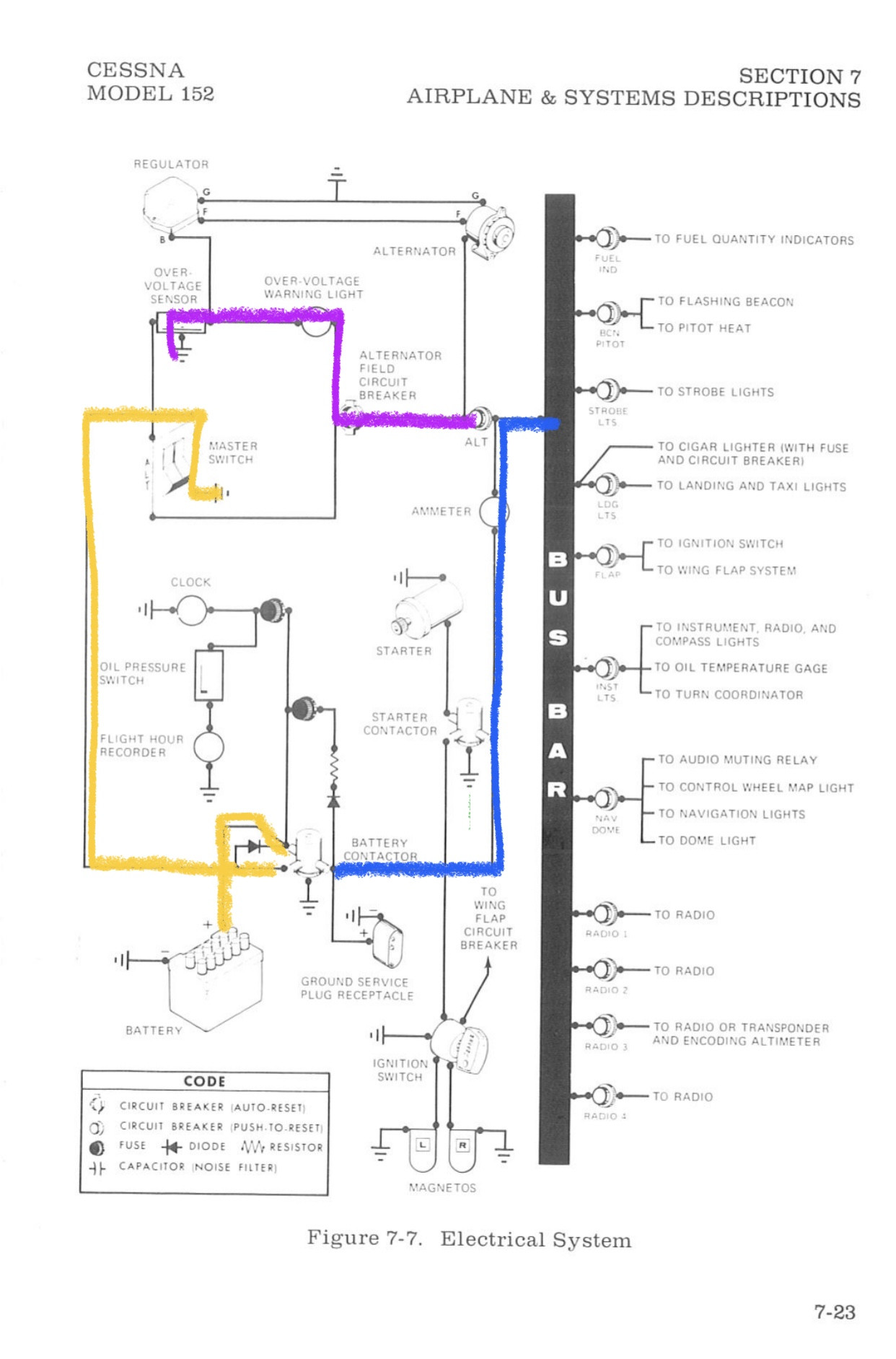 This causes the OVER VOLTAGE light to illuminate, indicating that the alternator is either not producing power to the aircraft electrical system, or the electrical system is operating at an abnormal voltage.

Current to the main bus bar from the alternator may also be interrupted by means of the ALT circuit breaker.

If the ALT switch is energized, the overvoltage sensor is not grounded, battery power is supplied to the regulator, which in turn energizes the alternator field coil (orange path), thereby allowing the alternator to generate electricity at a voltage greater than the battery (green path) when the engine is driving it. 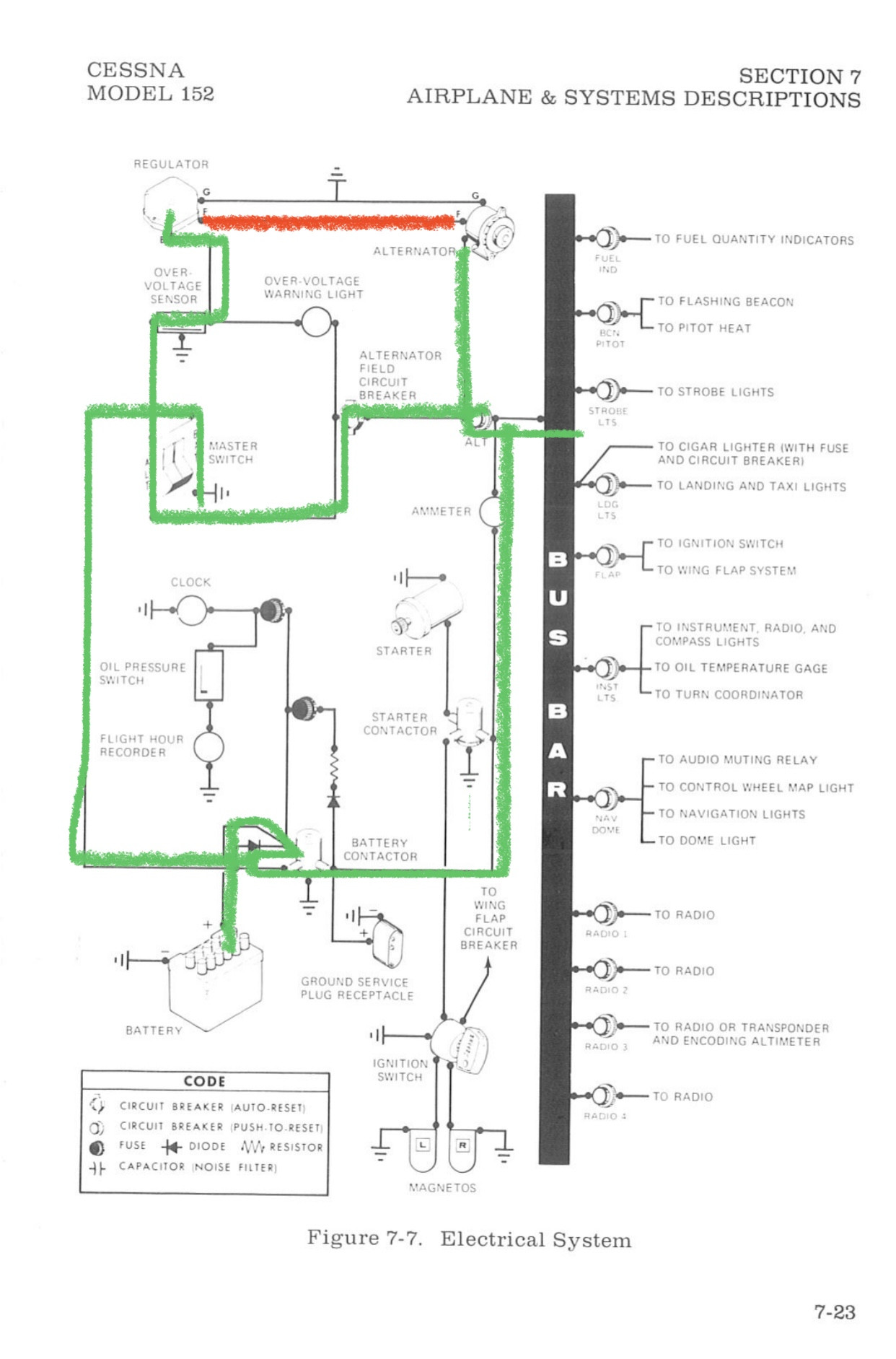 The diode fitted between the two contacts on the battery contactor allows the alternator to charge the battery during engine operation.

Alternatively both the aircraft’s electrical bus and battery charging can be operated by connecting an external power plug into the A/C’s external power socket (red path). 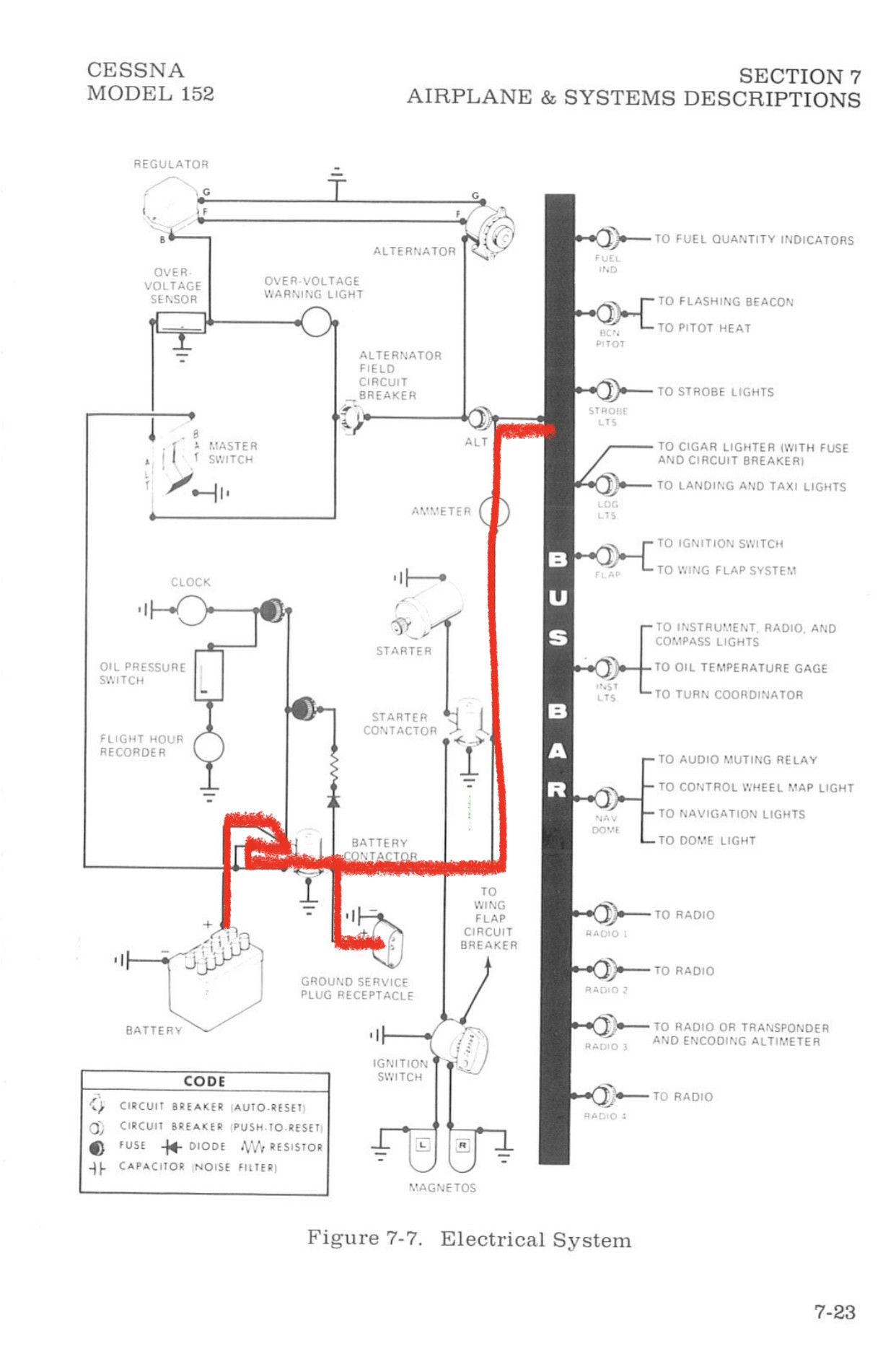 I think two of my premises were wrong.

Like this, the plane will be able to start!

The battery contactor is a solenoid. Closing the BAT switch to ground activates the solenoid, which then physically closes the circuits providing power to the bus boards and starter switch from the battery.

The starter switch connects to yet another solenoid, which sends power to the starter motor. In exactly the same way as the battery contacter, the starter solenoid reopens when the key moves out of the "start" position, stopping the current flow required to keep its "switch" closed for the starter motor once the engine is running on its own.

Not the answer you're looking for? Browse other questions tagged electrical-system cessna-152 or ask your own question.

5
How can I correctly calculate fuel for a Cessna 152?
4
Why is the King Air avionics switching system wired normally closed?
5
Where can I find the correct POH for my Cessna 152?
1
How does the safety record of a Cessna 152 compare to a jetliner in Europe?
3
Which is safer? The Piper Tomahawk or the Cessna 152?
5
Does the Cessna 152 have a name?
4
Does the Cessna 152 or 172 have emergency door cable releases?
19
Can a completely drained battery be recharged via ground power on an airliner like the B737?