Does “trimmed for current speed” mean that the plane will do whatever to maintain the current airspeed?

If I understand right, when you are trimmed for current speed, let’s say 290 KTAS, does that mean if airspeed increases to 295, the plane will pitch up to slow it back down? And vice versa for the speed falling below 290. The plane would essentially dive on it, to get the speed back? Or am I way off?

In a steady state aircraft where the airplanes forces are all balanced then we are left with airspeed and center of gravity. Under normal operations where fuel is not being transferred from an aft tank to the wing tanks or vice versa, center of gravity for a certain period of time remains relatively constant. This leaves airspeed as the primary change in angle of attack.

Your analysis would be correct. If you are trimmed for 290 KIAS (not KTAS like you stated) and you increase thrust the following sequence will occur.

The same type of analysis can be accomplished if airspeed is reduced. The airplane, at the end of the phugoid oscillation, will be at a lower pitch attitude and the same airspeed.

If I understand right, when you are trimmed for current speed, let’s say 290 KTAS, does that mean if airspeed increases to 295, the plane will pitch up to slow it back down? And vice versa for the speed falling below 290.

You are describing the phugoid mode for longitudinal dynamics. The key is that it trades kinetic and potential energy back and forth.

The phugoid behavior occurs at approximately a constant angle of attack, or coefficient of lift $c_{L}$. The lift is just a function of speed.

There are other physics going on, but that is the core of it.

If you were to try this in a huge space station with no gravity, you wouldn't see the phugoid. The energy trade is a key part of the behavior. You would only see the short period.

Yes, in practice the airplane will do "whatever" (as you describe) to maintain its "trim speed". The airplanes are, in fact, reqired to do this. So if you are a pilot and practical considerations is all that matters, this is enough to know. (Perhaps though, you will also be interested in the dynamics of this process and how to control it better).

However, if you are interested to know why the airplanes do this and understand the fundamentals, read on.

First thing to note is what the trim actually does. There are different mechanisms, from aerodynamic tabs to direct stick force control, but what they all do is setting the elevator (or the whole stabiliser) at a certain angle with respect to the wing when no force is applied to the controls.

Now it is ieasy to show that the airplane is trimmed not for speed but for an angle of attack (AoA). 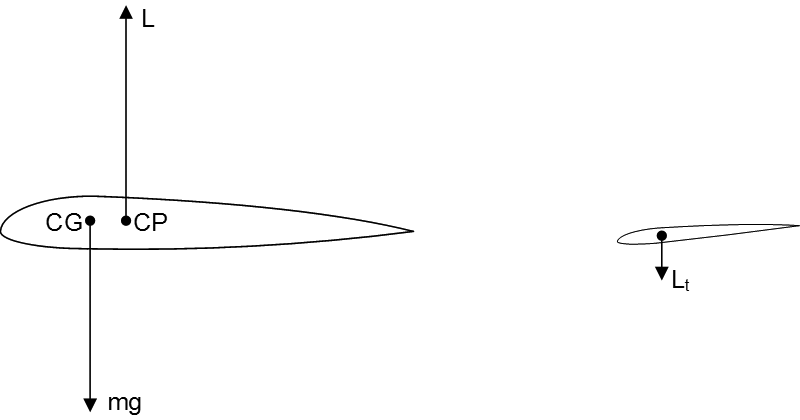 In a level steady flight, we have both the force and moment balance: $L + L_t + mg = 0, Lx_{CP} + Lx_{L_t} = 0$ ($x$ is the arm with respect to centre of gravity CG; all forces are vectors). If we simply change speed, none of the points will move (until we get close to the speed of sound). All the aerodynamic forces will change proportionally (as square of speed). It follows that the moment remains balanced. This can be verified in a wind tunnel: a hinged model will remain at the same angle if we change airspeed.(*)

If we change the stabiliser angle ('trim' it), only $L_t$ will initially change. This will change the pitch balance, and the airplane will start to pitch - until it finds another balance angle. Here, CP will move and $L$ will change, but in the end $Lx_{CP}$ will again be equal in magnitude to $Lx_{L_t}$. This will be the new 'trimmed' angle of attack.

On all 'normal' aircraft (that is, human-sized), this AoA change will happen a lot quicker than speed or altitude change. The aicraft will settle on the new AoA, and only then the rest will happen. Namely, with new lift (at the new AoA) comes vertical acceleration, and also new drag. This all combines into changed trajectory and speed.

As you see, the traditional pilots' belief that trim sets speed isn't entirely correct. A pre-requisite to stabilising on a new speed is that the airplane stabilises on a new AoA. This is why by 'static longitudinal stability' engineers understand AoA stability rather than speed stability. If the airplane is unstable in AoA, it will not live to see 'speed stability', or anything else for that matter.

But what actually happens to a nicely trimmed airplane when only speed changes? Well, by definition, initially it does not involve AoA change, and so the process is relatively slow. As I explained above, the moment balance does not change, so there is no tendency to pitch. However, changed lift will cause vertical acceleration (let's say, for simplicity of explanation, that speed and thus lift increased). This causes two consequences:

The ability to track (stabilise) AoA means that the equilibrium can only be restored if speed is restored to its previous value. This will eventually happen, but this will happen slowly because it involves exchange of potential and kinetic energy. There will likely be an oscillatory process (known as phugoid motion), where the initial rise and pitch up sets the airplane for climb, it loses speed more than it should, loses lift, starts to descend, and the process reverses. But once again, AoA stability is the driving factor here.

It is possible to make an aircraft which will be statically stable in AoA but unstable in speed. For example, by having strong positive dependency of thrust on speed (turbojet engines are like that at certain speed ranges). But because speed changes are slow, such aircraft can still be flown by a human - unlike AoA-unstable aircraft.

(*) Strictrly speaking, if we increase speed substantially (and instantly), AoA will reduce a bit. But AoA stability, as explained below, will quickly restore AoA, and we'll be left with just changed forces.

Yes airplanes trim to a speed. The airplane is "in trim" when the tail downforce balances the nose down pitching moment about the airplane's neutral point and it is not accelerating or decelerating. Left on its own (no control input), it will pitch to seek its trim speed when displaced from that speed for whatever reason. If actual speed is below trim speed, the airplane will pitch down because tail downforce is below the "balance value" (and vice versa if it's above).

So if you are below trim speed for some reason, if you just leave the airplane to itself, no hands on the controls, the airplane starts to dive due to too little downforce, and accelerate. It shoots past its original trim speed in the dive, where it now has too much elevator downforce, which makes it start to pitch back up. It will then overshoot going the other way, ending up in a decellerating climb, but a bit less than the initial time. It ends up too slow and starts to dive again on its hunt. Each of these Phugoid oscillations gets less and less and eventually the airplane finds its original trim speed again, more or less.

All this is happening with your hands on your lap. You can short circuit the whole process with timely elevator inputs if you want.

This is "static longitudinal stability". FAR 25.173 requires a minimum level of this "speed seeking" in response to displacement from trim speed and specifies a minimum ability to return to trim speed once displaced (within 7.5% in cruise flight). The airplane will be trimmed for some speed, say 250kt, then slowed down or sped up without any trim change, then left by itself with no input, has to be able to find its way back to trim speed within x knots tolerance, preferably with a relatively small number of Phugoid oscillations as it dives and climbs on its hunt for trim speed. Too slow, it should dive by itself (gently), too fast, it should climb.

In cert testing they will push the nose over with an elevator input, forcing it to dive and accelerate to say trim speed +50kt (or climb and decelerate to go the other way), then let go and watch what happens. It should slowly climb and dive, climb and dive, less and less each cycle, until it settles down to hopefully a few knots from the original speed with nicely damped, diminishing oscillations as it does so.

Trim speed is also affected by changes to the balance of pitching moments and forces, like adding or reducing thrust where the thrust line makes the nose pitch up or down. But for this case we are talking about steady state conditions.

Not the answer you're looking for? Browse other questions tagged airspeed trim or ask your own question.

14
Is trimming for constant speed equal to trimming for constant angle of attack?
10
Why are airliners not inherently “speed stable”?
1
How does change in airspeed affect pitching moment?
4
Why do pilots normally fly by CAS rather than TAS?
5
Do airline pilots use speed stability to cope with unreliable airspeed indications? If not, why not?
4
What exactly happens when power is reduced in trimmed, straight and level flight?
1
Power changes and trim forces. related to position of Center of Mass (CoG), or Center of Pressure?
11
Is it possible for a plane to accelerate easily from 30 to 45 mph in flight while it struggles to reach 30 mph (the engine runs at constant power)?