What is the purpose of the Dash 8’s “TOUCHED RUNWAY” warning light?

The DHC-8-400 (and possibly other DHC-8 variants) has (or, at least, had in late 2007, according to Appendix G of this AAR) a warning light labelled “TOUCHED RUNWAY”.

The extract of the DHC-8-400’s QRH quoted in Appendix G of the aforementioned AAR mentions this warning light at the end of the landing-gear abnormal-procedures section, and says what to do if the light illuminates, but not what the light actually indicates:

The landing gear of a DHC-8-400 (or, indeed, of any aircraft so equipped) routinely touches the runway, and the ramp, and the taxiways, and the hangar floor, all the time during routine operations - indeed, touching the ground (including, but not limited to, the runway) is literally the primary, and very nearly the entire, purpose of landing gear! So what does the “TOUCHED RUNWAY” warning light indicate that is severe enough to warrant possibly grounding the airplane?

The light is a tail-strike indicator.

The Touched Runway system provides a warning light in the flight compartment. It illuminates when the aft fuselage makes hard contact with the runway on take off or landing. The system consists of a frangible1 switch located at the bottom of the aft fuselage, activating the warning light. The system is powered from the 28 Volt DC right main bus. Once activated, the frangible switch can not be reset but must be replaced by maintenance personnel. Source: Smart Cockpit. 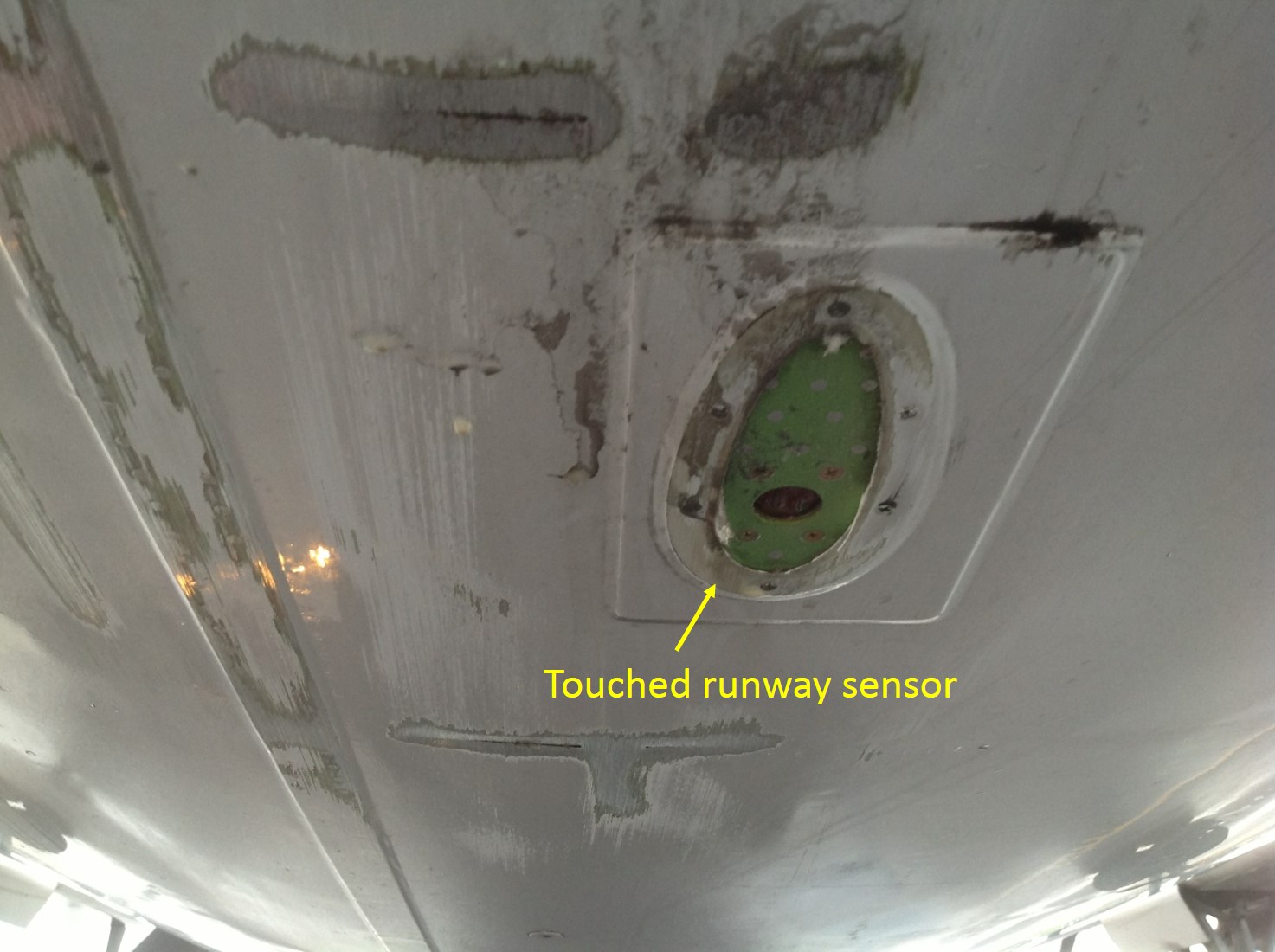 The reason for the light is that tailstrikes are very easy to do on the 400 due to the stretch of the rear fuse with not enough landing gear lengthening to compensate, so they are more limited to the deck angle when landing and taking off than most a/c. This isn't a problem on the other shorter -8s and is mostly unique to the 400.

When you land or take off a 400 you pitch to a certain attitude and avoid pitching any higher (I forget the number - 10 or 15 degrees or something like that) and on landing you control the touchdown by feathering off the power while holding the pitch attitude constant. You don't just go to idle and hold it off hold it off hold it off, pitching ever higher until the mains touch.

It's a bigger problem when landing at one of the lower landing flap settings (-8s don't need to be full flap only for landing and the lower settings are more efficient) which puts the deck angle higher in the first place. Landing at full flap it's not so bad. I know one acquaintance that has bumped the tail on the 400. Not that big a deal.

4
What conditions cause the gear-up warning to sound on a Bombardier DASH-8?
2
What high-lift devices are used on the Bombardier Dash 8 Q400?
12
What is this on the starboard engine of the Dash 8?
9
What do the various lights in the overhead aisle light cluster of a Bombardier Q400 NextGen represent?
10
What did the "gear warning horn" on the North American P-51 sound like?
4
Why should autofeather only be used for take off on the Dash-8 Q400?
7
Why does the low voltage warning light not illuminate when the alt switch is on, but the engine is off?
7
What is the use of this object in the cockpit of a Bombardier Dash 8 Q400?
6
How is the Dash 8 Q400 so fast?