How to identify different pipes / hoses on aircraft engines?

When looking at an aircraft engine (without any cowlings) is there an easy way of identifying what pipes are for fuel, air, oil, hydraulics etc..? Maybe certain fluid pipes are different size diameters or do you just have to know the engine system and components they are providing to be able to tell?

You can guess what most of the tubing goes to if you know a few of the parts under the cowl and have a general understanding of how engines work. You can also get a good idea of what each part is by studying the parts catalog for the aircraft. You can view the Parts Manual for my Cherokee and an Arrow that I fly. 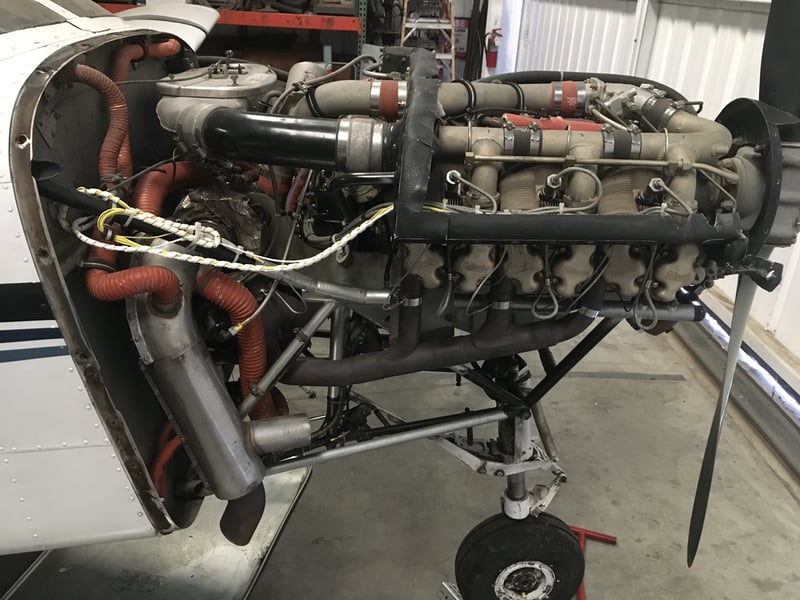 Let’s start with easy ones to identify. You should be able to find the tailpipe rather easily. Notice in the picture of the Arrow that there are a lot of big orange tubes. That’s called scat tubing and it is used to move air around the engine compartment. In most singles, there is a shroud around the muffler that has orange hoses coming out of it. The ones going into the firewall provide cabin heat and defrost. The ones going to the carburetor provide carb heat to prevent icing.

Fuel injected engines also have small lines that put fuel directly into each cylinder. The line entering the "spider" at the top is a fuel line and you can trace it back to the fuel pump. 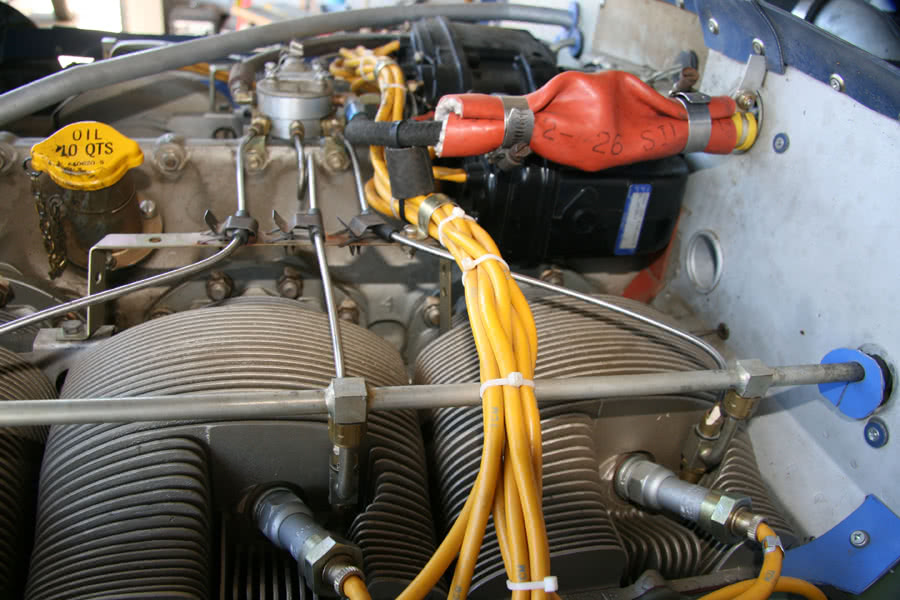 The brown hose in the picture below going to the spider is a fuel line. 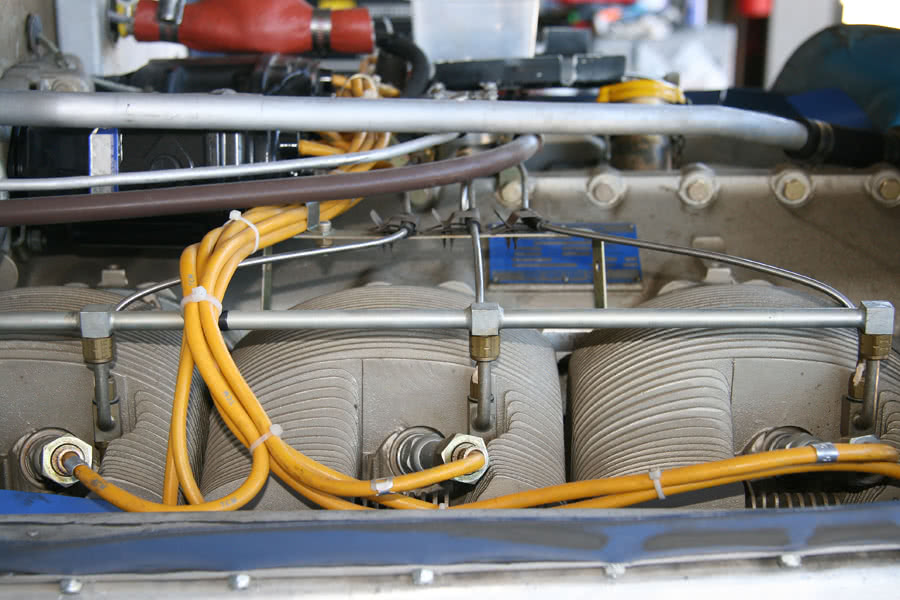 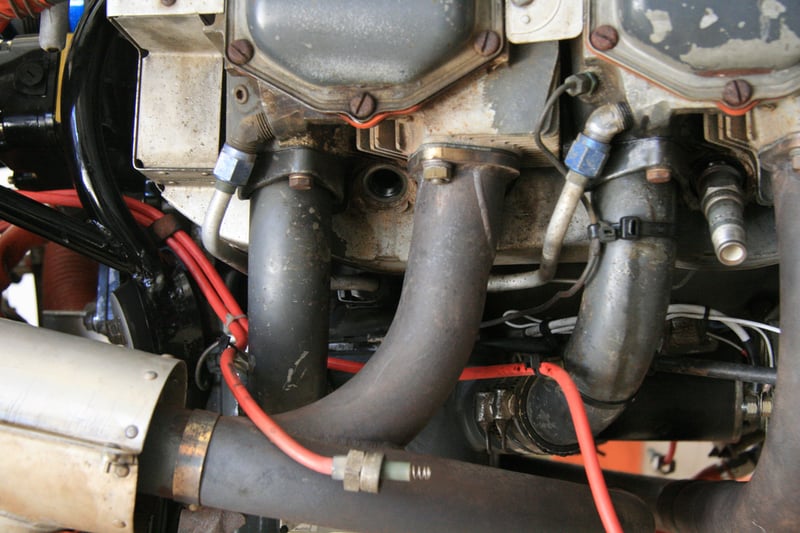 Compare this to the carbureted engine in the Cherokee. The more rusty pipes are the exhaust and the cleaner blueish pipes come from the carburetor with air and fuel.

If you can find the vacuum pump (the dark item to the right of the oil filter with the red bands) you can identify the hose going to the attitude indicator and heading indicator. There’s usually a filter attached to the hoses and a line leading to the vacuum gauge—although sometimes that is inside the cabin. The big open-ended hose is the exhaust for the pump. 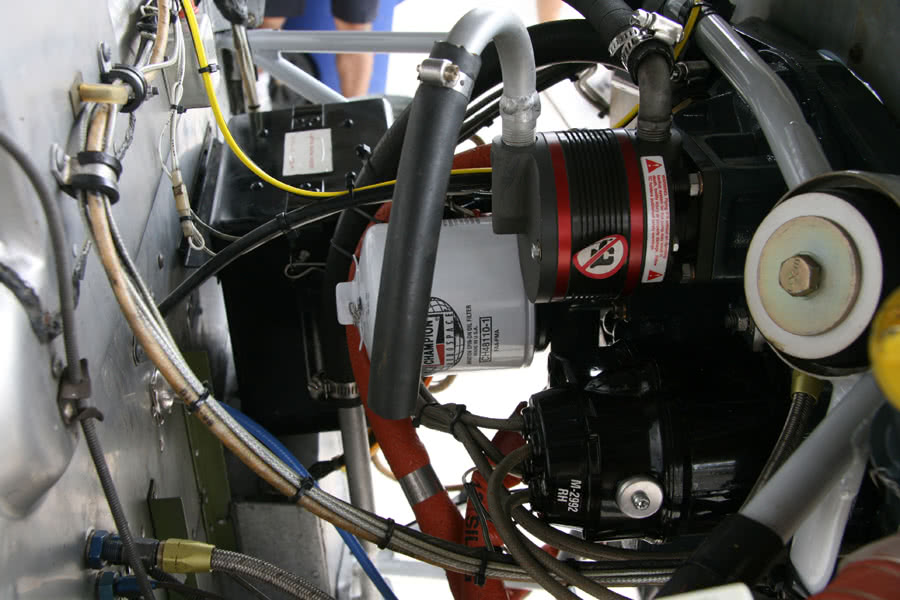 Here’s another four cylinder where you can see the intake and exhaust. Notice the silver lines with the blue fitting. Those are primer lines. At the bottom left is an oil cooler. There is scat tubing bringing air to the cooler and two lines going in and out. 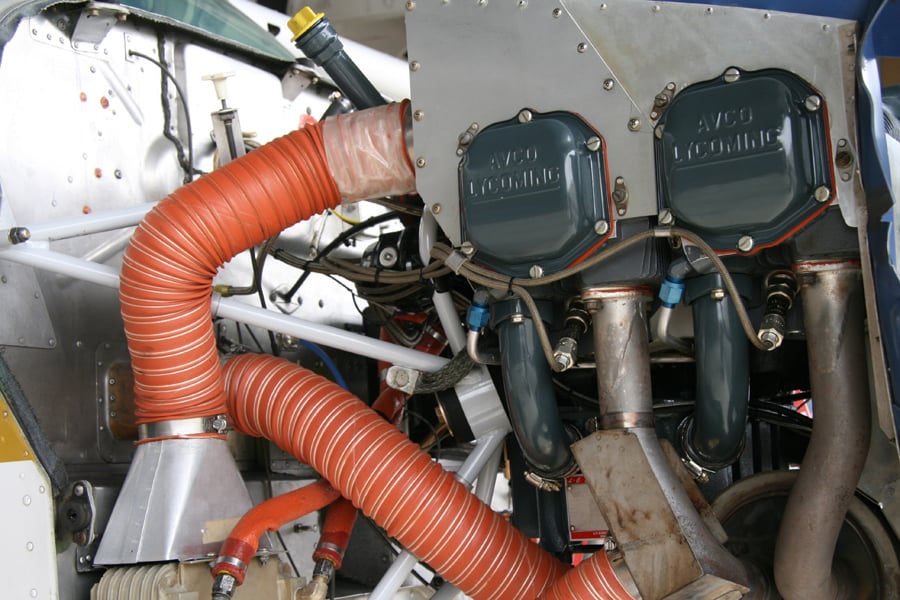 Oil coolers are often in the front of the cowl like this one. If there are lines attached to something that looks like this, they are oil lines. 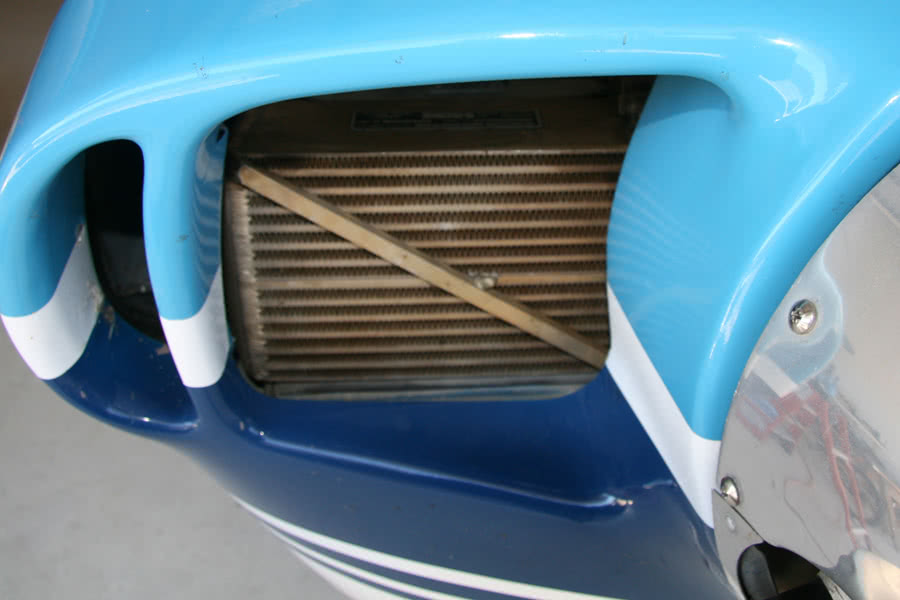 This is a different method of plumbing carb heat. Rather than coming off the muffler hot air comes directly from the engine. 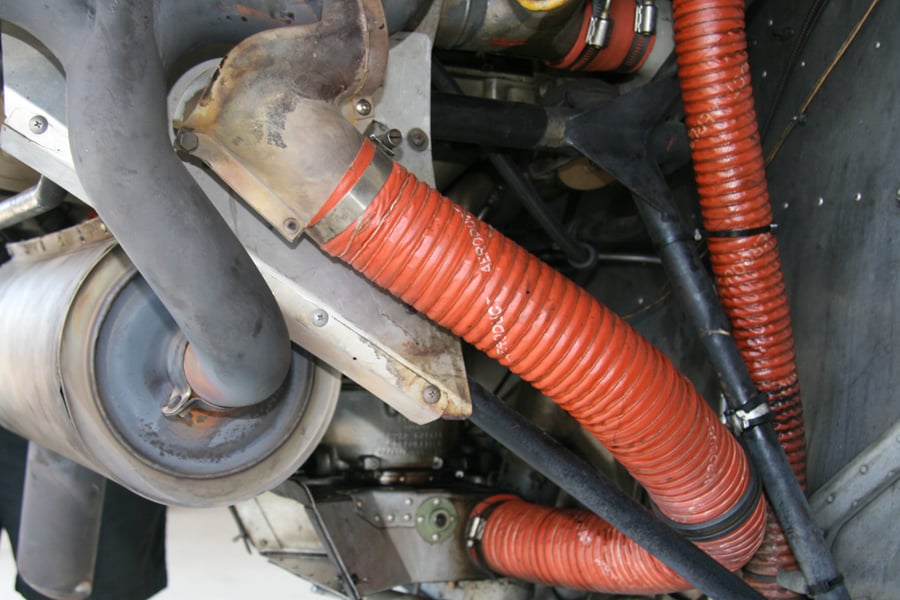 Here’s a picture with lots of hoses. 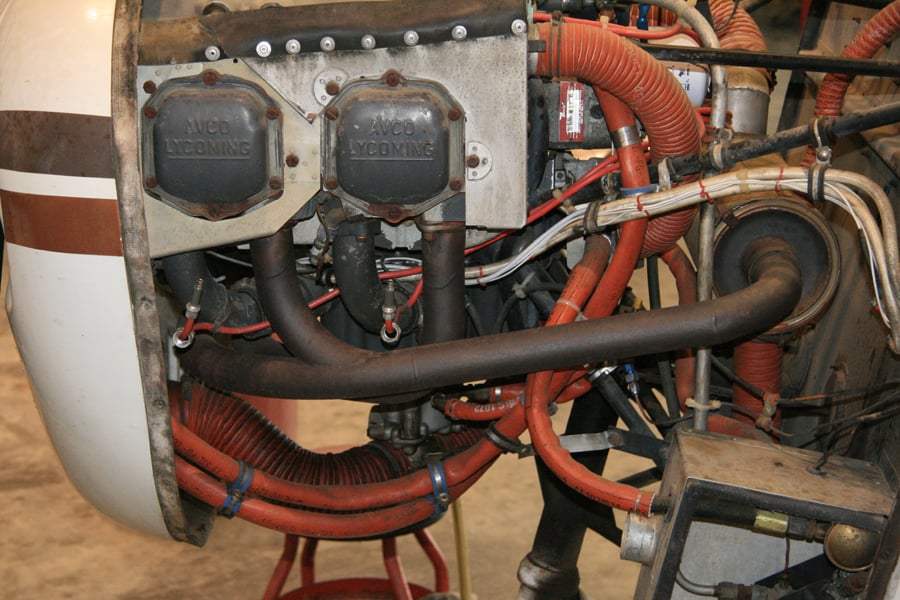 The two small hoses at the bottom of the picture are attached to the oil cooler. If you follow them back you’ll find the oil pump.

The vertical silver tube running from the top of the picture, down past the muffler, and out the bottom is the crankcase breather line.

The box in the bottom right-hand corner has the electric fuel pump (boost pump). The line coming out of it is a fuel line. The silver tube in the box goes to the gascolator.

You should also see an oil line going through the firewall that measures oil pressure and one for fuel pressure but I don’t have pictures that show them.

Air pipes are always going to be a lot larger diameter than everything else. But beyond that I don't know any general rules. Oil fuel and hydraulic lines can look pretty similar. If you narrow it down to one specific engine (e.g. a cfm56-7) someone might be able to give some heuristics. But just engines in general is pretty broad.

On GA airplanes you will usually see black braided hose made to MIL-H-8794 (several thousand PSI burst pressure) used on anything that carries fluids under significant pressure (engine oil, fuel, brake lines, and coolant on an engine with liquid cooling). The most common is Aeroquip 303 and Stratoflex 111, which have a black braided cloth kind of outer surface texture (with the hose model printed along it in yellow or white).

On transport airplanes and maybe on some GA airplanes there will be sticky wrap-around printed identification tape that says FUEL, OIL etc. Absent that, you have to go by the components that the hose runs to (like a hose going to an oil filter or cooler).

As a general rule on a light aircraft, hose that is fairly thick, 3/4 to 1 inch thick in an engine compartment is probably engine oil and smaller hoses of say 1/2 or 5/8 inch diameter are fuel or brakes.

Beyond that, if black rubber hose has a smooth texture, it will be low pressure hose used for vent lines, or instrument vaccum pump lines, like Aeroquip 306.

So to summarize, on light aircraft:

One problem is, on fuel, oil and hydraulic lines under the cowling, the hoses are usually nowadays covered with protective firesleeve, which hides what is under, so often you are stuck in the end with identifying it by what is at the ends regardless.

10
Do lights on wingtips change color at different times of the day?
40
How do aircraft stall warning systems work?
35
How does WiFi work on an aircraft?
10
Why do similar Airbus and Boeing aircraft use different flap and slat mechanisms?
3
Could you help me identify a sound that began before pushback?
6
How does the Aerobridge dock with an aircraft?
0
How does thrust relate to horsepower on turbocharged engines?