Is the F-16 capable of taking off during a nerve gas attack?

I haven't previously read about and couldn't find anything about chemical warfare filters equipped on the F-16's life support system. Does it have any?

However, I glanced at this info card from Cobham on F-16 Support Equipment: On-Board Oxygen Generating System.

Perhaps naively, it seems like enabling the emergency oxygen supply while taxiing and takeoff for the F-16 would allow it to still get in the air? Is there enough time to do this? Is the emergency oxygen supply stored pre-pressurized or does it require to become pressurized by the running engine? In that case, I suppose this is a futile effort. This is all of course, assuming a rather unlikely scenario where the hangar for the aircraft is assumed safe enough to even start up the aircraft in the first place.

What if the hangar is also unsafe? Can anything be done for the pilot and crew, beyond this? I suppose the crew could wear hazmat suits, but again, what about the pilot? For some aircraft, such as the SR-71, I believe pilots wear pressure suits before getting into the aircraft. However, then I assume the aircraft is then required to support this type of equipment, which I doubt the F-16 does.

Does any nearby nerve agent attack effectively ground all aircraft? It seems like something there should be a solution for. 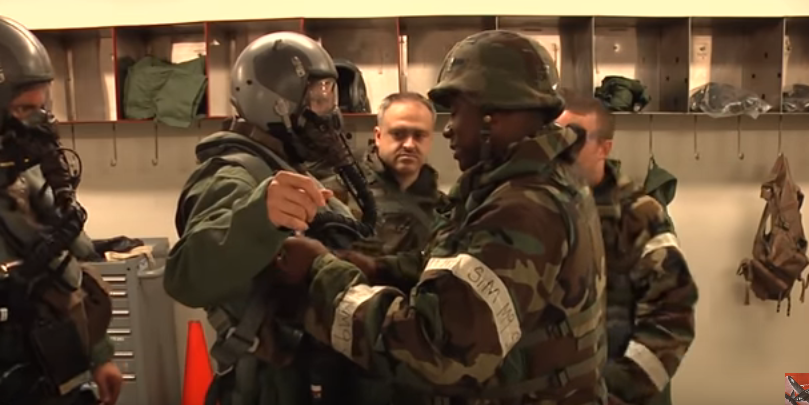 If the base is equipped, then yes. The ground/flight personnel don the specialized suits for chemical/biological warfare.

And according to thedrive.com, a suit is also available for the F-35, though it took a decade to design. The delay was due to the F-35's complicated "enhanced man-machine interface".

Not the answer you're looking for? Browse other questions tagged f-16 oxygen or ask your own question.

3
What problems would the early F-16 have if they were to fight during night?
7
What is the procedure for restarting an F-16 in the air?
6
How can the F-16 remain stable when there is a loss of hydraulic power?
7
Are there any plans to make the QF-16 into a drone for actual combat missions, or a fully autonomous fighter?
2
In F-16 the pilot or FLCS , use the rudder to address the adverse yaw effects in direction of roll during an aileron roll? or opposite way?
5
Does the F-16 have any armor at all?
7
Can an F-16 land on an aircraft carrier, at all?
3
Ailerons deflection of the F16 in take off and landing gain?