How does the engine wash improve engine performance?

According to maintenance manual, we usually carry out engine wash (CFM56) with pure water as scheduled task. Pure water is injected into the engine from the LP compressor inlet while the engine is cranked.

I wonder if the engine performance would improve significantly after having a wash. What is cleaned from the engine gas path? is it carbon residue or something else.

As it is said that the water should be injected at 1 o'clock position on the LPC (aft view), why does it need to be at that specific position? does it clean certain components at that position? Thanks for your explanation.

A performance increase after a compressor wash is expected to happen, but it does not return to the original performance as there are more degradation mechanisms at play. This answer explains that organic build-up causes a change in airfoil shape causing the recoverable performance degradation. Another source may be deposition of salts and dissolved constituents to deposit on the blades as a result of ingesting salt water from which the water evaporates in the hotter stages of the compressor. E.g. erosion is a non-recoverable degradation (for a compressor wash). This is clearly shown in the figure below. 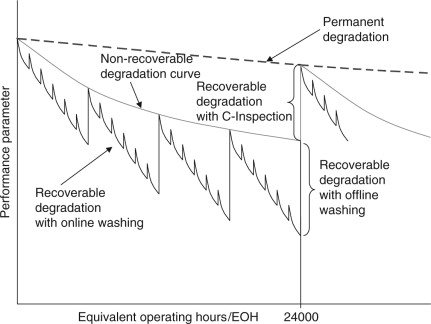 I wonder if the engine performance would improve significantly after having a wash.

The performance increase is considered significant enough, else we would not go through all the trouble of performing the procedure. Fuel costs is one of the major direct operating costs, reducing fuel costs by washing the engine doesn't only save money, it also reduces the amount of used fuel (nice green image for the airline).

As it is said that the water should be injected at 1 o'clock position on the LPC (aft view), why does it need to be at that specific position?

This could be done to prevent build-up of water in the lower section; now it has to travel half the engine down, by the time it reaches that location the water will be transported aft by the churning blades. The water is therefore better distributed, which is confirmed by this practical answer.

The compressor blades accumulate a coating of organic material from the atmosphere on the blades, which in the later stages, where the temperatures get above the material's flash point, may be mostly carbon from cooked organic material like pollen and bugs (the same sort of blackened accumulated crud you'll see on the butterfly of a late stage compressor bleed shutoff valve when you remove it). It reduces the efficiency of the compressor since the blade contours are altered in subtle ways by the crud coating. The water bath is just to erode that stuff off. It's basically the same thing as cleaning bugs and dirt off wing leading edges.

Not sure about the reason for the clocking instruction. Either to clean something like a probe at that position, or conversely, (and more likely by my guess) to avoid excessive water impingement on a probe or sensor on the other side.

I work within a engine test facility. During a compressor wash process we inject water and detergent. This also depends on how much work have been carried out during the overhaul on the engine. The positions are given only to provide an even flow of water through the engine. Sadly I have no experience with live aircraft, so I can not comment when their on wing.

Not the answer you're looking for? Browse other questions tagged jet-engine aircraft-performance aircraft-maintenance aircraft-systems engine-design or ask your own question.