Why is the circulation around a centrifugal impeller blade tip the opposite to a wing tip?

Why does the circulation around a centrifugal pump blade tip go from low pressure to high pressure as an effect of the slip caused by the non-uniform velocity distribution (the opposite of a wing tip). The reason stated in my book says that below the blade there is low pressure leading to high velocity and vice versa for the part above the blade. In an airplane, there is vortex at wing ends where air moves from below(high pressure) to above(low pressure) as given in the diagram. 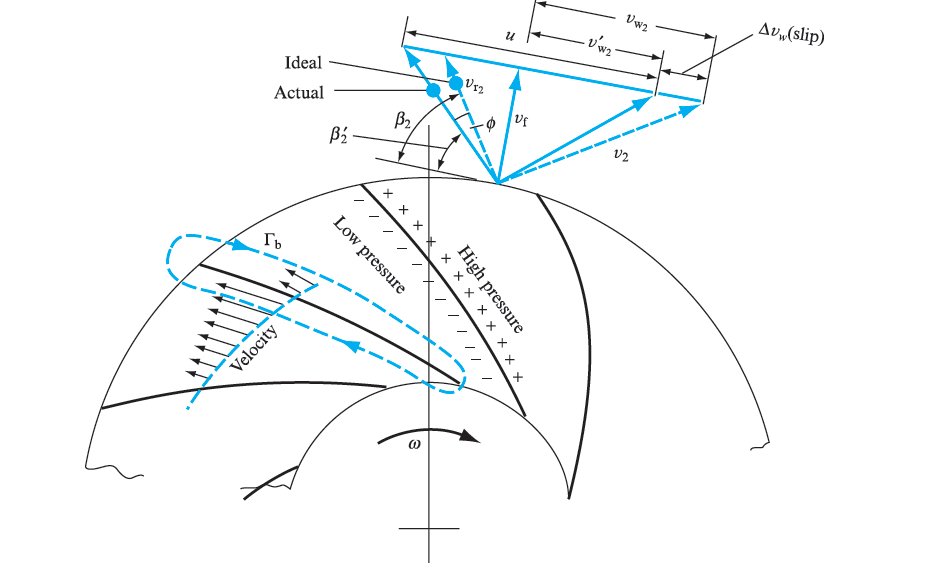 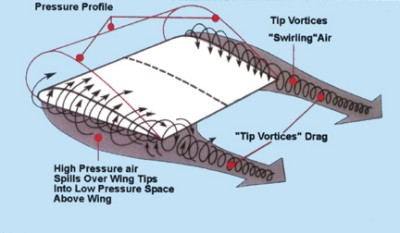 I think what's confusing you is that the text book is using the term circulation to describe speed relative to the average airflow, not actual circulation around the blade.

There's still a black arrow pointing outwards on the high pressure side of the blade - no air is travelling inwards.

I don't fully understand the theory, but I think you're supposed to imagine the surface of the aerofoil (or an infinitely thin layer of air next to it) to be circulating, and causing the velocity gradients.

Circulation is often used in computational fluid dynamics as an intermediate variable to calculate forces on an airfoil or other body.

It is important to visualize the flow into this pump is on an axis perpendicular to the plane of the diagram, flowing towards it. The pump spins "clockwise", there for higher pressure will be on the right side of the blades.

But the centrifugal pump, true to its name, adds energy to the fluid by its rotation, which slings the fluid to the right. The "centrifugal force", really the fluid being propelled to the right 90 degrees from its in flow, drives it at much higher velocity towards the outside of the impeller.

The circulation circled in the diagram seems to be a minor part of the total flow. Though there may be some, the majority of the inflow will be driven towards the outside of the impeller as new fluid is drawn in.

Centrifugal compressor designs are seen in early jets, and are still seen in R/C model jets.

Upon futher inspection, look closely, the circulation is the SAME as a wing. Because the wing is in motion, the circulation may not be fully closed, but the lower pressure areas created by the airfoil as it passes through the air imparts energy to the air in a similar manner as the pump (top lift), as well as the higher pressure area underneath the wing (bottom lift).

The impeller blades are curved oppositely as what we may expect to see in a "wing". Keep in mind this is a rotating device. The outer part of the impeller blade moves much faster.

Not the answer you're looking for? Browse other questions tagged aerodynamics fluid-mechanics wing-tip-vortex or ask your own question.

8
Why does condensation form on the wing especially during take-off and landing?
1
What is the airflow across and below an elevator?
3
Does shrouding a propeller minimize induced drag by equalizing the downwash velocity along its blades?
0
In what conditions are visible Wingtip vortices created?
1
Why is a reduction in lift called 'drag'?
2
What are the disadvantages of a tailless ultralight design?
1
In which direction does air flow over a wing as observed from ground?
1
Why generation of lift is more at mid span of the wing?
3
Once pressure distribution is established, why soft wing at zero AoA without battens can't maintain shape?