Can the pitch stabilizer in the picture really work for a plane or glider?

The image shows an automatic pitch stabilizer (the mechanism in the black rectangle) that is based on the vane 50 whose movements up and down would drive, with the help of a force amplifier system, the horizontal front elevator of a Wright glider or plane in such a way as to maintain the aeroplane in horizontal flight.

The question is, can this mechanism really work, at least theoretically? (A stabilizer based on a pendulum is a fallacy, it will not work. In an accelerated system (the plane) the pendulum does not align to the vertical). 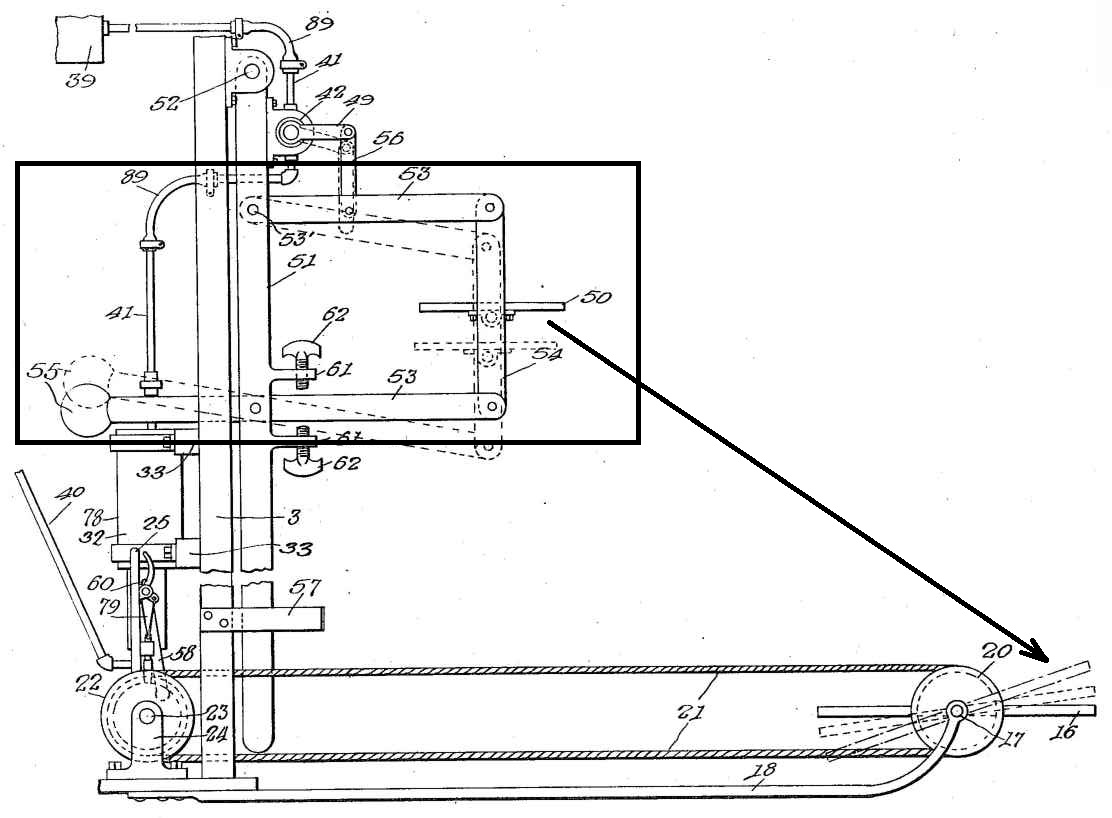 (I am not interested in answers regarding the automatic stabilizer in roll, also described in the patent. It is based on a pendulum and it can not work. My question is only about the pitch stabilizer.)

Yes, this vane-based stabilizer really did work. In fact the pendulum system for direction control also worked as it was used to sense yaw in a slip, just like the ball in a turn and bank indicator.

The entire system worked so well that Orville Wright received the 1913 Collier Trophy "For development of the automatic stabilizer" after demonstrating it for the judges.

The Wright Bros work in automatically controlled flight was overshadowed the following year when Elmer A. Sperry won the 1913 Collier Trophy "For gyroscopic control".

The stabilizer was then offered as an option for use with the sale of Wright 1910-1911 Model B flyers.

However, it saw little use, because on June 18, 1914, a young Lawrence Sperry, as part of a great safety competition, unveiled a totally new type of stabilizer to the world. The safety competition was jointly sponsored by the Aero-Club de France and the French War Department.

In his demonstration flight, Sperry took off from the Seine in a Curtiss C-2, climbed to altitude and flew back down the river. At the appropriate moment, his mechanic, Emile Cachin, crawled 7 feet out on the wing as Sperry lifted his hands from the controls and stood up in the cockpit. The plane sped by the judges as the crowd went wild.

What Sperry had done was adapt a balancing mechanism invented by his father, Elmer, for counteracting the rolling of ships, to an airplane. The device employed two gyroscopes that performed the function of the pendulum and vanes in the Wrights’ device.

Based on all comments the question received, I will try to formulate a clear answer illustrated with a picture.

The vane V will always tend to stay in the same plane as the axis XX' no matter what the glider does: climbs, descends or flies horizontally. If the vane goes toward the upper or lower wing then automatically it will drive the mechanism that changes the angle of the front rudder till the air current pushes the vane in the opposite direction and so on. In consequence, there is no way to predict which direction the plane will align to if a perturbation changed its initial direction of flight.

As a remark, the weight E together with the weight of ED just counterbalance the weights of DC, CB, BA and that of the vane V that is bolted to BC. The sum of momentums of all these weights with respect to pivot D is always zero. The weight E will not tend to skew the parallelogram ABCD in any way. 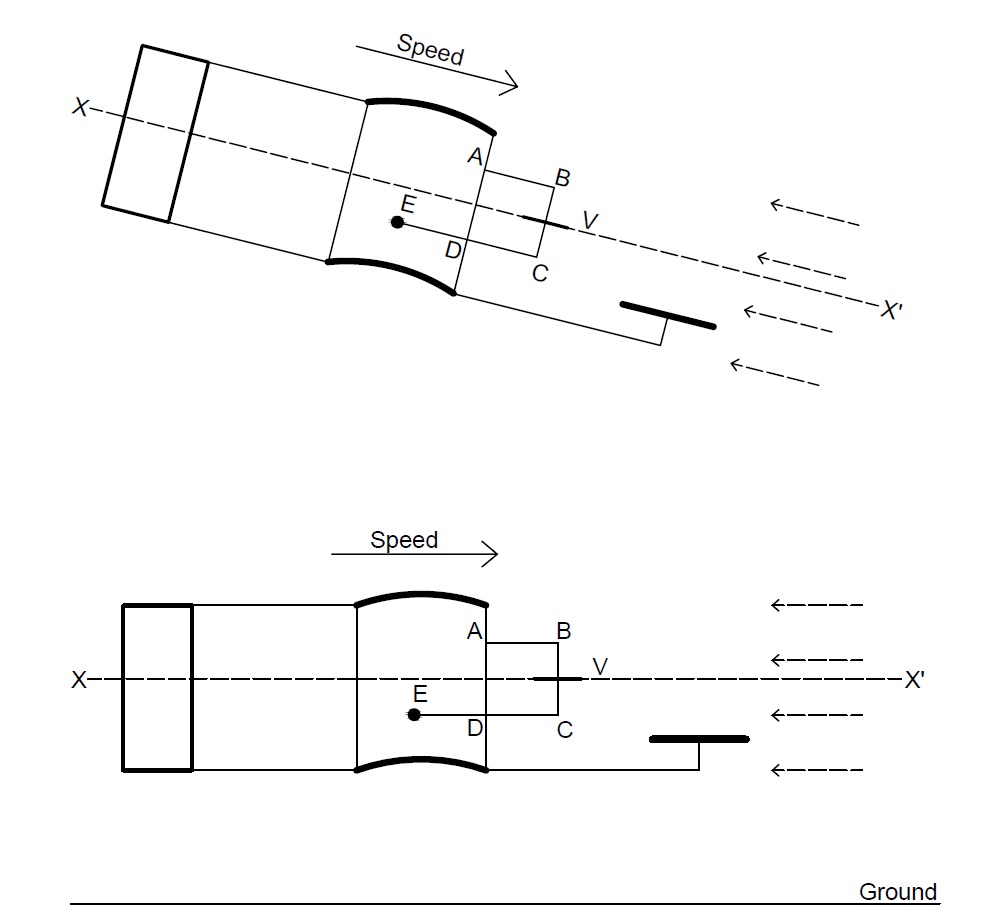 Top: Glider descending. Bottom Glider in horizontal flight. In both cases the position of the vane V is the same.

This appears to be a mechanical version of the modern computer driven Angle of Attack vane / Stabilator pitch control system. The catch is it is based on relative wind. A plane can do an entire loop without changing its AOA with a very good pilot using throttle and gravity.

So, back in 1908, to maintain altitude, one might try a balloon mounted in a container, with a mechanical lever and spring attached to the carburetor. If the balloon expanded from greater altitude, the lever would lower fuel input, if the balloon contracted, the spring would pull the lever back to increase the fuel input. This could also come with disclaimers regarding changes in pressure due to weather.

Setting a plane up with weight slightly forward of the main wing Center of Pressure (Lift) and conventional tail downforce, or forward canard upforce (staticly stable), will do a pretty good job maintaining speed and AOA. Adding or subtracting throttle would make the plane climb or descend at the same speed to correct an altitude deviation.

It is interesting to note, though many hail the Wrights early canard designs, their first commercial success, the Model B, featured a rear mounted horizontal stabilizer and flew with an engine power output of 30-40 horsepower, enough to carry a passenger.

No, I don't see how this would work as a controller for maintaining flight level. The angle of attack on any part of the airplane during a steady-state climb is identical to that of level flight, so there is no additional "relative wind" for the mechanism to work with.

However, a proportional feedback in angle of attack is a valid stability augmentation system. With the right gain, it has the same effect as adding positive static margin. The net effect is maintaining airspeed, which, given the same power input, would also contribute to flight level maintenance. This was a success for the Wrights' probably because its first flyer was statically unstable.

Positioned correctly, it may also serve as a pitch damper. But once statically stable aircraft prevailed, it's likely this was superseded by gyroscopically measured pitch dampers as mentioned in Mike Sowson's answer.

10
Can a pendulum stabilizer for airplanes really work?
2
Did the Wright brothers discover the three-axis control system for airplanes/gliders and the adverse yaw?

10
Can a pendulum stabilizer for airplanes really work?
8
What prevents BFS from becoming unstable when pitching from horizontal to vertical?
1
Why did the Wright brothers take steps to increase the amount of vertical surface area forward of the CG on some of their aircraft?