When can a taxi clearance allow me to cross multiple runways?

I was just reading the FAA instrument procedures handbook and saw the paragraph below in Ch 1. I'm puzzled by this, because I routinely get "Cross runways XX right and XX left on Alpha" as part of my taxi clearance. How do I square that with the statement here?

Instructions to cross a runway are issued one at a time. Instructions to cross multiple runways are not issued. An aircraft or vehicle must have crossed the previous runway before another runway crossing is issued. This applies to any runway, including inactive or closed runways.

The general FAA rule is indeed that ATC cannot issue a clearance to cross multiple runways.

However, waivers are available to airports with parallel runways close enough to make it impractical or even hazardous for aircraft to stop in between them and wait for a second instruction. They are essentially treating such a pair as a single runway for the purposes of this rule.

I'm not aware of any list of airports with such waivers or notification to pilots. However, one could predict whether it is likely by looking at airport diagrams. Consider the example of SFO/KSFO, which has such a waiver on both pairs; even a quick glance reveals why it's needed.

Also, I suspect the main concern behind the general rule is pilots misremembering which runway(s) they were cleared to cross when there is a substantial distance between them. The case of two very close parallels, along with the unusual (and thus memorable) multiple crossing instruction, does not seem to have the same safety concern.

@StephenS is right about San Francisco being an example that is exempt from the 2010 rule. The FAA ATC Job Order discusses this point in § 3-7:

An example for such an instruction I remember hearing on LiveATC is "cross the ones", meaning 1L and 1R. 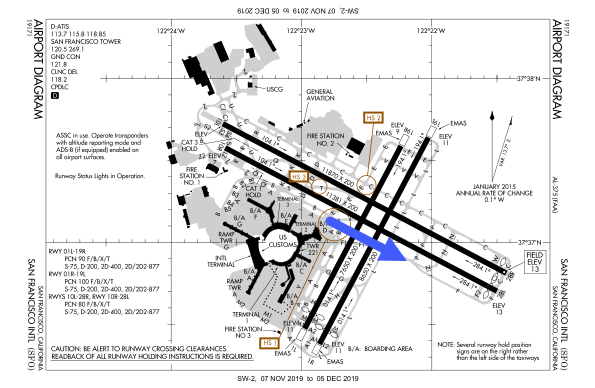 Based on the FAA Safety Alert posted below, since June 2010 controllers were no longer allowed to give multiple runway crossings at the same time:

Not the answer you're looking for? Browse other questions tagged faa-regulations air-traffic-control taxiing or ask your own question.

8
How far ahead will ATC issue runway crossing clearances at controlled FAA airport?

33
Should you wait to switch to the ground frequency until after crossing a runway?
16
How does ATC handle arriving/departing runways that cross?
7
Where can I find airport taxi instruction "code names"?
9
How far can a passenger plane taxi?
9
Can I legally taxi a seaplane in a canal or channel?
13
Does the "follow" instruction give an aircraft clearance to turn onto a taxiway and/or cross a runway?
2
How to correctly interpret the taxi procedures in ICAO Doc 4444?
23
Do I need explicit clearance to taxi on an inactive runway?
25
How can this kind of confusion about taxi instructions occur?