How much of an airplane's forward energy is lost to lift?

An airplane needs to move forward to generate lift, and because energy isn't created from nothing, all the kinetic energy of lift comes in the form of drag, where air (air resistance) turns forward motion into upward motion.

What percentage of an airplane's forward kinetic energy loss due to drag is productive as opposed to unproductive?

In the most simple model for subsonic aerodynamics, drag is split into two components: 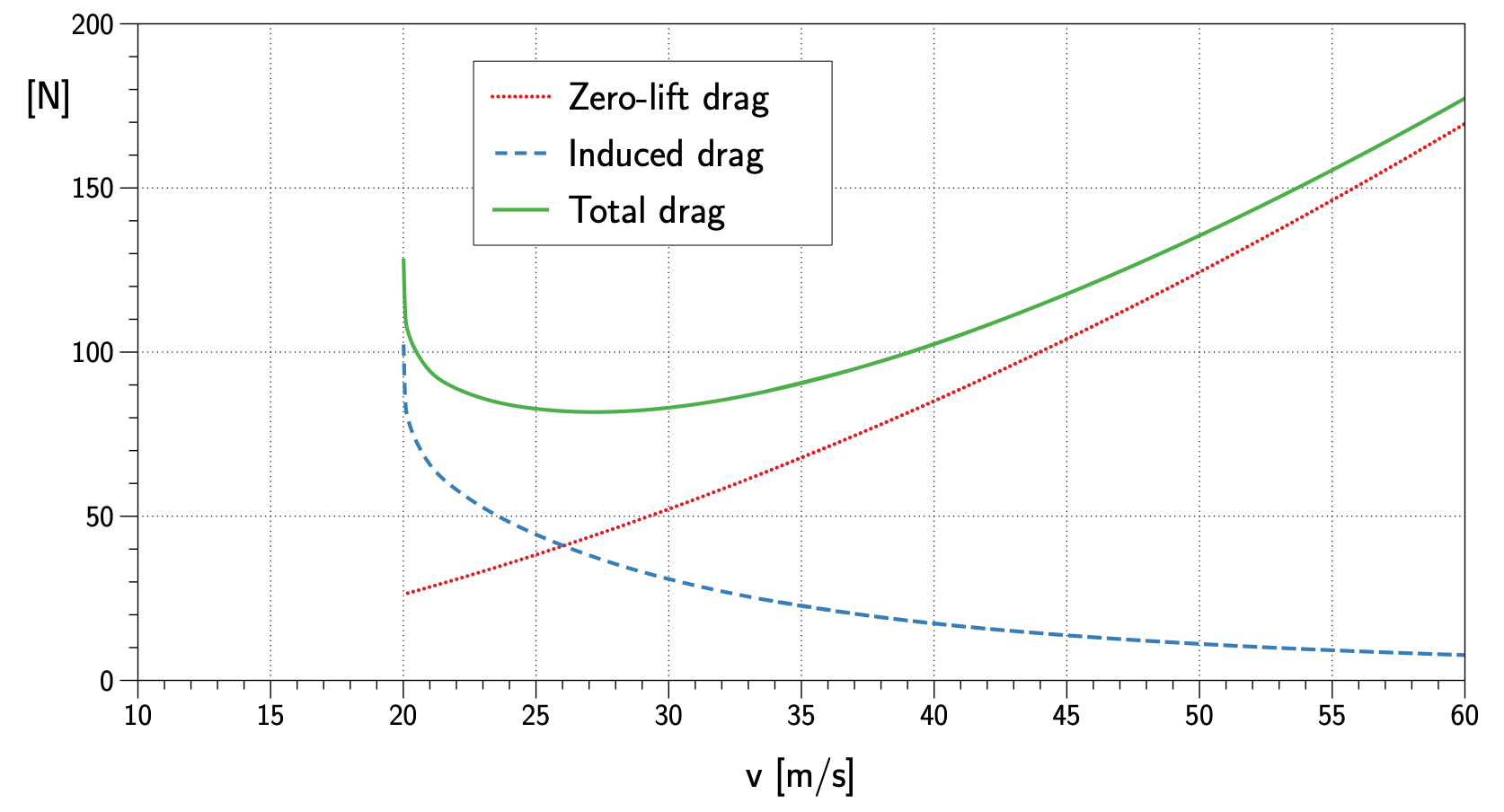 Drag components over speed for a typical glider (own work). The nonlinearity at the lowest speed is due to flow separation when the lift-creating limits of the aircraft are approached. The physics for large aircraft are the same, only the numbers will be larger.

Due to the dependency on the square of airspeed, the sum of both components has a minimum when they are of equal magnitude. However, given enough thrust, a motorized aircraft can sustain level flight at the far right end of that diagram when lift-dependent drag almost vanishes.

No energy is 'lost' to lift. All the energy delivered by the engine is spent, directly or indirectly, in accelerating air downwards in order to produce lift...

You're looking for the "Lift to Drag" ratio - see here for some examples of different things: https://en.wikipedia.org/wiki/Lift-to-drag_ratio

Not the answer you're looking for? Browse other questions tagged aerodynamics aircraft-performance lift aircraft-physics drag or ask your own question.

12
How is the induced drag calculated for a wing with elliptical planform?
5
What are the factors required to estimate the minimum required power for an experimental aircraft of a specific mass?
6
What is the formula for induced drag?
6
What is the relation between drag and weight?
1
For subsonic aircraft, would adopting a higher wing loading decrease drag?
1
Does an airfoil drag coefficient takes parasite drag into account?

8
Is the low air pressure on top of the wing the major contributor to lift?
2
How to calculate aileron deflection for achieving similar roll dynamics at thin and dense air?
17
Why is max endurance different for jet and props?
95
Are wings any more efficient at creating lift, versus orienting the engine's thrust downwards?
1
How much force is produced by control surfaces?
1
Was the Coanda effect known in 1868 to Matthew Piers Watt Boulton (the one who described the first ailerons)?
1
How do power and thrust curves compare?