Do airplanes need brakes in the air? 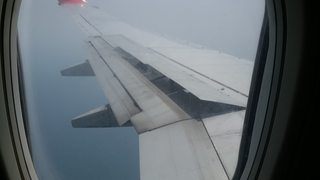 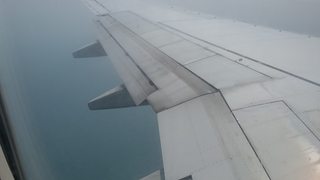 A few days ago I flew on a Boeing 737-900ER. Luckily I was sitting just beside the left wing, seat 26B. I observed that the spoilers were activated (opened) just after the pilot spoke on the Passenger Address System announcing that the airplane was preparing for landing (if I was not mistaken) and began to descend. The spoilers then opened for around 3-5 minutes (picture 1) and then closed again (picture 2) until it touched down. In flight they were not as fully activated/opened as when the airplane landed.

What you saw is called a speed brake, which is one of the functions of the spoilers. From the Boeing 737 NG FCOMv2 (9.20.5 Flight Controls - System Description):

Four flight spoilers are located on the upper surface of each wing. Each hydraulic system, A and B, is dedicated to a different set of spoiler pairs to provide isolation and maintain symmetric operation in the event of hydraulic system failure. Hydraulic pressure shutoff valves are controlled by the two flight SPOILER switches.

Flight spoiler panels are used as speed brakes to increase drag and reduce lift, both in flight and on the ground. The flight spoilers also supplement roll control in response to control wheel commands. A spoiler mixer, connected to the aileron cable-drive, controls the hydraulic power control units on each spoiler panel to provide spoiler movement proportional to aileron movement.

The flight spoilers rise on the wing with up aileron and remain faired on the wing with down aileron. When the control wheel is displaced more than approximately 10°, spoiler deflection is initiated.

The speed brakes consist of flight spoilers and ground spoilers. Hydraulic system A powers all four ground spoilers, two on the upper surface of each wing. The SPEED BRAKE lever controls the spoilers. When the SPEED BRAKE lever is actuated all the spoilers extend when the airplane is on the ground and only the flight spoilers extend when the airplane is in the air.

You noticed that the spoilers did not extend as much in the air as on the ground. This is intentional to reduce buffeting:

Operating the SPEED BRAKE lever in flight causes all flight spoiler panels to rise symmetrically to act as speed brakes. Caution should be exercised when deploying flight spoilers during a turn, as they greatly increase roll rate. When the speed brakes are in an intermediate position roll rates increase significantly. Moving the SPEED BRAKE lever beyond the FLIGHT DETENT causes buffeting and is prohibited in flight.

The speed brake lever must not be moved above the FLIGHT DETENT while in the air. You can see it in the following image from the FCOM:

If it is brake, do an airplane need brake in the air?

Yes, sometimes. Ideally a flight profile is calculated that does not require the use of brakes in the air. That means the Flight Management Computer (FMC) calculates a so called Top of Descent point at which you can start an idle descent. So the engines are retarded to idle thrust and the aircraft maintains the target speed by descending. This will get you on final approach at the desired altitude. Two things can happen now:

If it is brake, is not more efficient to reduce the engine's power rather than to keep it constant power but brake to make it slower?

The engine will already be reduced to idle on a normal descent profile. Therefore using less power is not an option any more. Use of reverse in flight is usually prohibited for most aircraft, e.g. 737 FCOM:

Though your photos refer to a specific commercial airliner, your question is general, so I will describe a more specialized use case for speed brakes. A glider (also known as a sailplane) has no engine, and it is designed to have a very high glide ratio so that it can travel further between sources of lift. If a glider were to come in for a landing without using speed brakes, it would descend at a very shallow angle, starting far from the airport. A long, shallow approach is dangerous because the aircraft will be too close to the ground far away from the airport; also, lacking an engine, the glider has no ability to increase its speed and altitude simultaneously to avoid an obstacle. Further, when starting at a long distance from the airport and a low altitude, it would be virtually impossible for a pilot to judge the correct glide path to land at the desired point. Gliders deploy speed brakes or spoilers to enable a steeper glide path during the final approach. If an emergency occurs, such as a last-minute obstruction on the runway, the glider pilot may retract the brakes to gain speed or altitude, to gain additional time on approach.

As you can see on the photo, the flaps are slightly extended, allowing the aircraft to fly at a lower airspeed. This is common for aircraft to do during an approach, to keep a constant distant between incoming flights. An aircraft flying into an airport, can perform a continuous descent or a step down decent. Illustrated in the figure below:

From the figure it is seen that the for the step down approach, the aircraft needs to move relatively quickly from one flight level to the other. The pilot can do two things to achieve this, put the nose down, increasing airspeed and giving passengers a rollercoaster ride! Or, the other option would be to temporary reduce the lift of the wings without affecting the airspeed that much in order to keep a given separation between consecutive flights.

The spoilers on the wing you see deployed are also called lift-dumpers and are used to, while being extended, reduce the lift of the wing and thus have the aircraft "falling" out of the sky in a controlled fashion. They also reduce the airspeed of the aircraft due to increased drag, thus often as the spoilers are retracted again you notice the pilots increasing the throttle. In short, the lift dumper are used to move to a lower flight level in a controlled fashion without the need to push the nose down.

Yes, deploying the speedbrakes makes for a steeper descent - can be seen quite often.

Yes, those are speed brakes, used to slow the aircraft down. In this case, they also double as spoilers to kill lift once the aircraft has touched down.

A propeller aircraft can be slowed down while in flight by throttling down and in some cases flattening the pitch on the prop blades... this created a lot of air resistance and slows the aircraft.

When turbine engines, both turbojet and turbofan, were developed for aircraft use, one drawback was that they offered no in flight braking ability like prop aircraft have. No big propeller to create air resistance when the prop is slowed down and/or the pitch is flattened.

That is why the aircraft you were on didn't reduce speed by cutting power... it would have almost no effect on the aircraft's immediate speed. Also, when approaching a field for landing, the aircraft is descending and tends to pick up speed, so the speed brakes are used to keep the aircraft's speed within what is desirable for a landing approach.

Imagine trying to turn off of a downhill highway into a parking lot with no brakes on your car, and you can see how this lack of immediate braking ability could be a problem, especially when approaching an airfield.

So, speed brakes, flaps that would open up to create air resistance, were developed for jet aircraft, so that they could slow down quickly when needed.

The spoilers decrease the wing's lift coefficient. Yet in the context of flight, as opposed to the context of after touchdown, it's not really correct to imagine that they are forcing the wing to generate less lift. In a steady-state descent, lift is only slightly less than weight, unless we are talking about a really extreme dive angle. So what the "lift dumpers" are really doing is allowing the plane to fly at a higher angle-of-attack and thus make more drag for any given airspeed than would normally be the case. Also, the devices generate drag for other obvious reasons, independent of the increased angle-of-attack of the wing. The two effects in combination are what allow the plane to descend at a steeper glide angle than would otherwise be the case at the same airspeed and power setting. Or conversely, we could say the two effects in combination are what allow the airspeed to be lower than it otherwise would be at the same glide angle and power setting.

To really start to come to an understanding of this apparent paradox, you'll need to look at how each device modifies the curve of L/D versus airspeed, which is also essentially a curve of sink rate versus airspeed. But that's probably more than you wanted to know!

24
Why don't flights fly towards their landing approach path sooner?

27
What is the maximum safe bank angle of a 747?
10
What are the differences between air brakes, spoilers and lift dumpers?
17
Why is max endurance different for jet and props?
11
Why do some aircraft (e.g. Avro RJ85) have rear-mounted air brakes?
7
Why is deploying speed brakes not recommended with the flaps extended?
4
Engines more powerful than the brakes?
14
Why does spoiler extension cause straight-wing Learjets to pitch down, rather than up, and why did it take so long to discover this?
2
Why does IAS decrease with lower air density if power is constant?
4
How can speed brakes level a plane?