Why does spin recovery involve cutting the throttle?

When recovering from a spin, the first step is generally to cut the throttle:

... Otherwise, to recover from an upright spin, the following generic procedure may be used: Power is first reduced to idle and the ailerons are neutralized. Then, full opposite rudder (that is, against the yaw) is added and held to counteract the spin rotation, and the elevator control is moved briskly forward to reduce the angle of attack below the critical angle. Depending on the airplane and type of spin, the elevator action could be a minimal input before rotation ceases, or in other cases the pilot may have to move the elevator control to its full forward position to effect recovery from the upright spin. Once the rotation has stopped, the rudder must be neutralized and the airplane returned to level flight. This procedure is sometimes called PARE, for Power idle, Ailerons neutral, Rudder opposite the spin and held, and Elevator through neutral. ... [Wikipedia]

This is extremely counterintuitive; given that another vital step in spin recovery is to apply full down elevator1 to get the nose down, one would expect that the blowback from the engine (especially for tractor-propeller aircraft) would aid in recovery by striking the underside2 of the deflected elevator, and, thereby, pushing the tail up (and the nose down), making it seem, at first glance, that it would be best to firewall the throttle in order to get the tail up and the nose down as quickly as possible.

In addition, even without the contribution from the elevator, applying full throttle would:

Both of these effects would tend to destall the aircraft and transform the spin into a boring old trivial-to-recover-from spiral dive.

So why do spin-recovery procedures for most aircraft generally call for cutting the throttle, rather than firewalling it?

1: Or, if spinning while inverted, full up elevator.

2: Replace "underside" with "upper side" if spinning inverted.

Applying engine power can indeed help to end a spin. But the added thrust will make an overspeed in the ensuing spin recovery much more likely. Also, applying asymmetric thrust on the wrong side will flatten and stabilize a spin. These are the main reasons why the engine should be idle in spin recoveries.

Remember the Boeing 307? The first passenger airliner with a pressurized cabin and the civilian version of the B-17. It was test-flown by KLM personell on March 18, 1939. It entered a spin after a stall and the rudder became stuck in spin direction. The pilot applied asymmetric power in order to stop the yawing motion and succeeded in doing so, but in the subsequent recovery the aircraft oversped and the outer wings broke off. Here is the official accident report. 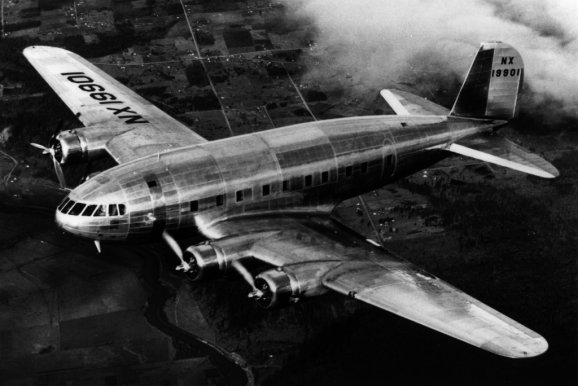 Boeing 307 in flight (picture source). Note the small fixed vertical surface which was replaced after the crash with a much bigger one.

Symmetrical thrust can be helpful or adverse for spin recovery, depending on circumstances. NASA TN D-6575 from December 1971 says that

The effect of applying symmetrical power in a spin is believed to be insignificant. A number of varied observations have been made through the years by many people, and the conclusions regarding power effects on spins range from favorable to adverse. […] In almost all cases, the results were not obtained under controlled conditions. Therefore, the type of spin, the center of gravity, the angle of attack, the spin rate, and the line of thrust with respect to the center of gravity were not identified.

Therefore, a general recommendation for applying symmetric thrust for spin recovery cannot be made and only asymmetric thrust has shown to be helpful if applied correctly:

the application of thrust had no effect unless the thrust axis was displaced from the center of gravity and thereby produced a moment.

For asymmetric power for a twin-engine configuration with the engines mounted on the wings, power from only one engine can produce a large asymmetric yawing moment, which will be favorable or adverse to the spin and recovery, depending on the direction of the moment. Both model and full-scale spin-test results of multiengine airplane designs have shown that power on the outboard engine (e.g., the right engine in a left spin) can create a large prospin yawing moment, which can cause a flatter and faster spin. On the other hand, power on the inboard engine can create an antispin moment to aid spin recovery. Normally, the manipulation of thrust can be confusing and disastrous if the power is applied to the wrong engine. Therefore, unless asymmetric power is necessary to aid recovery, it is generally recommended that for a multiengine airplane, the throttle be retarded to the idle position on all engines during a spin.

It should also be mentioned that the extreme angle of attack at the inboard engine will produce an extreme sideways displacement of the thrust vector on a propeller or uneven flow in a jet intake. In both cases such a flow condition was most likely not anticipated during design and could result in the loss of the propeller rsp. a compressor stall in the jet engine if full thrust is applied.

While I do not know of a propeller having been lost in a spin, during the flight test of the Dornier 328 an extreme sideslip did indeed overload the left propeller, parts of which tore a massive hole into the fuselage.

P factor, which may help or hinder depending on the direction of rotation.

Propeller wash may tend to help unstall the wing root a bit, but the rotational force is coming from the unstalled wing driving forward and the stalled wing at the other end holding back, so blasting air over the wing roots may not have much effect.

The axis of rotation is somewhere around the inboard end of the stalled wing, not in the center of the fuselage, so that the thrust, instead of pulling the airplane straight, is just applying a torque that assists the unstalled wing in the rotation. Adding power may just speed up the rotation.

Lots of airplanes have different spin characteristics power on and power on, and left to right, especially with power on, and it's better to just remove the propeller's influence completely to allow a consistent technique to be used.

When pilots get into spins and the normal inputs don't help, that's when they start to experiment with different control inputs and power. Sometimes works and sometimes doesn't.

The vast majority of light aircraft recover by themselves if you just let go of everything within the 1st turn or so. Even airplanes that are not certified to spin will generally auto-recover unless they are held in the spin for an extended period.

Adding power can tend to make the spin go flat in some aircraft.

Yet in some cases, adding power can aid spin recovery, especially in a flat spin.

I've owned a radio-controlled model airplane that would enter a really nice flat spin, with the fuselage nearly horizontal and a rather substantial yaw rotation rate. In fact, once I figured out the best technique to enter the flat spin (which involved carrying about half power into the entry), I could get consistent entries to flat spins at CG locations that were too far forward to consistently enter a nose-down spin.

Once established in a flat spin, the plane would consistently recover if I gave it lots of power and kept the controls neutralized. On the other hand, leaving the power off and giving full down elevator and full anti-spin rudder would never stop the flat spin. Holding full down elevator at the same time I applied full power would tend to cause the flight path to pitch down toward vertical or beyond during the recovery, so I soon decided that wasn't a good idea at low altitude.

At least one crash was caused by climbing so high that the battery was essentially drained and then kicking the model into a flat spin. When the ground started approaching, I advanced the throttle to recover, but the battery didn't have enough power left to run the motor at all, so the flat spin continued to the ground.

The model happened to be a loose semi-scale model of a Piper Cub. To be specific, it was the "Hobby Zone Super Cub S" or "LP" (essentially same the same aircraft). No suggestion is intended here that a full-scale Super Cub or Piper Cub would behave the same way.

The model was set up with fairly modest control throws, and the story might have been different had they been larger, but at any rate they were large enough to enter a flat spin that could not be recovered from without adding power. I usually used some power for the spin entry, but it was possible to enter without power as well, though not completely consistently.

Changing the wing from the stock wing with dihedral and no ailerons to a modified wing with no dihedral and with ailerons didn't fundamentally change the spin recovery characteristics, at least if I left the ailerons centered. (Notes on how the ailerons could be used to effect recovery from a flat spin without adding power are given here at this related ASE answer.)

In reference to a comment-- at the CG used to demonstrate intentional flat spins, the plane was definitely statically stable in pitch when trimmed for a wings-level glide near the minimum sink rate speed, though perhaps not by a large margin.

The take home lesson is -- when it comes to spins, your mileage may vary. Never assume that spin characteristics will be similar from one airplane type to the next, or even from one example of a particular aircraft to the next.

Not the answer you're looking for? Browse other questions tagged emergency-procedures throttle spins or ask your own question.

43
Is it possible to recover from a flat spin?

23
Is spin recovery possible in an airliner?
10
What is the Beggs/Mueller emergency spin recovery technique?
14
How do the Tiger Moth's anti-spin strakes work?
10
How to enter an inverted spin?
17
Does it really take 9000 feet to recover from a spin in a P-51 Mustang?
3
During spin recovery, can you just release the yoke/stick to neutralize the ailerons?
6
Does a left spin differ from a right spin for a single-engine propeller aircraft, in terms of spin characteristics & ease of recovery?
5
Why don't multiengine aircraft have to demonstrate spin recoverability?
6
Should I use rudder to recover from power-on stalls?