What is nominal n1 and fuel flow behavior during cruise climb?

For a commuter airliner (e.g. 737) performing a cruise climb (step climb) at a constant Mach, how should n1 and fuel flow behave?

Yes, the lighter you are the less N1 you need to maintain the cruise Mach at your cruise altitude. This will result in a lower fuel flow (at fixed environmental conditions, lower N1 always results in lower fuel flow). The maximum climb N1 is however independent of weight (see below for details), therefore also fuel flow will be independent of weight during climb (but the resulting climb rate is different).

The cruise N1 depends on both weight and altitude. The following table from the 737 NG QRH (Performance Inflight - Flight With Unreliable Airspeed) shows the target N1 values for various weights and altitudes:

As you can see, N1 goes up with weight and up with altitude. The maximum climb N1 has a more complicated behavior as function of altitude, as the following table from the 737 FCOMv1 (Performance Inflight - General) shows: 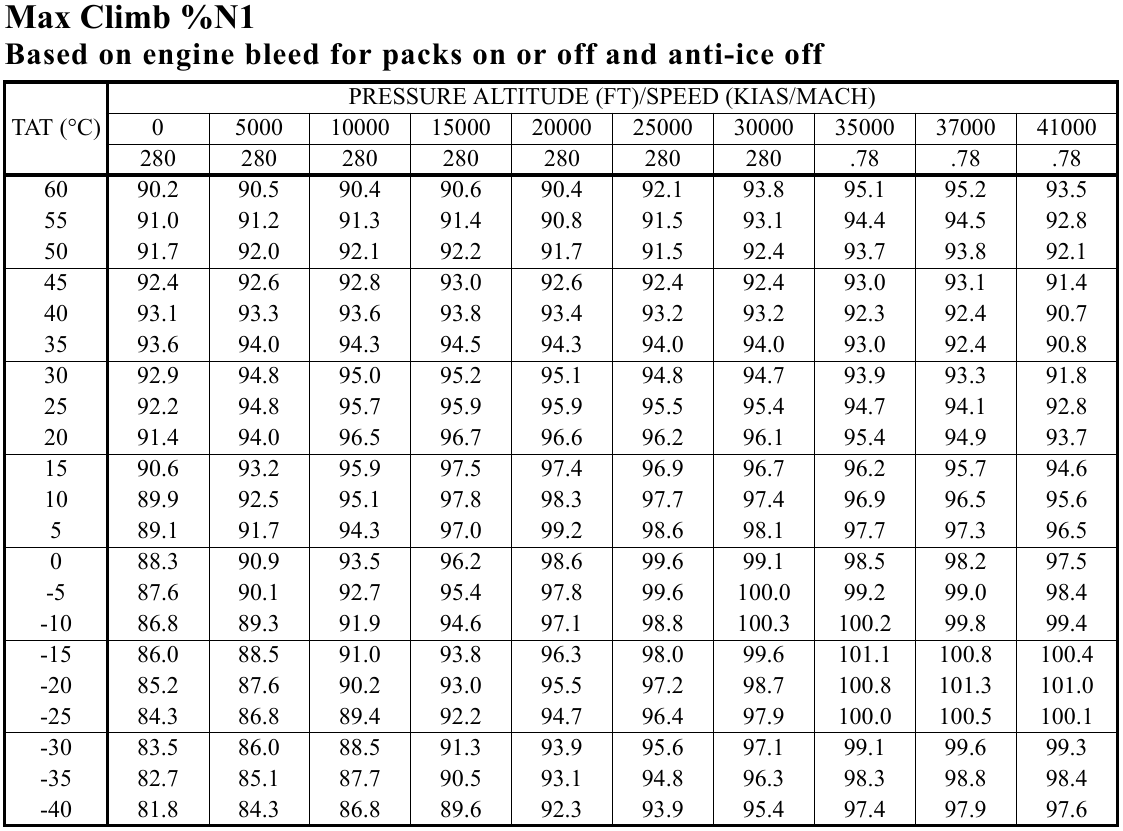 The last 3 columns all show climb at fixed Mach 0.78. The N1 usually goes up with altitude, but then slightly down again for the highest altitudes (this is because TAT goes down with altitude up to the tropopause, but stays constant above). The maximum climb N1 is independent of weight, but the actual weight will affect the resulting climb rate.

For the Boeing 737, the required fuel flow to reach the target N1 is computed by the EEC (Electronic Engine Control, see also What are the differences between FADEC and EEC systems?). From the 737 NG FCOMv2 (7.20.5 Engine System Description):

Each engine has a full authority digital EEC. Each EEC has two independent control channels, with automatic channel transfer if the operating channel fails. With each engine start or start attempt, the EEC alternates between control channels. The EEC uses thrust lever inputs to automatically control forward and reverse thrust. N1 is used by the EEC to set thrust in two control modes: normal and alternate. Manual selection of the control mode can be made with the EEC switches on engine panel.

Normally, N1 limits are automatically specified. Pilot selection of other limits is allowed.

Pilot selection of a reduced climb mode does not change the automatic selection for other phases of flight.

Pilot selected mode is automatically replaced by AUTO selection when the autopilot next changes vertical mode.

The active thrust limit is used by the autopilot and is displayed on the thrust mode display.

Not the answer you're looking for? Browse other questions tagged engine fuel cruise or ask your own question.

3
What are the differences between FADEC and EEC systems?

33
Why do airliners pitch up during cruise?
1
Why would the fuel pressure decrease during a climb?
42
How can an altimetry system error during cruise (500 ft at 35000 ft high) cause an insufficient fuel situation?
2
What is the Fuel-Oxygen ratio for a large turbofan at cruise conditions?
4
What is the throttle setting of a piston aircraft during cruise?
1
What is the relationship between EGT, Fuel Flow, N1, N2 and Air Temperature?
7
Based on this fuel flow chart, why isn't it more optimum to remain at an intermediate altitude rather than climbing?
1
How much thrust is produced on an A320 at takeoff and during cruise?