How can an helicopter end up with the same tail number than an airplane?

https://www.jetphotos.com/registration/N133AA shows American Airlines photos from the 90s and an helicopter from this decade: 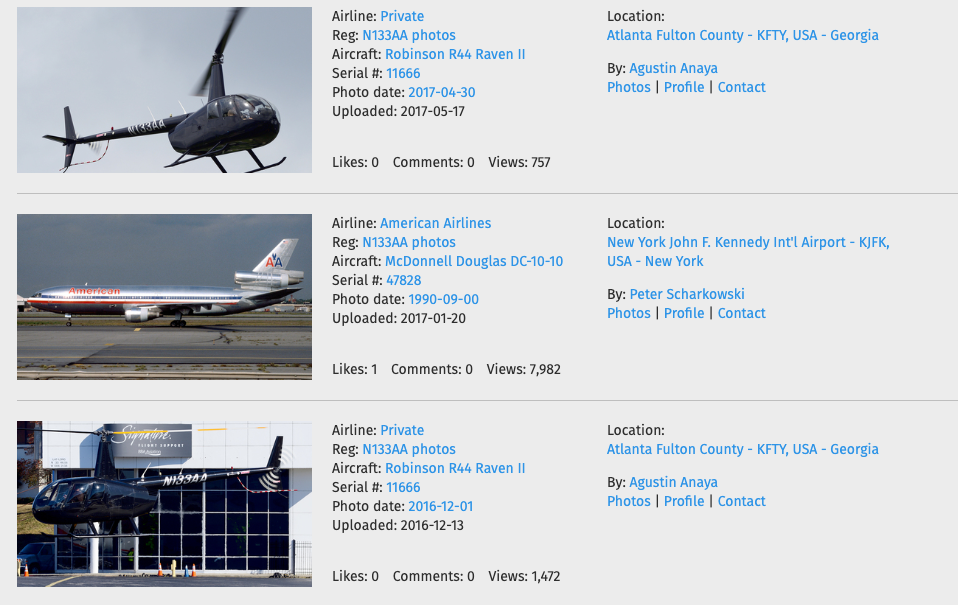 The FAA only shows the helicopter registry:

Transtats shows that the last time N133AA flew from LA to NY was in 2008, and I'd bet that was not the helicopter.

Is it normal that tail numbers get reused? How can I make my cross-searches reliable?

Wind the clock forward 15 years and somebody has used N133AA for a Robinson R44 helicopter. I speculate that the effective owner of the helicopter is one Agustin Anaya, who submitted the photographs to JetPhotos, even though the aircraft is registered to a company.

The FAA registry shows only the helicopter because the American Airlines usage was released long ago.

Not the answer you're looking for? Browse other questions tagged aircraft-identification faa aircraft-registration or ask your own question.

3
Different planes with same registration? How is it possible?

8
Can you re-register a de-registered aircraft with the same N-number?
14
Should an aircraft's registration match with its tail number?
12
Can you help me identifying this circa 1910 airplane with tail number 72?
15
How to determine the aircraft tail number on a particular flight?
2
What’s the difference between a tail number and a Manufacturer's Serial Number?
0
Why is the N-number on the tail of aircraft sometimes shown in both large and small font?
5
Why can't I find a tail number in the FAA registry?
2
How can I acquire an N number that's showing as deregistered?
3
Different planes with same registration? How is it possible?