What is the purpose of the propeller?

The propeller generates thrust, but what is the purpose of thrust of propeller? Is it to help the aircraft move forward or to produce lift to rise up?

Drag is created by both the forward velocity of the plane through air (parasite drag) and as a byproduct of lift (induced drag).

Lift is a also a consequence of movement through air and is used to counter weight.

The above is mostly true for conventional, heavier than air, fixed wing aircraft in un-accelerated flight. More complex cases like VTOL aircraft use thrust to directly counter weigh during some stages of flight. 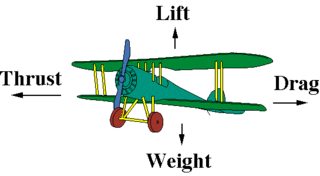 A fixed-wing aircraft generates forward thrust when air is pushed in the direction opposite to flight. This can be done in several ways including by the spinning blades of a propeller, or a rotating fan pushing air out from the back of a jet engine, or by ejecting hot gases from a rocket engine. The forward thrust is proportional to the mass of the airstream multiplied by the difference in velocity of the airstream. Reverse thrust can be generated to aid braking after landing by reversing the pitch of variable-pitch propeller blades, or using a thrust reverser on a jet engine. Rotary wing aircraft and thrust vectoring V/STOL aircraft use engine thrust to support the weight of the aircraft, and vector sum of this thrust fore and aft to control forward speed.

So the primary purpose of a propeller is to keep the airplane moving forward.

The propeller generates thrust, but what is the purpose of thrust of propeller? Is it to help the aircraft move forward or to produce lift to rise up?

Your question though very simple opens the door to thinking about what is meant by words like "purpose" and "cause" in the context of physical forces. All the forces at play in a given physical situation (e.g. a linear climb at constant airspeed) can in some sense said to be helping to "cause" that situation.

Yet in another sense, though lift is always present in a climb (other than a purely vertical one), it is not really the the "cause" of the climb. Read on for more--

A propeller's thrust exerts a forward force on the aircraft, acting mainly in the opposite direction as the drag vector. Yet even if no thrust is present, an aircraft can maintain airspeed just fine (at least up to its terminal velocity) by using gravity to offset drag. This means that the flight path must be descending, at least in relation to the airmass. An aircraft flying without any thrust can't maintain altitude or climb, at least not without trading off some airspeed, assuming no updraft is present in the airmass. So thrust is always needed for sustained horizontal or climbing flight in non-rising air.

One misconception that may be embedded in your question is a hint of an idea that we may need more lift to climb than to fly level or descend. Actually, lift is important regardless of whether we are gliding downward, flying horizontally, or climbing upward. A climb does not require more lift than level flight. It's just more complicated to generate lift when we are climbing or flying level than when we are descending, because it's harder to sustain the required forward motion, because we aren't getting any help from gravity. Hence the need for thrust. So your intuition that a propeller has something to do with generating lift to allow climbing flight has some truth to it, but not because we need any more lift to climb than to fly horizontally or to descend.

Some of these things were said in a simpler way in another good answer to your question: What is the purpose of the propeller? .

If you want to ask "what happens if the propeller falls off", (ignoring the resulting CG shift), then the answer depends on what constraint we apply.

Is the flight path constrained to be horizontal or climbing? Then the airspeed will decrease until the stall speed (stall angle-of-attack) is reached.

Or is the airspeed constrained to be constant? Then the aircraft will start to descend.

Or is the wing's angle-of-attack constrained to be constant? Then the aircraft will start to lose airspeed, the flight path will curve downward, the aircraft will go through several cycles of a pitch "phugoid" oscillation, and the aircraft will finally stabilize in a descending glide at a slightly lower airspeed than it had in powered level flight.

The pilot's control inputs will determine which of these cases apply, or some other case that is a hybrid of two or more of them.

The ultimate answer to your question, which appears to be essentially "what is the effect of thrust", ultimately lies in an understanding of the vector diagrams showing the forces acting on an aircraft in various situations. Such a diagram will give a better answer than any number of words.

So you may want to learn how to draw the force vector diagrams that apply for unpowered gliding flight, powered horizontal flight, and powered climbing flight. These related answers may help:

John S Denker's "See How It Flies" website ( https://www.av8n.com/how/ ) is great resource for anyone wanting to gain a detailed understand of the physics of flight. However it is aimed at people that already have some understanding of flying on the practical level, so it may not be the best resource for a complete beginner. This is the section that addresses the balance of forces in level flight, gliding flight, and climbing flight: https://www.av8n.com/how/htm/4forces.html#sec-four-forces . Note that Denker has not made the simplifying assumption used in the other links and comments above, that thrust acts parallel to the flight path through the airmass.

(It appears possible that you may simply be asking a question about which direction the propeller's force vector points in various modes of flight. If so, that could be better addressed with a different and more specific question. While thrust is not always defined as acting purely opposite to drag, as a rule of thumb the direction of the force from the propeller does act mainly parallel (and opposite) to the drag vector, with only a small component acting parallel to the lift vector. Bear in mind that sometimes engines are mounted with a small amount of down-thrust, so in high-speed cruising flight a propeller's force might actually include a very small component acting opposite to the direction of the wing's lift vector.)

Not the answer you're looking for? Browse other questions tagged propeller lift or ask your own question.

22
Does lift equal weight in a climb?
14
How does an aircraft descend without its nose pointing down?
7
'Gravitational' power vs. engine power
3
What produces thrust along the line of flight in a glider?

7
How do the blades on a propeller generate thrust?
4
Why doesn't the plane accelerate/move forward when it's at rest, if the propeller is spinning?
0
Does the direction of rotation of the propeller affect the direction of the thrust generated?
2
Will creating a strong back pressure within a ducted propeller enable an aircraft to attain a higher altitude?
0
How does 'standalone' propeller efficiency change with altitude?
12
Could propeller wash provide sufficient lift to take off - even in theory?
1
For a same propeller solidity, what are the tradeoffs between blade activity factor and blade number?