Why does lift curve slope increase when Fowler Flaps are deployed?

Below is an image for a Fowler Flap:

Notice that as the flap is deployed, both the camber and the area increase. This change in wing shape modifies the lift curve as follows: 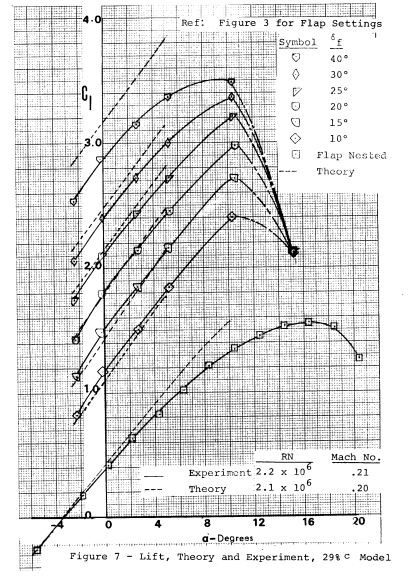 This behavior can be isolated and viewed in the simpler figure below: 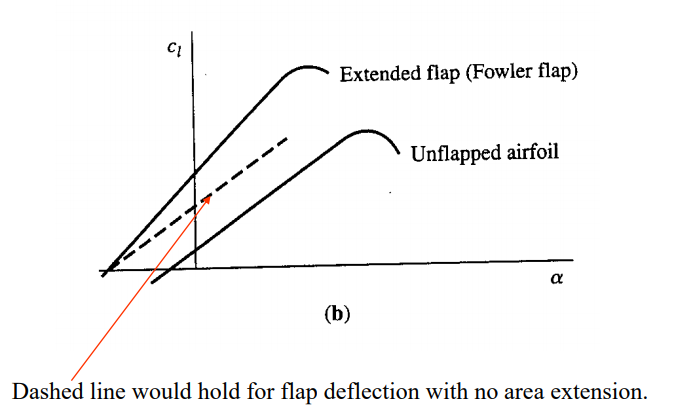 Note that the lift curve slope has increased.

So where in my analysis do I go wrong? I know the lift curve slope should increase, then why does my analysis indicate otherwise?

Note that your plots show lift coefficient over angle of attack. This lift coefficient is referenced to a reference area which must be defined somehow. It is customary to use the projection of the clean wing area in the x-y plane for all flap settings in order to keep coefficients comparable. The lift curve slope increases because the real wing area increases while the reference area remains unchanged. The dashed line in the lower plot shows the isolated effect of camber increase while the upper solid line combines both effects (area and camber increase).

Not the answer you're looking for? Browse other questions tagged aerodynamics aircraft-performance aircraft-physics flaps or ask your own question.

4
How does the aspect ratio of a wing impact its lift?
3
Deployment of leading or trailing edge flaps - increase or decrease the angle of attack and critical angle of attack?

7
What is the working principle of a Gurney Flap?
4
Where can I find pictures of "endplate"?
6
Why does the A320’s maximum allowable aileron deflection decrease, rather than increase, when the flaps are extended?
1
What is the name for a flap that increases the wing's area but not its camber?
11
Why are Krueger flaps called flaps and not slats?
3
Why did this delta wing generate a lower Cl at a higher wind tunnel velocity?
0
New Research: VGs increase lift to drag ratio up to 880%. Does it work for flaps too?
0
Design lift coefficient of an airfoil
2
Why does pitching moment coefficient decrease with an increase in the angle of attack?
2
Would plain and slotted flaps increase lift substantially in a distributed propulsion application?