Can an F-16 land on an aircraft carrier, at all?

Looking at the F-16 again, I noticed the tailhook which it seems to have. I know the F-16 is not designed to land on any aircraft carrier, however, if it was between ditching in the ocean and attempting to land on a carrier. During wartime or any emergency; if the F-16 found itself over an ocean and needed to land, and there was a friendly carrier nearby. Could it be done?

For this we assume an unmodified F-16, any of the F-16 variants are candidates for this thought experiment. However, I assume the lighter F-16A (I assume they all have the hook, even the early block A variants?) is better, since it has less mass which needs to come to a full stop?

I understand that this will probably be speculation at best, I'm just curious. Forgive me. If someone happens to know the figures of maximum load on the F-16 tail hook versus what would roughly be required, that would be awesome. However, I'm also taking just educated guesses.

My own layman efforts towards an answer, limited to mostly just identifying some obvious issues:

Is the F-16 tail hook even compatible with the arrest system an aircraft carrier uses? Perhaps it wouldn't catch the arrestor cable at all.

If it does catch it, perhaps it is not designed for that kind of abuse, and would tear straight off the airframe if this was attempted.

For carrier landings, the aircraft will typically from what I understand not flare and make hard landings which really beats the undercarriage. I'm not so concerned with the undercarriage breaking, it would be better to recover an F-16 with broken undercarriage than losing it to the ocean.

However, if the undercarriage does break, it might prevent the hook from catching the cable at the correct angle. Even if it does grab the cable, perhaps the aircraft with broken undercarriage would risk sliding off the side of the deck.

From what I understand, there are no barriers on modern Nimitz carriers any longer. Hence they will not be considered as an option. Perhaps a barrier could catch an F-16 but I'm more curious about the properties of the hook, undercarriage, and other issues with landing on a carrier.

I know landing on a carrier is hard, so what is it that makes it so hard for an F-16? 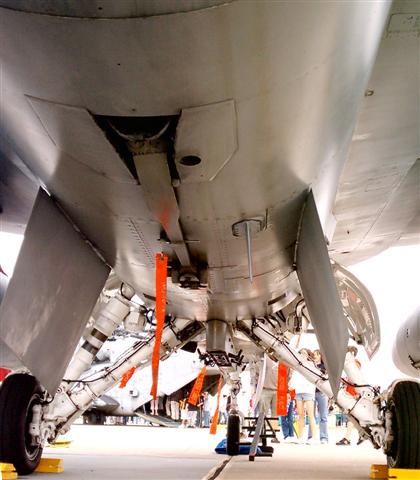 The hook is for emergency use at airports that have Runway Arrestor Systems. Lots of non-naval fighters have arrestor hooks for that purpose.

Now, there is nothing stopping someone from landing an F-16 or any other fighter on a carrier deck and using its arrestor system, which works the same way. The main issues are the proficiency required to do it and the ability of the airframe to take it.

A carrier landing isn't really a landing; you more or less descend into the ocean and the deck gets in the way. So the airplane needs a pilot trained to do that sort of thing, and an airframe that can do it repeatedly, that is, land with a descent rate of >500 fpm, a "hard landing" for a normal airplane, without developing cracks here and there and everywhere after a few dozen times.

No doubt that in theory, you could take a carrier qualified pilot, check him/her out in the F-16, and that pilot could shoot traps onto a deck with the F-16 using the hook (launching it is another matter in the absence of catapult link). But they wouldn't be able to do a lot of them before the airframe would be toast.

Yes the F-16 would be able to land on a carrier however it would most likely break/damage the landing gear and other components because it's not built for it. I am only assuming this, but I believe the net as shown in the picture could catch several non-naval aircraft including a F-16.

No, the F-16 cannot "carrier land", even with the tail hook.

The Air Force jets (aside from any that are shared with the Navy) have tail hooks only for emergency purposes during landing, or securing the aircraft during engine run-up testing. The tail hooks are not designed to arrest an aircraft like it would for a carrier landing, the land-based arresting systems are much gentler on the airframe. The tail hook would get ripped off by the carrier system.

The issue with landing on the carrier is not just the skill, but all the equipment that is on the deck. If they allowed that to happen, they'd have to clear the deck and the only way to do that quickly is to push the aircraft over the side. As far as I can tell, that has only happened once in history.

Something not yet mentioned is that the vertical speed typical of carrier operations is way higher than that for typical F-16 (or any non-naval type) landings.

The landing gear of the F-16 is not designed to handle the resulting loads and would be liable to collapse, it's simply not strong enough.

You can see this easily by comparing the landing gear of an F-16 with that of the similar class F/A-18. Notice how flimsy the F-16's legs look in comparison to those of its naval brother? And how the Hornet has far stronger shock absorbers built into its landing gear than does the F-16?

There was an idea to adapt the F-16 to carrier operations at one point, which would have included a stronger landing gear, stronger main fuselage spar, and other modifications for carrier operations, but the Navy decided the resulting aircraft didn't meet their performance specifications (range, payload, etc.) and opted for the F/A-18 instead.

Some links about the plan:

During wartime or any emergency; if the F-16 found itself over an ocean and needed to land, and there was a friendly carrier nearby. Could it be done?

I'd say yes, using the barricade, one time in extremis. The pilot would have to fly a really flat pass to not knock off the landing gear, but a really good pilot highly motivated to not die flying a good aircraft on a day with a steady deck could do it. He could a few practice runs at it while burning off the rest of his gas.

I'm not sure the carrier Skipper wouldn't recommend he jump out next to the boat, though.

A: the emergency hook on an F-16 is not meant for full speed carrier arrested landings. it' is meant to catch an airfield Arrestor wire after a landing and roll down the runway in event of brake failures. The speed is too high and too violent in a carrier landing and would rip the hook right off.

B: the F-16's landing gear are designed for a smooth flared landing that is typical on a fixed airfield and would collapse under the impact of a carrier landing. Naval aircraft do not flare their landings and instead basically fly into the deck at speed, and then immediately go to full power in case of a bolter (hook skip).

Not the answer you're looking for? Browse other questions tagged landing emergency aircraft-carrier f-16 arrestor-hook or ask your own question.

12
What are the ejection injury and fatality rates?

20
Is is possible to land a midsize commercial plane on an Ford Class aircraft carrier?
15
Why do naval jet aircraft need to have strengthened undercarriages?
9
Why is an aircraft carrier's arresting cable made from steel?
18
Why are these carrier aircraft landing with the canopy open?
2
In the old days, why didn't aircraft use simpler systems to land on a Carrier?
2
How much extra weight is added by strengthening a piston-prop fighter for carrier landings?
22
Why are special aircraft used for the carriers in the United States Navy?
5
Does the F-16 have any armor at all?
37
What do pilots landing on aircraft carriers do when the ship is not visible due to weather?
1
How are carrier landings graded?