How would an aircraft fly PIKES ONE departure procedure of Denver Airport?

I was examining FAA's departure procedures and I noticed PIKES ONE SID (chart and continuation) which serves Denver Airport. 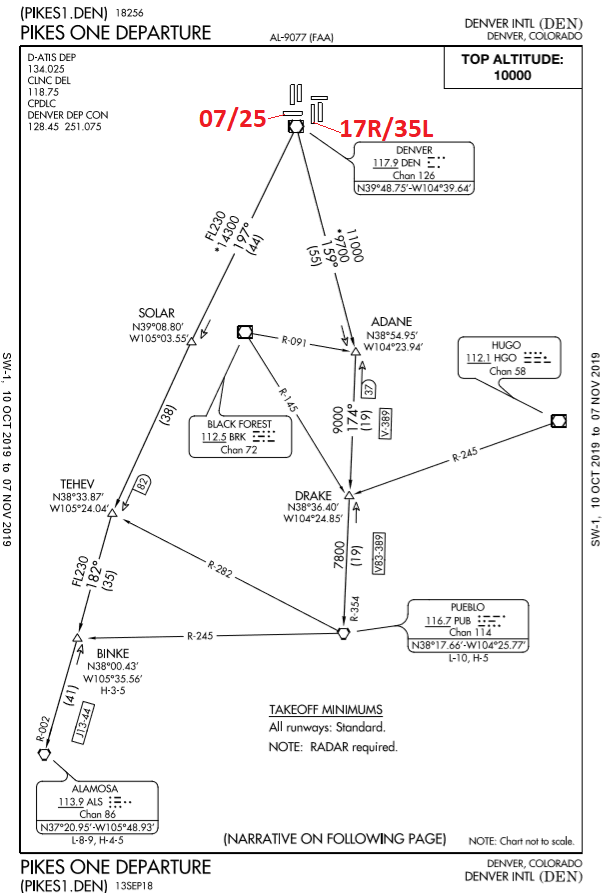 In the description, it states:

What troubles me is that DEN navaid is (obviously) very close to the airport, so I am not sure how an aircraft would depart from the airport via a runway very close to DEN, for example 07/25, and have enough space in order to reach DEN. In addition, based on Lost Communication, an aircraft would climb until 7,000 feet and then go direct to DEN, even if it has already surpassed DEN (by departing, for example, via runway 17R/35L) and theoretically it can just follow the assigned route by skipping this navaid.

In other words, is the aircraft obliged to fly to DEN before following the assigned route under any circumstances and, if yes, what would be a possible flight path in case of a runway that is really close to it?

The essence of this is that on departure, responsibility for navigation rests with the air traffic controllers, not the pilot. The controllers will issue headings and routes to fly in order to keep the aircraft separated from other departures, arrivals, and other traffic. Once clear of traffic, the controller will issue instructions on how and where to rejoin the cleared route. At this point the pilot takes over responsibility for navigation along the cleared route.

Usually, it goes something like this. The departure will be assigned an initial heading, often the runway heading: "runway 17R, fly runway heading, cleared for takeoff." The aircraft flies this assigned heading. The aircraft will then contact the departure controller. The departure controller may continue assigning specific headings in order to separate the aircraft from other departures, arrivals and other traffic. Once clear, the controller has some options. They can clear the aircraft direct to a convenient fix/waypoint or NAVAID on the aircraft's flight plan ("Proceed direct ADANE, resume own navigation") or they can say something like "Fly heading 130, join the Denver 159 radial, resume the departure." It's up to them, but they will issue some kind of instruction that results in the aircraft joining its cleared route.

It is likely that some short amount of time will pass before it is realized that communication has been lost. The aircraft will travel some distance away from the airport during this time. The aircraft must also continue until it reaches 7,000'. So by the time it would become necessary to "proceed direct DEN," the aircraft will not be "right next to it" and a turn direct DEN is reasonable. 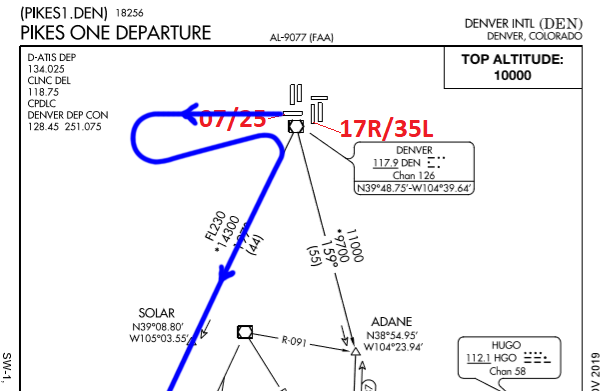