Is there a relationship between transonic buffet magnitude and altitude?

Transonic buffet, or Mach induced buffet, or high speed buffet, is a flow separation due to the combined presence of shockwave and "high" angle of attack. The boundary layer separation results in random high frequency vibrations. As the AOA increases, the separation and the associated vibrations worsen, up to the point where the crew can no longer read the instrumentation and perform normal flight duties; this point is called deterrent buffet.

For a single Mach number, the AOA (or $C_{L}$) associated with buffet onset is generally constant; there will be some differences due to CG position, the associated trim and Reynolds number effects. During aircraft design and flight testing, the buffet onset boundary similar to the one below is mapped out. As you can see, the general trend is a decrease in buffet onset boundary with Mach (though the trend can reverse depending on the airplane). 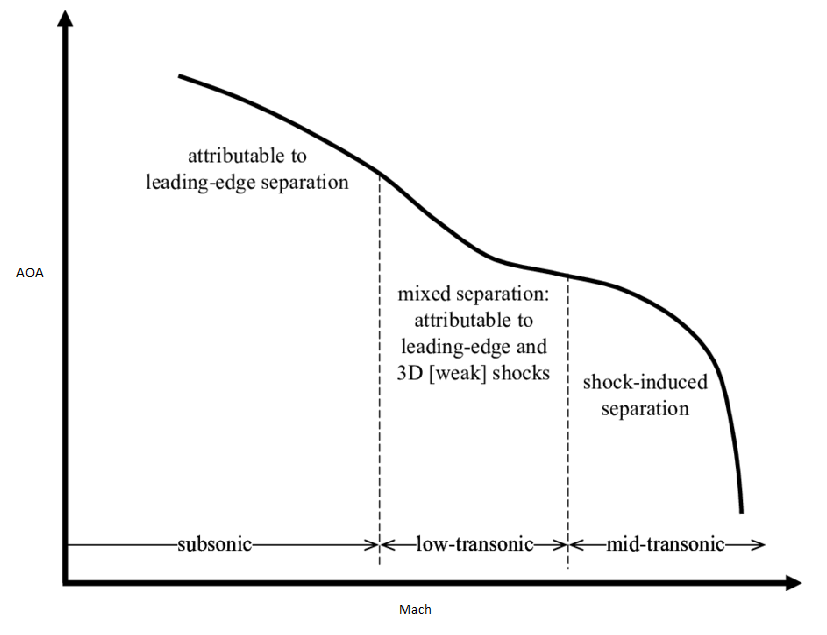 2
What are the speeds for absolute ceiling and coffin corner?
1
Difference between Mach buffet and shock stall

8
Does an increase in air temperature actually improve aircraft performance?
2
How does airfoil thickness affect the Mach number at which it experiences transonic flow?
5
What's the relationship between drag divergence Mach number and maximum operating limit Mach number?
8
Transonic buffet - reason for a rapid movements of the shockwave along the wing chord line?
5
How does maximum speed vary with altitude?
0
What is the relationship between drag and sink rate?
1
Airfoil and Wing Analysis for Transonic Speed (M = 0.85 and Re = 42 million)
2
What's the relation between TAS and Mach in tropopause?
2
Why are true and indicated airspeed different?