Why do wings prefer laminar flow if cd is lower for turbulent flows?

Can anyone please explain to me why we prefer to maintain laminar flow over wings, despite the fact that the overall coefficient of drag appears to reduce as the Reynolds Number increases? I have read that turbulent flows lead to increased skin friction drag, but this is hard to internalize given that the cd is lower overall in turbulent flows for the same angle of attack.

I've been trying to do some research to better understand why aircraft are designed this way, but I haven't had much luck so far. If anyone can offer me some insight here, it would be greatly appreciated!

As an example, I thought it would help to include the drag polar for the NACA 0012, obtained from airfoiltools (http://airfoiltools.com/airfoil/details?airfoil=n0012-il). 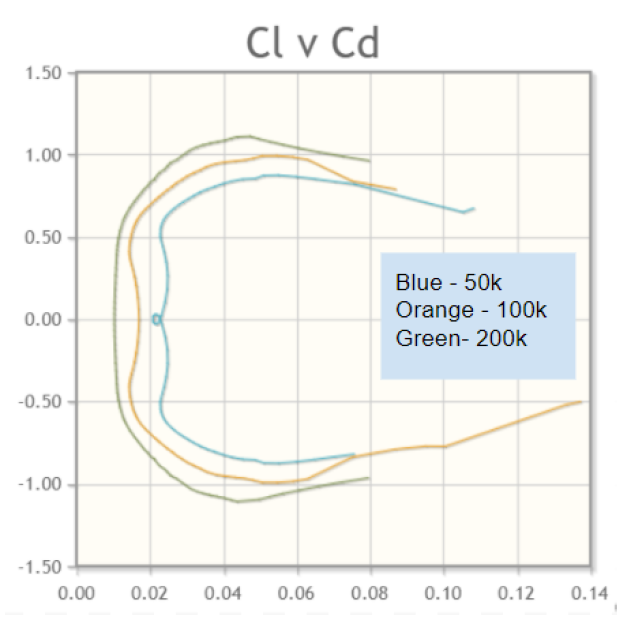 Laminar flow and turbulent flow are not directly linked to Reynolds number, even though Reynolds number is a heuristic indicator of when the flow may transition from laminar to turbulent. However, the transition is actually not well-understood and is difficult to model/predict. That's why you will see cases where, for the same Reynolds number, one flow is laminar and another is turbulent.

Let's take a flat plate for an example. The flat plate boundary layer in laminar flow actually has a closed-form solution; the skin friction drag is given by:

As you can see, as Reynolds number increases, the drag coefficient decreases.

Turbulent flow, on the other hand, has no closed-form solution. An approximation for a smooth plate is given by:

The two lines are plotted in the figure below (cited from this Penn State course, which has a pretty good summary of boundary layer results for flat plate). As you can see, at the same Re, laminar flow has less skin friction drag than the turbulent counterpart. 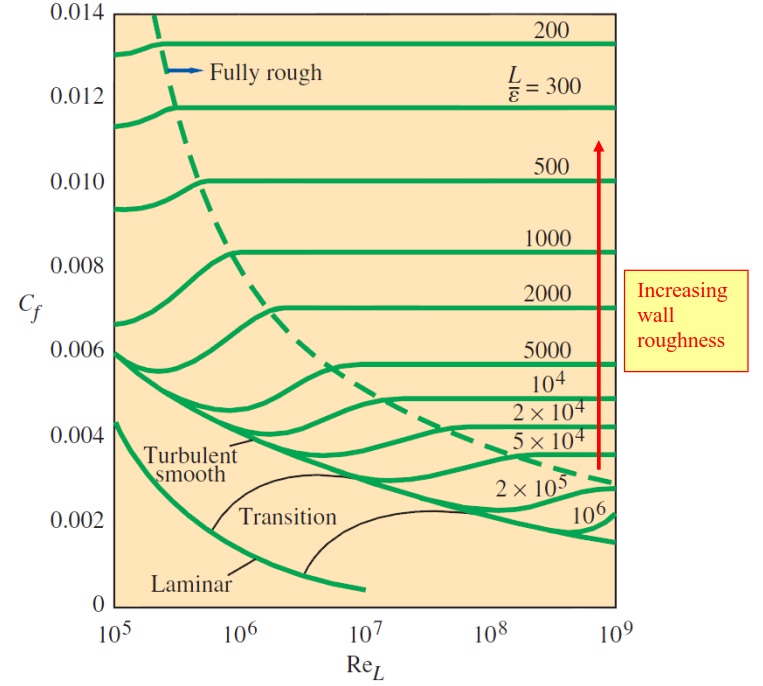 From a skin friction drag perspective, if you can keep the wing in laminar flow, then all the power to you. In practice, however, this is very difficult. Any un-eveness on the wing (e.g. rivets, steps and gaps) could transition it to turbulent flow downstream. Any contamination, such as insects, could potentially ruin it.

Another consideration is whether staying laminar for the whole wing is desirable from a flow separation perspective, since laminar flow separates easier than turbulent flow. There will be a trade-off amongst stall speed, high AOA handling and drag.

Can anyone please explain to me why we prefer to maintain laminar flow over wings, despite the fact that the overall coefficient of drag appears to reduce as the Reynolds Number increases?

The drag coefficient goes indeed down with increasing Reynolds number for both boundary layer conditions, turbulent and laminar flow. Generally, a laminar boundary layer is preferable as long as the flow is accelerated, because viscous drag will be lower, and a turbulent one is better when it is decelerated, so separation can be delayed.

That is correct. In case you wonder why: Shear stress, which is causing friction drag, is proportional to the speed gradient at the wall. The sketch below illustrates the difference (picture source) by plotting flow speed over height of the surface: 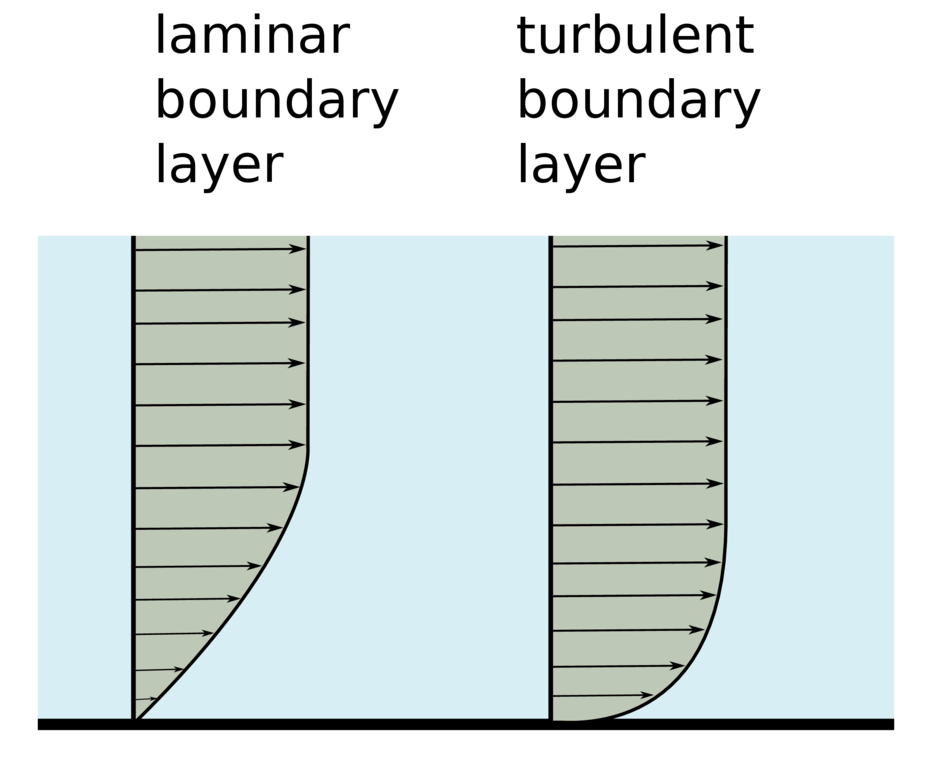 Friction drag over chord for an E502mod airfoil at 3° AoA (own work). Blue: Top surface, Red: Bottom surface. Source: XFOIL 6.97. The transition points are clearly visible: It is where shear shoots up again at mid-chord. Note the separation bubble ahead of the transition point on the bottom side: It is marked by negative values of shear.

Why do wings prefer laminar flow if cd is lower for turbulent flows?

As shown above, it is the opposite: Laminar flow produces less drag than turbulent flow. Exceptions apply.

25
How do insects decrease aircraft performance?
23
Is a golf ball surface a good idea for wings or fuselage?
15
Is airflow ever laminar in the boundary layer, near the wing leading edge?
6
What is a laminar airfoil and what are their pros and cons?
4
What is boundary layer tripping?
5
Why do 20-series Learjets have such an extreme susceptibility to mach tuck?
0
What provides a higher lift to drag ratio, a thick laminar wing or a thinner wing with a vortex generator

2
Where can I find the aerofoil geometry of a commercial aircraft so as to design it in CAD software?
8
Why does a turbulent boundary layer cause more friction drag than a laminar boundary layer?
2
Does turbulent flow encourage/avert flow separation?
1
Turbulent flows over 6 series airfoils
1
Why is it harder to maintain laminar flow on larger aircraft?
0
Can the wing stagnation point be bled off and used for laminar flow control?
13
What is the difference between flow separation and turbulent flow?