When the pilots enter their flight plan into the FMGS, the route will be shown on the ND. Can the autopilot automatically turn when needed with the given plan, or the pilots have to manually adjust the heading everytime? And if possible how do they can manually turn the aircraft within autopilot when needed like: landing, etc.

Generally speaking (not specific to Airbus), what the layman refers to as "autopilot" is actually three logical systems:

Generally, the FMS and FD will be engaged for the entire flight, but the AP is not engaged until after takeoff and is disengaged shortly before landing.

While the flight plan is issued before takeoff, it is frequently amended by ATC during flight. When this happens, the pilot just enters the new data into the FMS and lets the FD and AP adjust as needed.

However, sometimes ATC will issue "vectors" to aircraft, which is an instruction to fly a particular heading or track. To comply, the pilot dials that setting into the FD control knob and changes modes so it follows that manual input instead of the FMS. When ATC puts them back on course, the pilots simply switch the FD back to following the FMS.

Since you tagged airbus, I will answer for the A320. The following image from the FCOM shows the FCU (Flight Control Unit) on the glareshield:

This is where all inputs for the autopilot are made. The second knob is the HDG OR TRK SELECTOR KNOB, which allows setting a heading. In general these knobs work as follows: 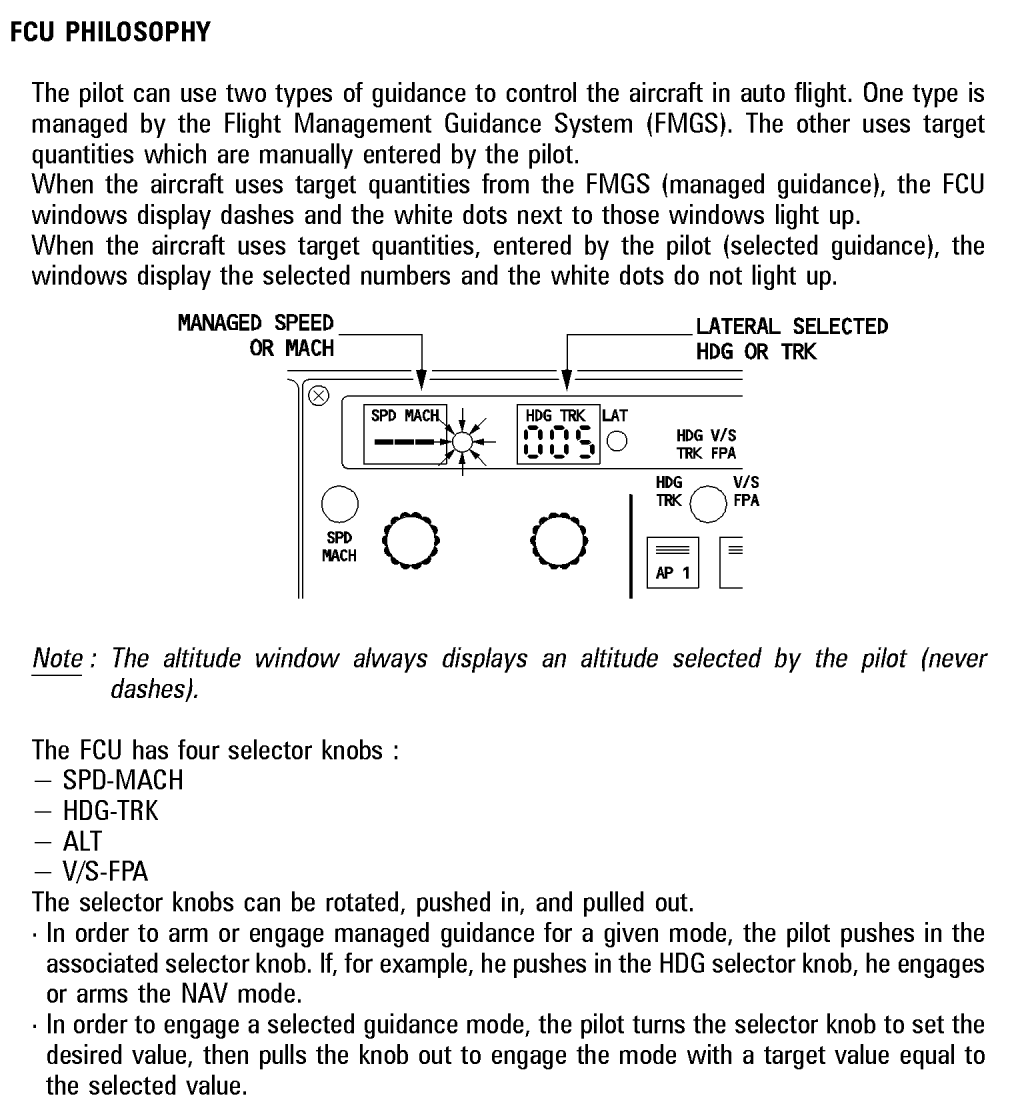 To make the autopilot follow the flight plan from the FMGS, you push the knob in. If you want to manually deviate, you pull the knob out, the dashes will disappear and show a number and you rotate the knob to adjust.

Yes, RNAV autopilots can fly a given route automatically. A pilot can disengage and fly by hand at any time during the flight and the flick of a switch.

Not the answer you're looking for? Browse other questions tagged autopilot airbus or ask your own question.

1
What is that A340 cockpit panel on the glareshield?

6
Can ATC tell if aircraft is being flown manually?
15
What does the Boeing 777 autopilot do after reaching the last programmed waypoint?
24
Was there an incident when Airbus autopilot wasn't letting the airplane land?
1
Is Autopilot NAV setting useful?
3
How exactly does a pilot engage the autopilot?
1
How do holding patterns work?
1
Why can’t takeoff rejection be automated?
20
Why does the autopilot disengage even when it does not receive pilot input?
3
Why are the A300/310’s electric pitch trim switches inhibited with the autopilot engaged?