Why does the SR-71 Blackbird sometimes have dents in the nose?

On many pictures (maybe on most of the pictures) part of nose looks hammered or slightly smashed, or bent. Please note these 2 symmetric dents just behind nose spike: 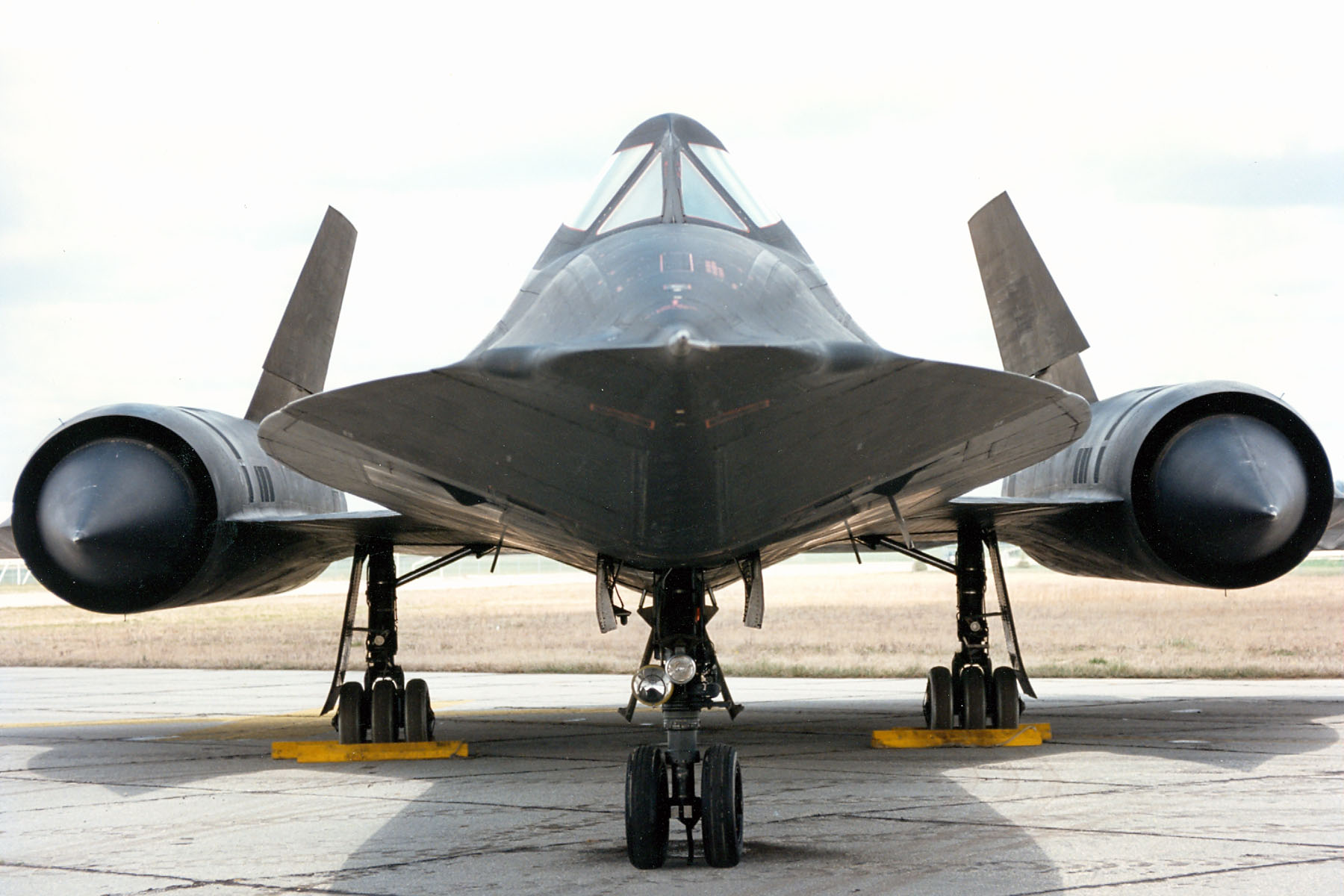 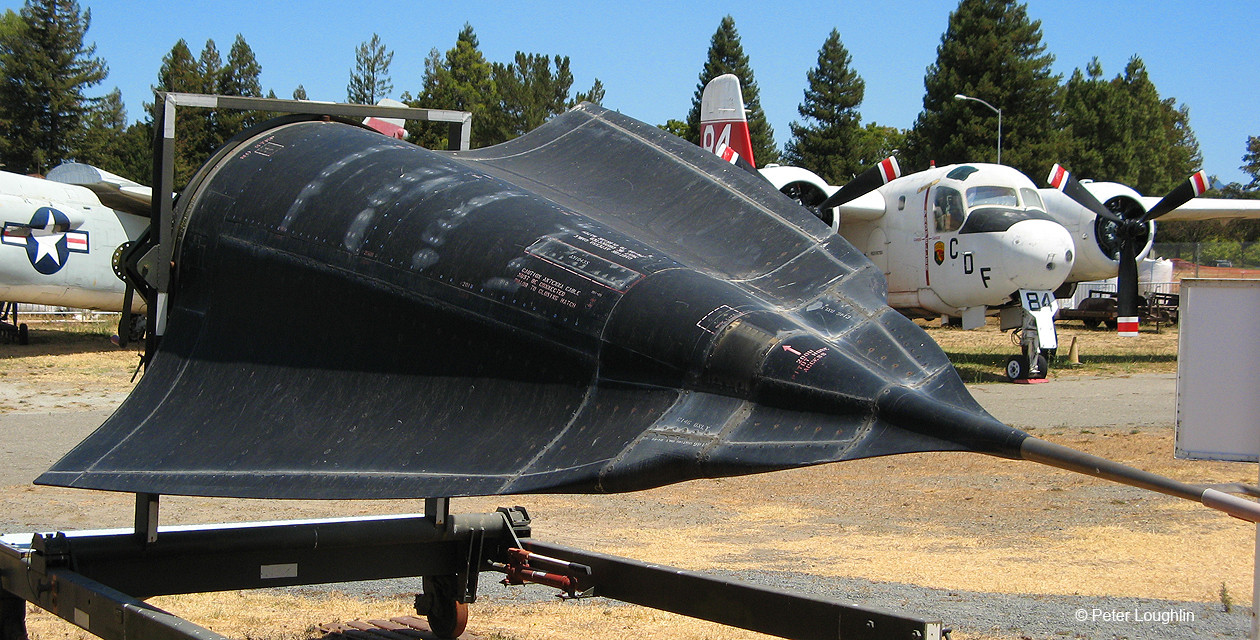 On other pictures these dents are missing: 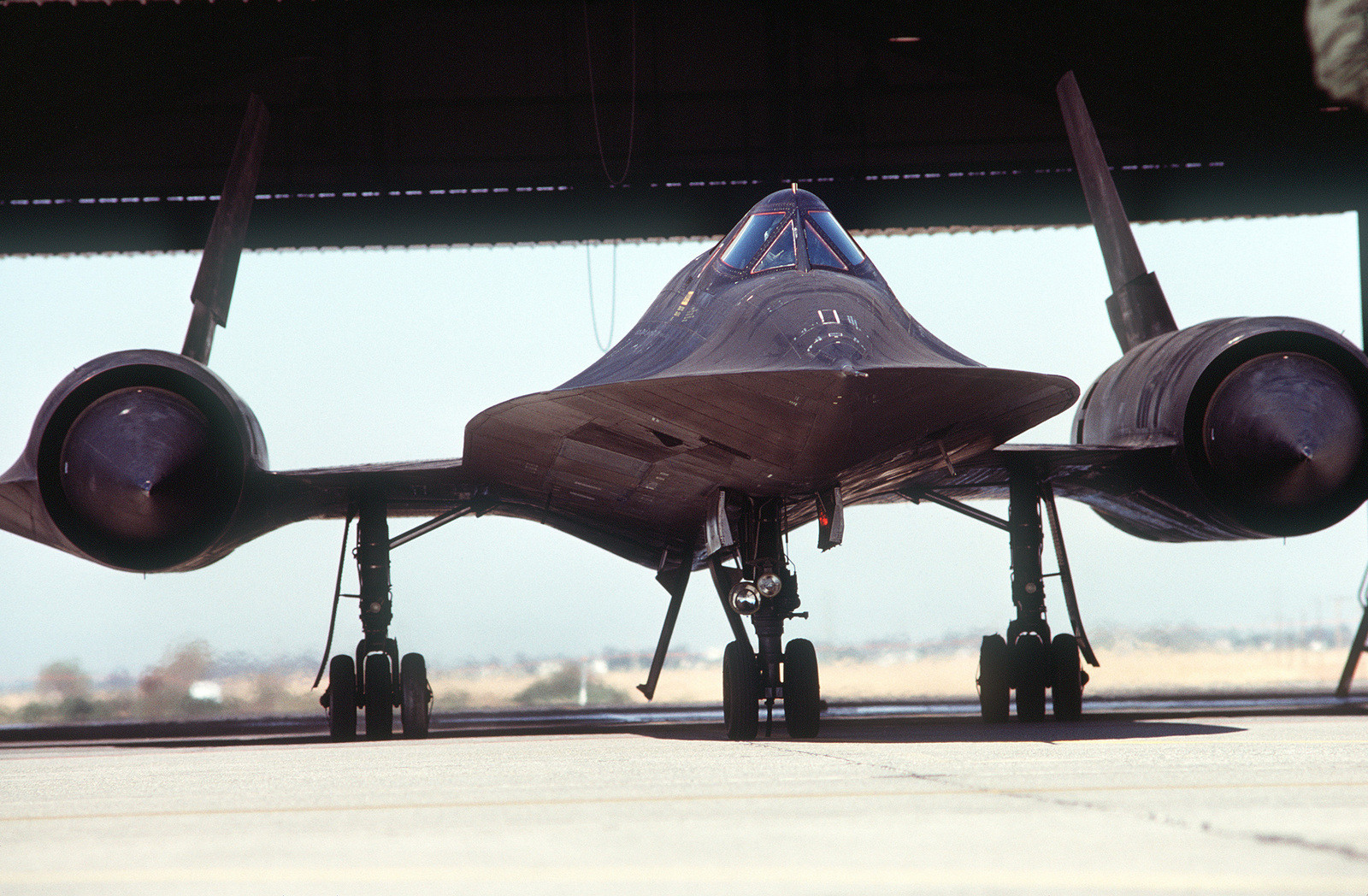 Why? Is this a feature or damage?

The SR-71 had a detachable nose (photo #2), and could change between three different nose cones depending on the mission. I haven't found a lot of information on the three, other than what this site and this site mentions:

Got it. Those indents are cut-outs for the "DEF A2" radar warning and ECM system. 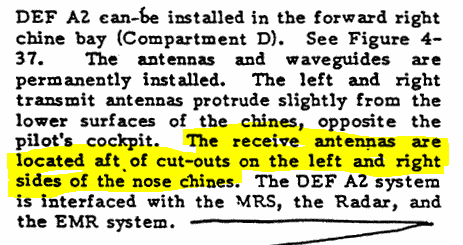 The receive antennas are located aft of cut-outs on the left and right nose chines.

The transmit antennas may also be visible in the OP's picture on the underside of the A/C, but hard to say.

This manual is linked from the wikipedia article on the SR-71 as refs 72-75. Direct link to the imaged page from the manual: https://www.sr-71.org/blackbird/manual/4/4-124.php

Note that the manual is silent on rear-facing sensors. This is consistent with the SR-71's primary defense characteristic, that being speed to outrun all threats. To the SR-71, a threat not already in the forward cone is simply not a threat. Also alluded to in this article about a one-off SR-71 development for countering an eventual hole in the defense strategy:

There was also the possible threat that future ground defenses would someday have the ability to reach the SR-71 from behind since it carried no aft facing defensive countermeasures.

There's an illustration without explanation on a reddit thread:

The picture there is not attributed, and at any rate, is too large to upload here. As mentioned in the reddit thread, the SR-71 itself did not carry the large radar illustrated -- the picture is actually of a YF-12, but close enough for our purposes here, as the other element in the picture is clearly identifiable as lying within the cut-out, and consistent with the manual's description of the DEF A2 system receive antenna. It shows the fairing removed from the area in question, revealing a light/off-white/silvery disc positioned at the aft end of the cutout.

The dents are there to provide a proper thickness window for DEF systems. Ferry noses had no need for DEF systems and so didn't have the bulges. If you look carefully at the noses you will see that there is a band just aft of the pitot mast that is all composite and it was called an isolation something or other. There were several noses. OBC is optical bar camera and could take a horizon to horizon panoramic picture like every second - in stereo if you wanted to use twice as much film. The SLR or side looking radar, which was replaced by the ASARS advanced synthetic aperture radar. The Asars nose looks pregnant and is quite distinct. Those are the operational noses of which I know. There may have been others before my time. There was a capre nose, but I don't know what CAPRE stands for or if that nose is distinct from the ferry nose. The SR was originally intended to have not only swappable noses but also swappable forebodies and they would latch them at the fs 715 break. you would have an interceptor forebody, a penetrating bomber forebody, a recon forebody, which are way cheaper than the whole proulsion system, which would be swapped out according to mission requirements I was on the project in Burbank from 1987 to 1990

Bjelleklang is right, the nose is detachable and would be switched out according to the mission's needs. The bulges are a key component of the (for that time) very sophisticated radar imaging system, ASARS-1. There's more information here.

When looking at a picture of a Blackbird, you might be looking at either of 2 different aircraft - the YF12 and the SR71. One of the differences between them is the nose - the SR71 has a smooth continuous chine, whereas the YF12 has the indentations that you've spotted but with usually a forward-looking sensor there (possibly IR?).

So it depends which aircraft you're looking at.

I don't have a copy with me right now, but the book Skunk Works is Ben Rich's account of taking over the Lockheed special-projects group from Kelly Johnson, and includes quite a lot of description of the SR-71 development and operation.

As I recall, he described that the SR-71 nose would often soften and deform in flight from the heat of very high speeds. I suspect that the bulges are a product of that.

As to why they are so symmetrical, I especially notice on your second picture, where the bulges appear to be propagating back from the join in sections.

22
Why do Boeing and Airbus have distinctively different nose designs?
4
Why does the bottom part of an aircraft nose curve upwards?
30
Why was the production of the Lockheed SR-71 Blackbird halted?
4
What material was/is used on the skin of the Blackbird SR71?
2
What Blackbird variant is the one at the Kalamazoo Air Zoo?
2
How does the Blackbird SR-71 pressurize the cockpit at Mach 3?
1
Why does the A320 still have this old fashioned nose?
0
Why does the Tu-134UBL have a sharp/pointed nose cone?
10
Why do Russian Su-30SM fighters have white nose radomes?
23
Why did the SR-71 Blackbird have a light on its top?