Why is the stagnation point on the upper surface before the start of circulation?

While I know that this is not experimentally observed nor does it make intuitive sense, I would like to know why the starting vortex does not form on the bottom.

To shed more light, here are some instances of where authors state that the starting vortex starts on the upper surface, but never explain why it doesn't start on the lower one: (taken from Bertin): "At the instant of starting, the flow is a potential flow without circulation, and the streamlines are as shown in Figs. 6.3 a, with a stagnation point occurring on the rear upper surface"

(taken from Understanding Aerodynamics) "It can be shown, based on starting the flow from rest, that in the absence of viscosity, the nonlifting flow pattern of Figure 7.1.3a is the one that would occur... " 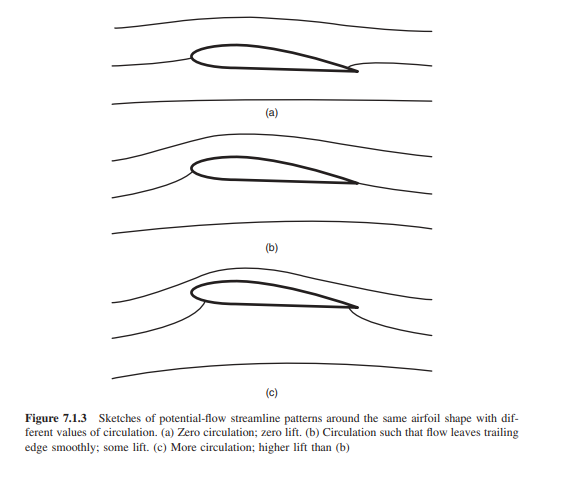 So how can it be shown (mathematically) or using strong rigorous theoretical arguments that the stagnation point cannot be at the lower surface before circulation?

The illustrations under the time-invariant, inviscid, irrotational and incompressible (potential) description is a bit misleading, in my opinion. In the real world, assuming the airfoil starts from rest (no flow field) and you start accelerating it to some airspeed, viscosity should start generating vorticity as soon as airspeed becomes non-zero. Therefore, the non-lifting flow field would never exist in the first place.

The non-lifting flow field serves better as an illustration of the flow solution using uniform + doublet flows. In this case, there is a unique solution for a uniform flow past a cylinder with radius $R$:

Since we can conformally transform most airfoil geometries into a cylinder, flow solutions past a cylinder is a generalization to those past airfoils. The above result assumes zero angle of attack. But since cylinder is symmetrical, a non-zero AOA simply rotates the result by that AOA, and that's why you have the rear stagnation point on the upper airfoil surface.

For a lifting flow, we would need to model with uniform + doublet + vortex flows. In this case, a set of solutions can be obtained for a cylinder:

Notice that there is, at this point, no imposition on what the vortex strength ($\Gamma$) has to be. You can have an infinite number of lifting solutions with an arbitrary value of vortex strength (at the same AOA). I think that's what (b) and (c) of your second set of figures are trying to illustrate. We get around this by specifying the Kutta-Condition and impose the stagnation point at the trailing edge to get a unique solution.

Since the total flow field must have zero circulation, the starting vortex must have a counter-clockwise circulation.

Nick presents a very interesting way of looking at changes in airfoil circulation, not by changing AOA, but by changing speed. In a review of polar diagrams, it is becoming apparent that lift creation from circulation (the "Bernoulli bump" in the lift vs airfoil AOA curve), where much lift can be had with very little increase in drag, requires a Reynolds number of sufficient value. For the same chord (of the same airfoil), this means sufficient speed to bring the stagnation point off the top of the wing to behind the wing in order to accelerate air over the top of the wing.

This is difficult to present in diagrams without picturing the motion. As a wing, pitched to a positive AOA, speeds up, what happens is analogous to watching the transom of a boat as it accelerates to the point where the boiling wake separates from the boat and forms the "vee" behind the boat .

With a wing, once the "wake" is behind the wing, air is pulled across the top of the wing (and from all directions) to fill in the lower pressure area. But as the wing is continuously moving forward, this is a constantly repeating process as long as AOA and velocity are maintained.

Slow the boat down, and the boiling wake returns to the transom. It is in this light that both sets of diagrams appear to be non-contradictory.

Since the wing is pitched up, we would expect the stagnation point to form on the upper surface first.

There are a few papers that show either experimentally or through simulation something very close to potential flow without circulation a fraction of a second after start of motion.

If you draw flow separation in BL of forward flow on top surface it creates CCW starting vortex.

Not the answer you're looking for? Browse other questions tagged aerodynamics aircraft-physics fluid-mechanics fluid-dynamics or ask your own question.

7
Why does the vortex created by wing affects its own angle of attack?
2
Are these pressure and velocity distributions calculated by CFD simulation correct?
14
Why do most GA aircraft not have vortex generators?
9
Is there a physical argument for the Kutta-Joukowski theorem?
5
Which are some planes shaped like an inverted wing?
10
Why do wall-to-wall airfoils in wind tunnels produce no (or infinitesimal) downwash?
11
Aerodynamic advantage of blunt noses and WHY (subsonic)
2
Why does the Biot-Savart law give the induced velocity of a infinitesimal segment of a vortex filament at point P?
3
How does downwash affect angle of attack?