I have some questions about modern aircraft carriers and the tradeoffs they make when choosing between straight or angled runways when used with modern jet aircraft for rolling takeoffs.

This question is not about old (e.g. WW2) aircraft carriers with straight decks nor is it about propeller planes or jet aircraft with VTOL or STOL.

So let's establish a few things first (obviously please correct me if I'm wrong on anything):

b. Angled runways allow aircraft to bail out and try again during recovery.

c. Angled decks have a shorter takeoff runways and shorter landing runways than straight decks (which can just have a single longer runway for both tasks).

d. As a result of (c), assistive devices for landing and takeoff (such as catapults) are much more critical with angled decks than straight decks. (FALSIFIED because carrier decks are several times shorter than required and a little extra runway length is not going to matter)

So here are my question:

ADDENDUM: There isn’t enough space in the comments section to refute the multiple inaccuracies in Peter Smith’s response to this question, so I will address them here:

All modern US Navy carriers have 4 catapults, 2 at the bow and 2 at the waist. (This has been consistent for the last 40-50 years) The “waist” catapults (cats 3 & 4) are so named because they are amidships, and thus cannot be used during landing operations because they foul the landing area. The photo in his answer shows the two bow catapults. The one pictured on the right is NOT a waist catapult, it is cat 1.

Simultaneous launch and recovery is possible however. Generally the launch starts first while the previous cycle is holding overhead, using all 4 catapults for efficiency. Once they get to a point where most of the next cycle is airborne and the landing area is clear, they will “wrap” the waist catapults and begin recovering the earlier cycle while they finish launching off the bow.

The only caveat is that longer wingspan aircraft like the Tomcat and E2 will foul the landing area if they are on the left bow catapult (cat 2) with their wings spread. For this reason they will finish launching them from the right bow catapult (cat 1) if recoveries have begun. This is not a problem with Hornets, and possibly not an issue on the largest of carriers.

It is also definitely not true that aircraft are not parked anywhere but the bow during recovery. Any spot outside the landing area foul lines is fair game. It is a very common sight to see aircraft parked on both sides of the landing area on final approach. But don’t take my word for it, there are lots of videos and photos on line to verify this…

Finally, the arresting cables are not forward of the “aft lift” you show in your photo. (Elevator 1 or JBD?) Again, this photo is of the bow only. The two waist catapults and the landing area are well aft and left of the perspective this photo was taken from.

BTW, the diagram of the angle deck carrier in the question is not an accurate representation of the current class of US Navy fixed wing CVN Carriers. Below is a good diagram showing the layout of the 4 catapults in relationship to the landing area. 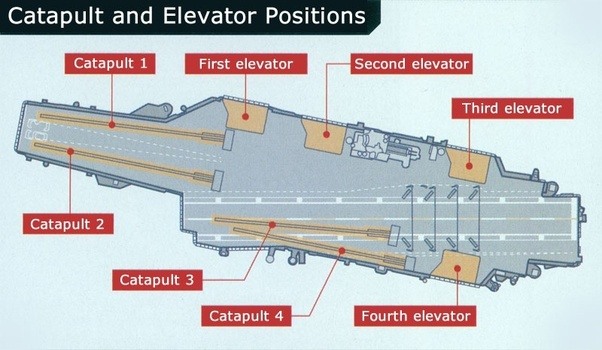 To answer the questions you asked:

1) It isn’t a question of whether a STOVL aircraft can takeoff on the angled deck of a CATOBAR ship, It’s a question of how much payload the jet can carry doing so. Short takeoff aircraft like the Harrier or F-35B can only perform short takeoffs aboard ship with limited warlords as compared with jets launched by catapult.

2) This all depends on the class of ship and the layout of the flight deck. Incidentally CATOBAR type ships are in fact capable of simultaneous launch and recovery, depending on the ship. You’re also comparing apples to oranges here, as you are using STOVL aircraft versus conventional aircraft requiring arresting gear to stop. STOVL aircraft return and land vertically and, technically, require nothing more than a helipad to do so.

During World War II, Essex class aircraft carriers did allow for simultaneous launch and recovery. This was a risk here as aircraft landing were basically on a one-way approach without the option of a go around. If the aircraft failed to snag a wire it would take a barricade erected before it could make contact with aircraft parked on the bow. Past World War II and going into the jet age, this was not possible as new jet aircraft or larger heavier and much faster and required much greater distances to stop in and arrested landing. The angle deck facilitated this well and also provided for the option of a go around should a pilot need it, either for a bad approach or bolter.

In regards to how quickly a carrier with STOVL type aircraft can lodging recover versus conventional aircraft, when a CATOBAR carrier is in full launch mode, they can shoot an aircraft every 45 seconds - From each catapult. On the Nimitz class aircraft carrier that’s gonna be an airplane every 11 seconds! Clearly that is not possible with a single launch of a sort field aircraft from a single takeoff area. And with a conventional takeoff aircraft, you can launch more aircraft with greater range and greater war loads, as opposed to a smaller carrier requiring the STOVL aircraft.

3) The inclusion of an angle deck is not necessarily indicative of the cost of the ship. Lots of aircraft carriers had angle decks in the past and were nowhere near the cost of a modern Nimitz or Ford class ships. The cost is going to be determined by the size of the ship, the equipment on board, etc.

Trying to do simultaneous launch and recovery on a canted deck is impossible in normal circumstances as the waist catapult and bow catapult are inside the wingtip safety line.

You can also see the catapult wingtip safety lines in the picture incidentally.

I have annotated the picture: 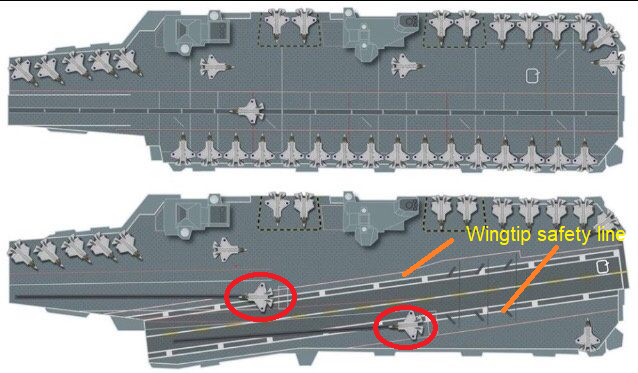 The aircraft with red circles are in the position they would have when loaded onto the catapult and as you can see, they violate the landing area.

Note that the waist cat (the further right of the two) has a much lower angle relative to the centreline than the landing area angle; this is to minimise the angular offset for the aircraft when launched (the carrier will be headed into the wind).

During launch, all aircraft are kept behind the area of the catapults (immediately behind them are jet blast deflectors to prevent the jet blast going all the way down the deck). 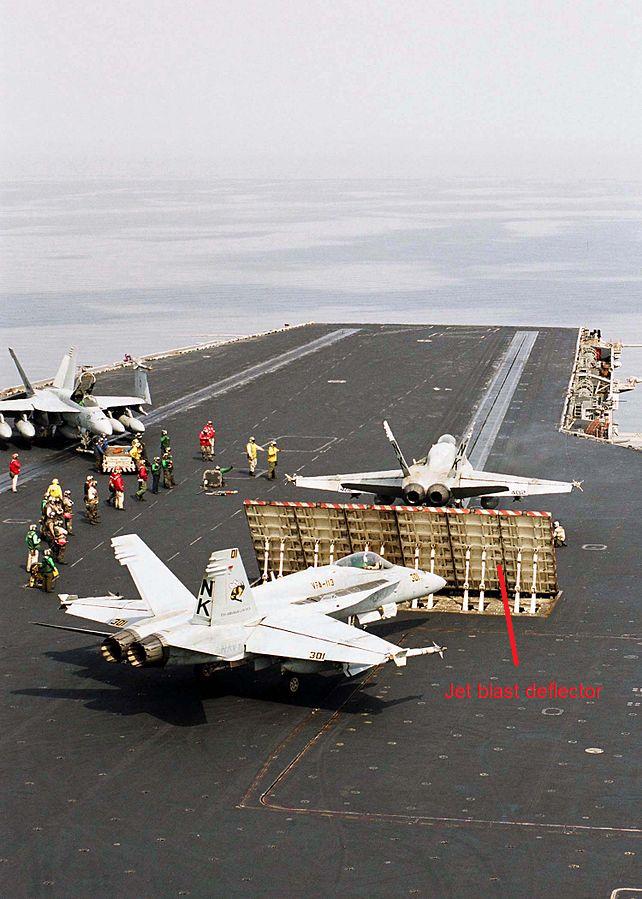 During recovery (not landing - an aircraft is actually flown onto the deck well above stall speed to facilitate a go-around often known as a bolter) when an aircraft has been recovered they are moved to the bow area away from the angle (in this situation it is known as an aircraft park); once the angle is properly clear, the next aircraft can be recovered.

No aircraft are usually parked anywhere except the bow area during recovery just in case things go very badly wrong.

The ability to park the recovered aircraft away from the direction of travel of other aircraft being recovered is a major advantage of a canted deck.

The arrestor wires (usually 4) are just forward of the aft lift you can see in the picture.

The usual mode of operation is a launch / recovery cycle. Launch a group of aircraft and then recover the previously launched group. Aircraft not involved in the launch cycle are kept in the hangar(s) or a safe area of the deck (such as the starboard lift in the picture).

Not the answer you're looking for? Browse other questions tagged aircraft-carrier or ask your own question.