Is there a minimal approach speed for airliners during rush hour?

For busy airport, sequencing can be complexe. If the ATC put all aircraft in front of each other with the correct separation (which can be really small for busy airports) in final, if the airliners' approach speed vary significantly, one plane could catch up the preceding one. Can the ATC ask for a pilot to increase its approach speed up to a minimum speed?

ATC can not only ask for a minimum speed, but rather instruct each aircraft to (more or less) exactly fly at a particular speed. This is essential for maintaining separation. As J. Hougaard pointed out in the comments, the speed on the last 4 NM is always up to the pilot to slow down to final approach speed.

It is the duty of the pilot to evaluate if it is safe to comply with this restriction. In case the aircraft cannot fly as slow as asked for, the pilot can simply reply UNABLE and ATC will either try to make it work or instruct the aircraft to go around.

Some airports also publish speed restrictions on the approach charts. This is an example of a minimum speed from the ILS approach into 01L/R at Stockholm-Arlanda (ESSA):

More precise speed restrictions are for example given on the STAR charts of the (now closed) Istanbul-Atatürk airport (LTBA): 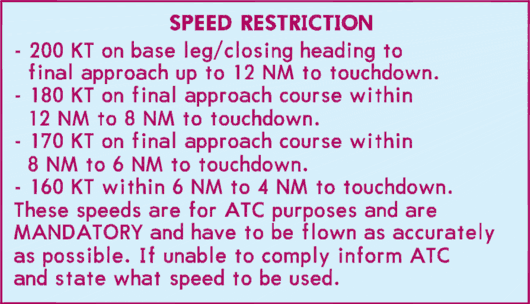 From my experience in busy airspace (Chicago, New York, San Francisco), ATC will ask you to maintain a specific speed until the final approach fix. Usually this speed is faster than what you'd ideally be doing at that position. After the FAF, you can slow to the appropriate final approach speed. It's true that approach speeds vary depending on weight and weather conditions - ATC knows this and expects it, but the spacing is adequate for aircraft with variable approach speeds the last 4 miles of the landing.

Not the answer you're looking for? Browse other questions tagged air-traffic-control airport-operations or ask your own question.

48
How can I politely remind ATC that I'm waiting for instructions or clearance?
28
When is an aircraft cleared to land?
5
Why would a pilot request an unusual approach/runway to ATC?
3
Is the separation distance between two aircraft approaching an airport the same under CDA and Non-CDA scenario?
12
Can tower clear aircraft for take off with traffic still on the runway?
8
Is there ATC audio from the Sled Driver Speed Check story?
6
What separation and information does ATC provide in different airspace classes?
13
Can an issued landing clearance be replaced with “continue approach”?
1
What are the specific side step minimums for an approach?