Why does spoiler extension cause straight-wing Learjets to pitch down, rather than up, and why did it take so long to discover this?

Straight-wing Learjets (the 23, 24, 25, 35, and 36), the first generation of the popular business-jet series, are (especially when not equipped with any of the many first- and third-party wing modifications developed for these aircraft) extremely unforgiving to fly, with a well-deserved reputation for killing pilots who, whether accidentally or deliberately, pushed their aircraft’s limits.

One of the factors contributing to this is their extreme susceptibility to mach tuck (a product of a wing design which proved inordinately prone to airflow separation with the slightest provocation, something also playing a part in the unusual ease with which a stock straight-wing Learjet can be inadvertently stalled), a problem aggravated by one of the steps originally called for when recovering from an accidental overspeed or overmach.1

Namely, the extension of the aircraft’s spoilers.

This would, intuitively, seem to be a valid technique for recovering from a high-speed dive, for three reasons:

Indeed, for most aircraft, extending the spoilers in flight does indeed cause the aircraft to pitch up and slow;2 this is not, however, the case for straight-wing Learjets, which, instead, pitch strongly down - and speed up even further - upon spoiler extension.

To quote the NTSB (the emphasis, however, is my own):

Although several revisions to the [Learjet 24] AFM were issued on and following October 1, 1980, none of the revisions were found attached to the copy of the AFM or in and around the wreckage. The following revision was approved on October 1, 1980.

These speeds shall not be deliberately exceeded in any flight condition except where higher speed is specifically authorized for flight tests of pilot training or in approved emergency procedures.

WARNING: Do not extend the spoilers, or operate with spoilers deployed, at speeds above VMO/MMO [sic] due to the significant nose down pitching moment associated with spoiler deployment.

If VMO or MMO is inadvertently exceeded:

WARNING: Do not extend the spoilers, or operate with the spoilers deployed, at speeds above VMO/MMO [sic] due to the significant nose down pitching moment associated with spoiler deployment.

[...] The following extracts[,] regarding specific problem areas discussed in the [FAA’s] interim SCR report, were made available to the Safety Board [by the FAA] on May 8, 1981:

c. Extension of the spoilers at high speed causes a large nose down pitching moment. For the Lear 35 D/F models, stick force required to hold airspeed with spoiler extension at VMO varies from 46 lbs. at aft c.g. to 84 lbs. at forward c.g.[.] [Page 15 (18). Here, the NTSB is quoting the FAA's 1980-81 special certification review (SCR) of the Learjet 24 and later.3]

If a pitch upset occurs near MMO, the airplane can accelerate rapidly into a region where the flying qualities are unacceptable. Consider, for example, any type of nose down pitch axis malfunction (such as trim runaway, pusher hardover, autopilot hardover, etc.). In this case, if the pilot restrains the control column, the pull force can go as high as 50-60 lbs. (80 lbs. for pusher malfunction.)[.] Because of pilot reaction time (3 seconds according to 8110.10), [...] the speed will have increased beyond the limit Mach number. If the pilot follows the AFM procedure for overspeed and deploys the spoilers (which is instinctive), the required pull force will increase an additional 50-80 lbs. Also, because of the pitch instability due to Mach tuck, the pull force will continue to increase as speed increases. Adding the maneuvering stick force required to pull 1.5 g, the total pilot force required for recovery can be as high as 150-200 lbs.[.]

The stick puller was installed to prevent Mach overspeed, but[,] in the event of a nose down pitch axis malfunction, and/or deployment of the spoilers, its 18 lb. pull becomes insignificant.

If, after the pilot notices the overspeed, he deploys the spoilers, or if aileron “snatch” rolls the airplane to an excessive bank angle, it may become impossible to recover. [Pages 16-17 (19-20).]

[...] If the flightcrew had deployed the spoilers at this point without instantly reducing thrust, the control column pull forces would have increased and the speed instability and roll control could have progressed to the point where it would have become impossible to recover the aircraft. [Page 22 (25).]

11. The flightcrew probably deployed the spoilers at some point beyond airspeed limits in an attempt to regain control of the aircraft; this probably imposed excessive control wheel forces and prevented recovery of the aircraft. [Page 26 (29).]

The investigation of these accidents prompted research related to the following key areas:

(2) Use of spoilers in a high speed recovery; [Page 43 (45). In the first paragraph, the NTSB is quoting the NTSB's 1979 study of Learjet performance characteristics. This last extract is from an appendix discussing the susceptibility of straight-wing Learjets to loss of control at high altitudes and/or airspeeds.]

The Learjet 23 was certificated, and entered service, in 1964; the Learjet 24 in 1966; the Learjet 25 in 1967; and the Learjet 35 and 36 in 1974. Indicating that the spoiler-induced pitch-down moment of straight-wing Learjets was neither discovered during initial flight testing, nor in many years (nearly a decade and a half for the Learjet 23) of service, only being brought to light by special flight tests in May 1979 resulting from the NTSB’s investigation of an October 1978 crash of a Learjet 25.

Why do straight-wing Learjets pitch down rather than up when their spoilers are extended, and why was this not discovered during initial flight testing, or for many years thereafter?

1: Another aggravating factor was the susceptibility of early Learjets to autopilot malfunctions which could cause large, uncommanded pitch control inputs. Yet another aggravating factor was the fact that the Learjet 24 and 25 were originally certificated with an excessively high service ceiling (51 kft), an altitude at which both aircraft were far into their coffin corner, leaving very little margin of safety between the aircraft’s stall speed and its maximum safe mach number (this one was permanently corrected by a 1981 airworthiness directive that limited the Learjet 24 and 25 to a 45-kft maximum altitude, although they remained unforgiving even outside the coffin corner).

2: Assuming, of course, that the aircraft has sufficient airspeed and angle-of-attack reserve to do this without stalling.

3: The Learjet 23 was not included in the review, as the focus of the SCR was the Learjets certificated under 14 CFR 25, which the Learjet 23 predates; however, the conclusions reached by (and the airworthiness directives issued as a result of) the SCR are also applicable to the Learjet 23, which is extremely similar to the Learjet 24 and 25.

To think that spoilers generate pitch up moment because it sticks up is an over (and incorrect) simplification. The torque generated by the drag is also minimally contributory to the overall pitching moment. Rather, let me break it down into the following factors, then we can go back to why the Lear 25 may experience pitch down when its spoilers are deployed.

1. Pressure distribution due to spoiler on 2D section

Spoiler attached to the upper surface of an airfoil will cause the flow to separate, thereby resulting in the loss of lift and in the increase of drag. The effect of the spoiler, however, are not local; it changes the pressure distribution of both the upper and lower surface. Take a look at a typical pressure distribution with spoiler (Ref. ESDU Item 90030): 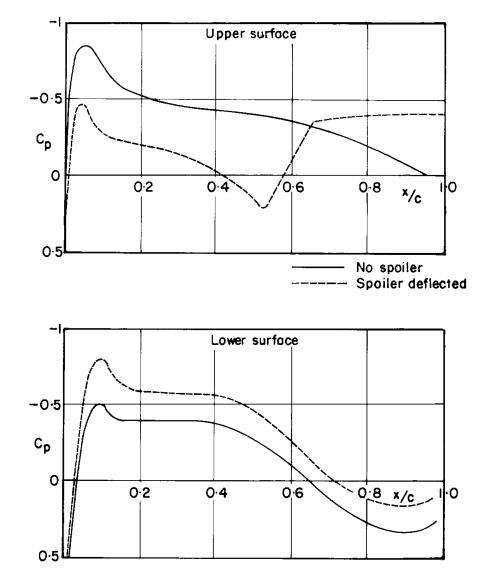 As you can see, on the upper surface, the effect is a net down load ahead of the spoiler (located at roughly 50% chord) and a suction plateau behind it. In this particular example, it would create a net nose down moment about the quarter chord. On the lower surface as a whole, there is an increased down load, resulting in a net nose up moment about the quarter chord. Depending on geometry of the airfoil and the chord-wise location of the spoiler, which change the relative strengths of the moments, you can get a net nose-up or nose-down moment.

The effect of chord-wise location is explored in this ARC report using an RAE100 symmetric airfoil. I've summarized the pitching moment result about the quarter chord below. As the spoiler moves aft (xs/c), there is an increasing nose-up pitching moment. 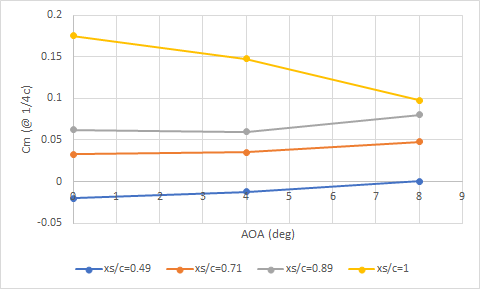 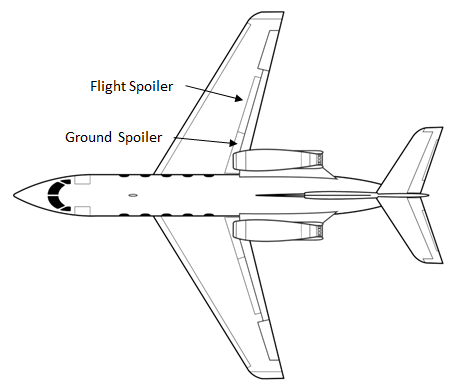 It's pretty intuitive to understand that the more outboard the lift loss, the more nose up pitch the aircraft experiences due to the sweep back at, say, 25% MAC. This is indeed the case from sources such as the NASA Technical Paper 1419. In it, you can see the pitch up increasing progressively as more outboard spoilers are deflected.

A note-worthy source is the NTSB accident report on the Gulfstream II of 1975, which I quote (boldened texts are from me):

3. Downwash on the tail

Unfortunately, I have yet to find a non-proprietary literature source that documents the change in downwash from spoiler deployment. My intuition is that, due to the decrease in lift, we would expect to see a reduction in downwash. 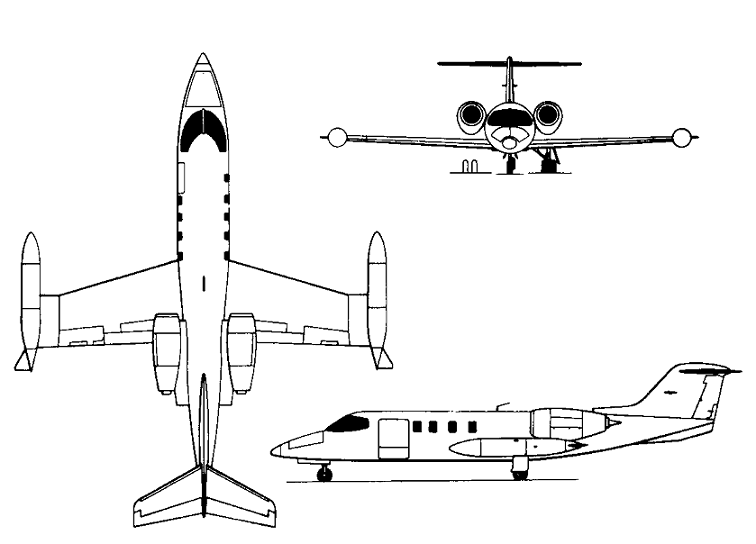 The jet is gently swept about the quarter chord. It has only one pair of spoilers located inboard. Depending on the relative contributions of the above factors, it is not difficult to see why the model may experience pitch-down with its spoilers deflected.

5
Why do 20-series Learjets have such an extreme susceptibility to mach tuck?
4
Why were most of the first-generation-Learjet wing mods never approved for the Learjet 23?

13
Why does an aircraft pitch up when the speed increases?
0
Why does the DHC-6 pitch down when the flaps are retracted, rather than up?
18
Why can't wing-mounted spoilers be used to steepen approaches?
5
Why do 20-series Learjets have such an extreme susceptibility to mach tuck?
11
Do aircraft using only spoilerons for roll control, with no conventional ailerons, have a crossover airspeed?
6
Why does the use of reverse thrust on the DC-8 generate a pitch-up moment rather than a pitch-down moment?
4
Why were most of the first-generation-Learjet wing mods never approved for the Learjet 23?
3
What is the term for an aileron that’s also used as a ground spoiler?
0
Why does spoiler extension during touchdown cause a pitch up moment?