What is the explanation of this airfoil phenomenon? Why the air from below the leading edge's tip deflected up? 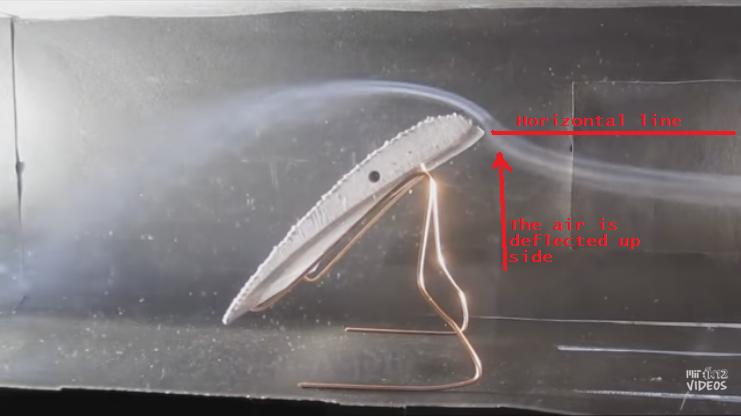 I have difficulties to understand this air phenomenon, why the air from below the leading edge's tip (from below the horizontal line) is deflected up and not just follow the bottom wing's surface? What is the physics explanation of it?

The short answer is: because not all of the incoming air can fit under the airfoil, so some of it gets pushed up and above the leading edge. This air could also fit under the airfoil by other means like becoming denser (compressing), but that requires more energy, so it mostly flows around.

In your image, the effect is exaggerated by the closeness of the ground, which places the entire airfoil in ground effect. In normal flight conditions, without the ground blocking it, more air would be able to flow underneath the airfoil.

The longer answer has to do with the speed of sound, which is the speed at which pressure waves propagate through a fluid. If the free stream is subsonic, pressure waves generated by an object can flow upstream and alter the flow ahead of any disturbance.

This is exactly what is happening here: the airfoil is affecting the pressure field, specifically by creating an area of high pressure underneath. This affects the incoming flow, deflecting it upwards ahead of the airfoil.

If this experiment were performed in supersonic conditions, you would not see any disturbance in the incoming airflow until it hit the bow shock wave of the object, after which it would become locally subsonic and be abruptly deflected to flow around the airfoil.

There are several things to see here:

This low pressure is sucking in air from all around, and that is what bends the smoke lines ahead of the airfoil up. Of course, pressure always means a pressure difference and this effect is magnified by the blocking of the flow near the trailing edge. As @AEhere correctly observes, ground effect creates a high pressure area ahead of the lower wing and along its length which pushes the smoke lines up. At the gap between trailing edge and ground the flow speeds up again, but unfortunately there are no smoke lines to illustrate this.

The diffuse smoke lines past the nose region show that the flow slows down there and turbulence mixes the smoke with more air. The flow separates at the nose where a wedge of stagnant air helps the smoke lines to move away from the airfoil contour. Pressure from above pushes the diffuse smoke down over the rear airfoil so the smoke past the trailing edge sits on top of the flow which manages to squeeze through between the trailing edge and the ground.

Without the ground effect the upwards bending of the smoke lines would look quite similar but more air from below would fill up the area behind the airfoil so the smoke would not move quite so much down. 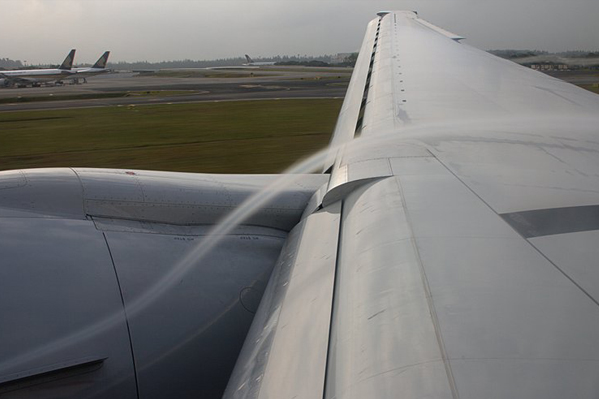 Here the flow stays attached: Note that its distance from the wing contour is constant initially and only grows when the flow slows down, indicated by the widening of the water jet. In contrast to this, on the photo in your question the flow moves away from the wing while still moving fast, indicating flow separation.

Not the answer you're looking for? Browse other questions tagged aircraft-performance aircraft-physics wind-tunnel or ask your own question.

0
How to calculate the drag on an airfoil from momentum equation (Fundamental of Aerodynamics 5th edition, J.D.Anderson)?
10
How does turn radius change with velocity between Vm and Vs, as in a 180 degree turn in a canyon?
0
What factors affect the minimum time to go from point A to point B?
5
Why are the leading edges of wings not always made as 'sharp' as possible?
5
Why does the faster-moving air over the static port not result in a lower static pressure?
3
What is physics explanation for minimum sink rate airspeed?
0
What does induced flow exactly means on helicopters flight? How is it different from downward deflection of air?
1
How does the airflow above an airfoil account for the downward turning-action of the airflow below the airfoil?