I am aware that the efficiency of the propeller implies a difference in the values of the theoretical power required curve and the corresponding shaft power required, but does that efficiency correction change the abscissae of the respective minima...?

In this diagram (taken from von Mises' 'Fluglehre') the power is specified as 'Zugleistung', i.e. as the theoretical power drag (thrust) x velocity. All usual power required diagrams use that 'theoretical power'. My question is: If we took instead the shaft power, would the airspeed for the minimum of shaft power be the same...? 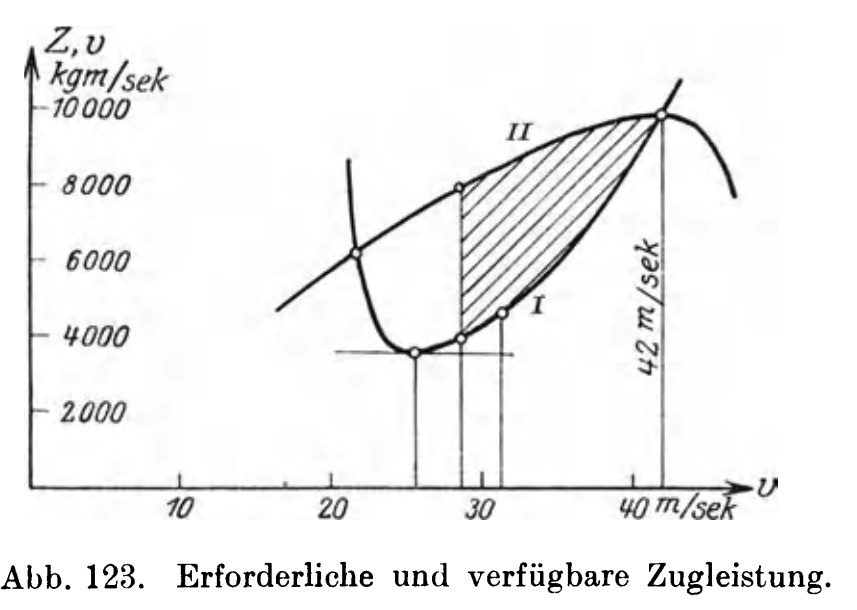 The OP is asking about power required, not power available, which, in my mind, would change the answer.

From an aircraft performance perspective, power required is the product of total aircraft drag and inertial speed ($P_R=TV$), applicable only for steady unaccelerated flight. Thus, the minimum of that curve is dependent on profile and vortex drag. In potential flow, it would be where $3C_{D_0}=C_{D_i}$ (see this answer for derivation).

Shaft power required is the power needed to be transferred to the propeller in order to achieve the aforementioned $P_R$. From the actuator disk theory, we know that it must be larger than $P_R$. The shape of this curve would depend also on the propeller itself (e.g. pitch, diameter, airfoil) and its control system (e.g. constant vs variable pitch). Therefore, the minima of the two curves do not have to coincide.

To illustrate this, I've gathered some RC propeller data from APC, which according to its website are generated based on vortex (potential) theory. The drag polar is based on a joke planform designed to accentuate the curvature of the polars:

The figure below shows the power required (P_R) for level flight and the shaft power (torque * rotation speed) needed to sustain the level flight for a few prop configurations. 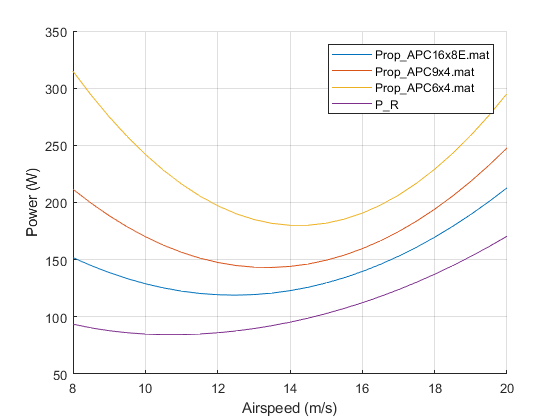 0
How to calculate aerodynamic efficiency at minimum power conditions?

2
For the same airspeed does the attitude of an airplane change with varying wind directions?
10
What is the maximum theoretical lift of a plane as a function of engine power and surface of the wings?
2
Does the minimum power required for level flight depend on CD0?
5
What are the factors required to estimate the minimum required power for an experimental aircraft of a specific mass?
3
What is the shape of the power required curve?
13
Where is the 'zone of reversed commands...'?
3
What would be the minimum number of engines required to climb in a 747?
3
What is physics explanation for minimum sink rate airspeed?
1
How do power and thrust curves compare?
0
What´s the logic behind the Power Curve?