Why is the empennage design of this Lockheed 1049E so complicated? 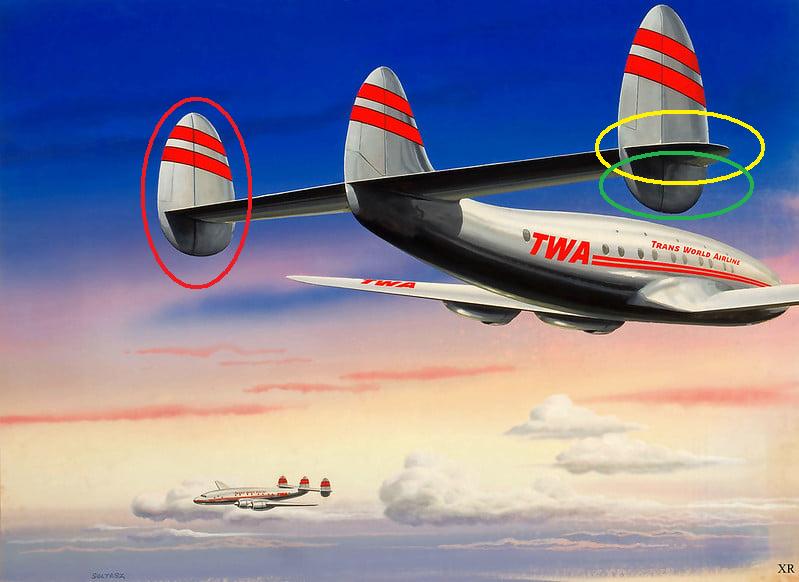 What is the reason for making the empennage of this Lockheed L-1049E Super Constellation's design look so complicated with two vertical horizontal stabilizers? In my understanding, the more components installed, the more the weight of the airplane will be, and as a result will put more load on the engines, especially if there will be more actuators required. Do all the horizontal stabilizers have controllable surfaces? What is the reason for making the horizontal and the vertical cross each other, and not attaching them at their tips (marked with yellow and green circle)?

Complicated is a matter of opinion and I wont address that specifically since its somewhat subjective. But the core of the question is "why did the L-1049E have 3 tails" which is a legitimate question for this site.

A sleek fuselage, something like an elongated fish with smooth curves, featuring a circular cross-section, a snub nose, and a triple-fin tail. Triple tailfins were selected because a single tailfin would have been too tall to fit into typical hangars.

The L-1049E had tricycle style gear that was quite tall (for the time) and a standard single tail would have made the aircraft too large to fit into the hangars that most fields had.

The above link also discusses that for a particular Military version ("WV-1") of the aircraft the lower section of the tails were extended to compensate for a radome being mounted on the top. This came along only a year into the design and the subsequent builds may have been a hold over.

Food for thought: perhaps the design of the Constellation's tail was inherited -- aesthetically if not engineering-wise-- from the Lockheed P-38 Lightning, where the position of the two vertical fins was selected to put them in the optimal position relative to the propwash from the two engines. Even on the P-38, it seems it might have been possible to generate an equally effective tail with less interference drag by rearranging proportions and positions of the various surfaces to eliminate the little "stub" ends of the horizontal tail that projected outboard of the vertical fins, for a tail design more like that of the P-61 Black Widow. With the four-motored Constellation, it seems that it would have been an even simpler matter to select proportions of the tail surfaces such that the vertical fins could have served as "end plates" for the horizontal tail, with no projecting "stub ends" outboard of the vertical fins, thus reducing interference drag. It would also seem that interference drag might have been further reduced, while still meeting other design goals, by selecting a tail design with two vertical fins rather than three.

Not the answer you're looking for? Browse other questions tagged aircraft-design aircraft-performance tail lockheed-constellation or ask your own question.

14
Does a headwind affect the climb gradient?
8
Is there anything wrong with this more symmetric aircraft design, and why isn't it used?
16
Why is the horizontal stabilizer root interface designed this way?
4
Which are the main aluminium alloys used in airliner construction?
3
Are high lift wings bad for faster speeds
1
Why don’t double-bubble fuselages cause severe fatigue problems?
9
Why does the MCAS use the horizontal stabiliser rather than the elevators?
1
Why did the Wright brothers take steps to increase the amount of vertical surface area forward of the CG on some of their aircraft?