An examination of the 737 airliner wing profile and that of a blue whale leads to the question of whether the high Reynolds number subsonic cruising airfoil and the low speed, high AOA airfoil are compatible.

The blue whale is designed to cruise efficiently over thousands of miles, through a viscous, non-compressible fluid (water). Their shape includes a rounded, sloping lower fore and a flatter top, very similar to a supercritical airfoil! Applying thrust to this shape would provide "lift" simply by directing water "down" (or pushing the whale "up").

We can see the supercritical wing is more in the range of the blue whale!

When pitched up to a higher AOA, this shape would be a very poor wing in the classic Bernoulli sense, as the significantly contributing top lift would be lost at a lower AOA than a top rounded airfoil, behaving much more like a flat plate (see polars).

There are accounts of airline pilots extending their slats at higher speeds for better performance (and getting into trouble for doing so).

So, for modern designers, would it not be important to consider a more robust low speed system that could be left on (in varying degrees) at higher speeds (V maximum flaps and slats extended airspeed) to help avoid stalling?

This could create a wider safety margin for the climb-out and landing phases of flight. Hard earned efficiency gains in cruising flight (from the supercritical wing) would be kept, when they are fully retracted, but only at safe speed and AOA conditions (for example, above 10,000 feet or at cruising flight level).

The short answer, whales aside, is yes. Such wings, called "supercritical" because the critical Mach# is elevated, tend to suffer from leading edge stall that makes the aircraft's natural stall behaviour dangerous. These airplanes typically require stick pushers (as @Peter Kampf mentions in this answer, the 737, even the later ones that got redesigned wings, doesn't really have a "pure" supercritical wing and I believe that's why they don't require stick pushers).

The Challenger business jets and the CRJ line of Regionals all have supercritical wing profiles. The profile promotes a pre-stall flow separation and immediate reattachment at the LE, called a Laminar Bubble, which would form at some AOA prior to stall. 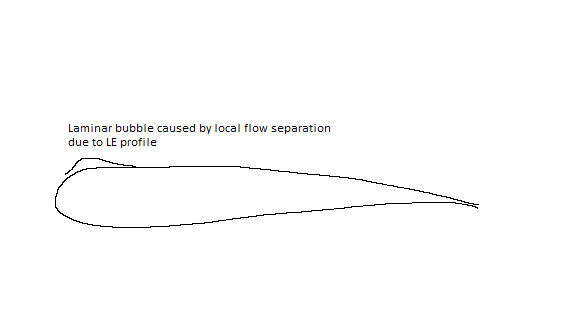 This had an effect similar to having a stall strip or ice shape, with the bubble forming a trip wire so to speak. It causes the wing to stall at the leading edge instead of advancing from the trailing edge, which meant the entire wing just let go all at once with no buffet or other warning, with a tendency to progress right into a deep stall. The Challengers and RJs have stick pushers because of this; they must never be allowed to stall naturally, because it is probably going to be unrecoverable. Bombardier did a lot of testing with various aerodynamic band-aids like vortex generators and vortilons and such, and they didn't help.

The CRJs larger than the 200 have LE slats and are just about unstallable slats out, but they also have the same LE stall slats retracted and still require stick pushers. Flying with slats extended at high speed is out of the question. The drag they produce is massive, as you discover when you first land one after flying a hard leading edge CRJ200. Incorporating a fixed slot in the leading edge could be done but they are pretty draggy and would negate the benefit you're trying for in the first place, and I'm sure there are other mach related issues with a fixed slot.

Not the answer you're looking for? Browse other questions tagged airfoil angle-of-attack transonic or ask your own question.

5
Is the Reynold's number a function of the fluid flow stream or the obstruction?
3
For a flying wing airfoil, which AOA is to consider when selecting Cl?
2
How (or where) do I find an airfoil optimized for low reynolds numbers (100,000~150,000)?
12
Why isn't there a single best airfoil for subsonic flight?
9
How does increasing the RPM result in a higher AOA for the blades?
1
How to reproduce NASA/Langley airfoils for general aviation with long chord lengths?
2
Which airfoil to use for high subsonic flight?
2
How does airfoil affect the coefficient of lift vs. AOA slope?
1
How do i find a supercritical airfoil for my preliminary design?