How can I find places to store/land a private airplane?

To celebrate, I want to fly my family from Texas to Orlando Florida for a weekend visit.

However, how do I coordinate the landing in Orlando? I know commercial options are available like the Orlando International Airport, but that seems... expensive.

Even if I paid to land the Cessna (which I have no idea of the red tape involved with this), I'd still have to find somewhere to "park" to plane for my weekend trip.

However, looking at other options in the area I see several flight schools, and even some "private owned" airports with operational runways.

Which brings me to my question: if the pilot of a small aircraft wants to land in place far yonder, what's the best way to plan for this?

Is it common practice to call all the "small guys" in the area first and see if they're willing to work with your flight schedule?

The first thing you usually do as a pilot is to look at a sectional chart, which shows all the airports and airspace in the area you want to fly (and transit). They look like this: 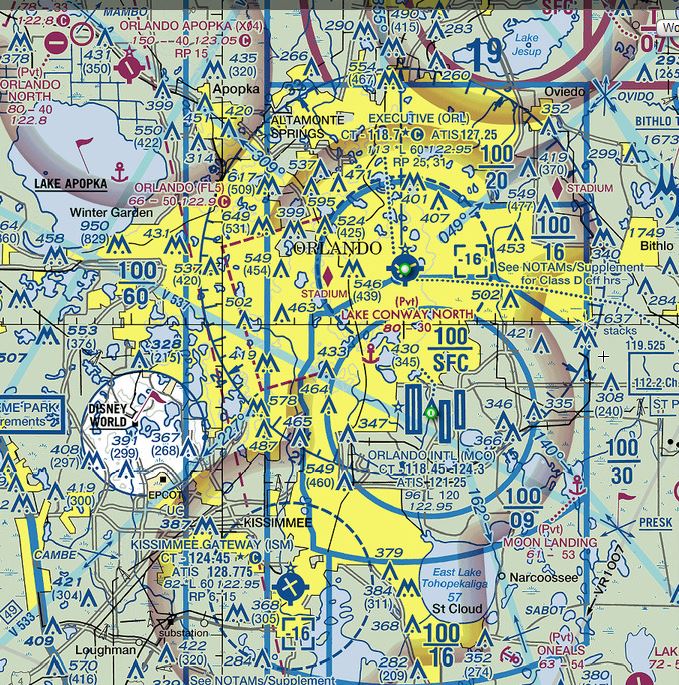 You can see that the Orlando area offers a number of airports. I would avoid anything with the word "International" or "INTL" in the name. Mostly these airports cater to commercial traffic; GA traffic is allowed but usually requires a lot more work to get you in, especially if you are only VFR (not instrument rated or on an instrument flight plan).

You can see Orlando Apopka (X04) in the upper left corner, but also available are Executive (ORL) just above Orlando International or Kissimmee Gateway (ISM) in the lower center/left. If you want to make sure the airport has fuel, these are denoted by the "ticks" around the airport symbol: 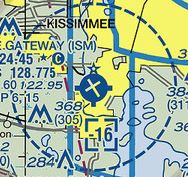 If you want to look at more sectional charts, they are offered for free on sites such as Skyvector which also has flight planning tools.

Which brings me to my question, if the pilot of a small aircraft wants to land in place far yonder what's the best way to plan for this?

Flight planning is part of your initial pilot training. By the time you earn your PPL you will have planned a number of cross-country flights (albeit not that far as Texas->Florida). It starts out by picking an airport and looking up the information in the chart supplement along with one or two alternates. You then call the Fixed Base Operator (FBO) and ask about fuel rates and overnight parking, and then continue on with your flight planning tasks (like checking weather, routing, etc).

Is it common practice to call all the "small guys" in the area first and see if they're willing to work with your flight schedule.

Calling the FBO you intend to visit is advisable, especially if you need to use services like parking or crew cars. This lets them know to expect you and they can tell you what they charge. Some smaller airports won't charge for ramp tie-downs if you buy a certain amount of fuel, etc. Some airports don't have an FBO so they are "self-serve", meaning you pull up to a gas pump just like in your car and fuel yourself.

Leaving your airplane at the airport isn't like parking it in the parking structure. Airport access is tightly controlled, especially at airports that have FBO's or operating control towers. Some smaller airports don't have that and if you know how to find the codes you can pretty easily get through. Either way though, vandalism/theft is usually a non-issue. The biggest worry you have is weather. If you are really concerned about your aircraft, you can ask the FBO if they have a hangar and if there is space available. Storing your aircraft in the hangar can be very expensive. Typically you just tie down on the ramp and put in some sun-shades.

I assume you mean a major commercial airport like Orlando International. The only "viable" option to me denotes an emergency, as you should have planned to fly somewhere else and only in an emergency would you want to land at a major commercial airport. If you need to declare an emergency and land, ATC will clear the airspace and make you the only user of that airport. As for storage when you get there, many airports even the size of Orlando International have a GA area where you can tie-down, but getting fuel and even the ramp space will be very expensive.

To celebrate I want to fly my family from Texas to Orland Florida for a weekend visit.

Just FYI, a Cessna 172 is not a "family trip" aircraft. Two adults, one kid, and baggage will pretty much max out the aircraft. You can remove fuel to add more weight, but then you are puddle-jumping.

Unless the airport is marked private (PVT) you are free to use it and don't have to "borrow" anything. Only airports marked as such in the chart supplement will require prior authorization to land there, so the majority of airports are "public use" and you can just jump in your plane and fly there without warning (as long as the weather is above minimums).

Generally people don't fly GA aircraft into major international airports. It can be done, but the landing fees tend to be high, fuel is expensive, and they often charge quite a bit for parking. If you are flying to Orlando in a C172 you would likely land at one of the smaller airfields on the perimeter of the city, say X04 Orlando Apopka Airport which appears to be run by the city and has nice cheap fuel. Generally you don't need to call ahead or make any special arrangements unless you need something special done. You just show up, talk to the FBO and they will find you some ramp space to park your plane. Ramp fees widely vary from free, to free if you buy some gas, to a few bucks a day to somewhat egregious at fancy airports.

Landing and parking are controlled by different entities. Clearance to land at a towered field is granted by the tower, at an non-towered field there is no clearance required to land. Once on the ground your ability to park is controlled by the FBO's or airport owner.

US airports are broadly divided into public and private. Public means anyone can use them, usually because that was a condition of receiving public funds, and private means you need the owner's permission.

Most private airports are either a grass strip on a farm or a neighborhood of hangar homes, so few people other than the owners have a reason to use them anyway. Of course, anyone can use them in an emergency, which trumps all other rules. Hopefully your trip doesn't involve an emergency, so you can ignore those.

The vast majority of planes, however, are at public airports. Nearly every county in the US has at least one, and most cities have several; they are far more numerous than the small subset (a few hundred) served by airlines that the general public thinks of.

However, the public funding often covers just the runways and taxiways, and the ATC services (if any). At many airports, the parking areas are owned or leased by a Fixed Base Operator (FBO), which may charge parking and handling fees. However, such fees are often waived if you buy fuel or other services from them.

FBOs appreciate you calling ahead, but most customers just show up, as with any other retail business. In most cases, the only paperwork is the bill/receipt.

I like to break it down as commercial airports and general-aviation airports. The latter doesn't have a TSA presence with the usual luggage scanners, etc., because they don't have any passenger operations other than charters and private flights.

Commercial airports will take GA traffic, but may deter it with high fees if they don't have the space (SFO) or slots (Heathrow).

So you have a lot of airports - certainly the wide majority - that are all-GA all the time. A lot of airport authorities have them as bookends - like DTW (commercial) and YIP (GA).

Some are both at once. Take OAK, which on paper is a stupendously busy commercial airport, and you'd think "oh noes, they can't take GA traffic!". Actually, all that commercial trade flies from a single runway, 12/30. The GA side is a sprawling operation, with two Learjet runways 10R/28L and 10L/28R, and a Cessna runway (15/33). The 737s don't want those runways because of the 20 minute taxi to the commercial side. And the GA side is spectacularly underused, despite having capacity for SFO-tempo GA flight ops. (Location notwithstanding, might not be a bad place to hold "Oshkosh", you could even send the DC-3s and An-2‘s over to 12/30 so they don't disrupt the flow.)

This has nothing to do with "international" or not. That has to do with whether Customs & Immigration has established a port of entry there. Which you must pass through for your first landing in a country. Near borders it is common to see GA airports that are international. For instance OAK is international for the commercial and private jet flights to Canada and Central America, not the Cessna crowd.

There are also military airports, which are off-limits unless you are having a problem (see the first few minutes of Strategic Air Command). In that case, don't be the guy who ran out of gas as flying right over top of Dover AFB. When Dover controllers heard about that, they said "he...should...have...asked..."

Not the answer you're looking for? Browse other questions tagged flight-planning aircraft-storing or ask your own question.

8
How are Landing Fees Collected?

8
How to find flying directions (similar to driving directions) for navigation?
10
How well can an airplane which is tied down be protected from a blizzard?
6
How can I avoid downdrafts and icing when crossing the Alps in a small airplane?
4
When does the airline check if an airplane can reach its destination?
7
How can you navigate "Writing" onto FlightRadar Plans?
25
How can a private pilot prepare for a long cross country flight in an unfamiliar area?
0
NASA's flying telescope SOFIA — How to find flight plans and real time location?
1
How should airline pilots find out about military activity along their route?